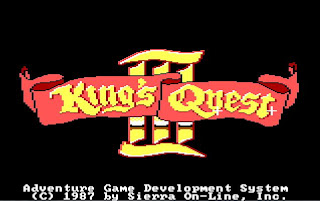 It's 3 out of 5 games for Sierra and I have a feeling the ratio is only going to increase in the shortterm.

Déjà Vu was a challenging and fresh experience for me, but the fifth game on the list takes me back to the nostalgic and familiar King’s Quest series. This time it’s the third game in the series, King’s Quest III: To Heir is Human, which was released in 1986. It’s the last King’s Quest game that I’ve played (and completed) previously, with around a decade passing between first playing the game as a young boy and completing it as an adult. The holdup wasn’t due to it being extraordinarily difficult, although it is quite a challenging adventure game. Instead, it was caused by Sierra’s sneaky copy protection scheme, which in hindsight caused me to waste many hours of my childhood trying to achieve the impossible. You see King’s Quest III was the first Sierra game that required information that was only available in the manual, and since I was playing a pirated copy (The Adventure Gamer does not encourage pirating games, but let’s just say I played just about every Amiga game ever made as a kid), I didn’t have this available to me. After purchasing the game many years later I was eventually able to make sense of my original failure. 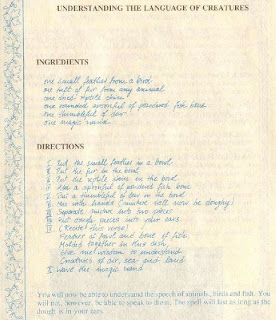 I really could have used this information when I was about 11!

After the success of King’s Quest I and II, Roberta Williams understandably got a very similar team of developers together to produce the third game in the series. One notable change was that Al Lowe stepped up from only handling music on King’s Quest II to a Lead Programmer on King’s Quest III. The experience he gained on this project undoubtedly gave him the knowledge and confidence to produce the Leisure Suit Larry series a year later, but that’s another story. Speaking of stories, the game moves away from Daventry and the exploits of King Graham and instead takes place in the land of Llewdor. A nasty wizard named Manannan has been kidnapping young males from surrounding areas to become his slaves. He gets these boys to do his bidding, but as soon as they show any sort of reluctance or signs of rebellion, he simply kills them. He soon realised that all of his captives would dream of freedom by the time they reached manhood and so any that made it to their eighteenth birthday would be turned to ash regardless. Manannan’s latest slave goes by the name Gwydion, a seventeen year old from Daventry, and it’s the players task to escape from the wizard and find a way home. 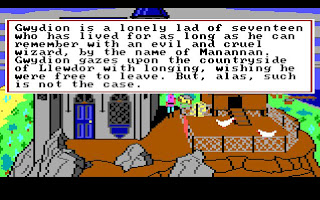 Interestingly, the apparent departure from Daventry and absence of King Graham led many critics and fans of the series to immediately criticise Roberta for ignoring the series’ history. How those fans must have wanted to swallow their words if they ever played the game through to completion, as there’s actually a very strong connection. There’s no doubt though that the shift would be off-putting for anyone coming in with expectations based on the story and characters of the first two games. Once again I’ll be playing through the original game, albeit the slightly improved version that uses the AGI V3 engine that was released in 1987, and not either of the unofficial fan remakes that are out there. If my recent experiences with King’s Quest I and II are anything to go by, I imagine a lot of the part III is still holding residence in my brain along with the theme song for Teenage Mutant Ninja Turtles and the names of all the streets of Monopoly. I recall the first part of the game being based in real time and having to do things at certain times, so we’ll see how much my foggy memories can help me out with that. It’s time to kick some wizard butt! 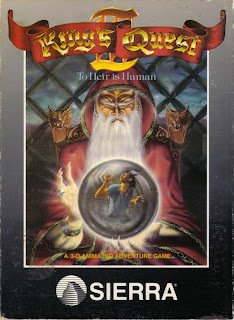 The original box artwork for King's Quest III
Posted by The Trickster at 21:54