King's Quest VI - Fantastic Breasts and Where to Find Them

When we left off last time, Alexander had just entered the Minotaur's Labyrinth and fallen down a pit, with the game giving me a clue that the Cliffs of Logic aren't the only place on this island where I'd need to refer to the manual.

I check out the manual's “The Catacombs” section for clues. The manual tells me that “The Ancient Ones built death traps into the catacombs and filled it with dead-end paths, maze-like corridors, and rooms where secret knowledge is needed to pass.” Sounds intriguing.

Reloading to before I enter the catacombs, I quickly go back to the Isle of the Crown to make sure I've got the tinderbox before properly exploring the underground catacombs. While there I try to give some of my other items to the pawnbroker.


I can't actually remember where I got that brick – I could go through my save games but screw that, let's just say I somehow have a brick in my inventory. 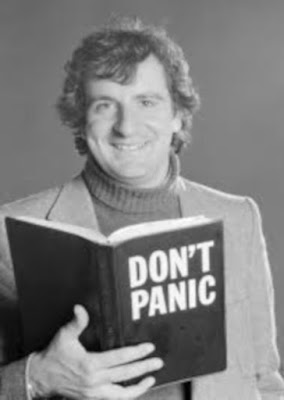 In the mid-1980s, Douglas Adams’s career was firing on all cylinders. A comic writer since college, best known for his collaborations with Graham Chapman and Monty Python’s Flying Circus, he was writing for classic Doctor Who at arguably its creative height and had just launched the juggernaut that was The Hitchhiker’s Guide to the Galaxy. It was in this spirit that Mr. Adams, in conjunction with Steve Meretzky, created one of the finest and most famous of the Infocom adventures.

This is not that story.

This is the story of the other official Hitchhiker’s Guide game, the one scrubbed from store shelves to make room for the Infocom work. That game was written by Bob Chappell and published by Supersoft in 1981. I’ll be diving into the more famous game next week, but there is something tempting about playing a game that you aren’t supposed to be able to play and I just could not resist. I’ll give a basic introduction to the Hitchhiker’s Guide and Douglas Adams this week, focusing instead on the story of this “lost” adventure game; next week will have a proper introduction as part of the series on the Infocom game. Grab your towel and remember to “Don’t Panic”.

When we last left Alexander, he had just visited the edge of Chessboard Land, and was hanging out in the garden of pun-named flowers, being hugged to death by the clinging vines.

Reloading after being smothered by the clinging vines, I tried something I didn't try earlier for no reason other than I hadn't thought of it - I gave one of the baby's tears some milk. This just made the other babies cry harder (and louder.) I try to take the bottle back to share it around, but that doesn't work.

I go back to the milk bottle brush so I can give each baby some milk, but Alexander won't take more than one bottle of milk at a time and after returning to the garden with a new bottle, the milk bottle I'd given the baby earlier had disappeared.

After drowning in the swamp trying to get to an anthropomorphic stick, I thought it was time to try a different island.

Our Hero-U Month has come to its conclusion with the launch of Hero-U and the interview with Corey Cole, and so it is time to decide what to do with our official TAG banner. We could just return to our old Monkey Island banner, but since that would be a dull move, we've decided to hold a TAG Banner Contest!


When we last left Alexander, I had just found a ring I hadn't noticed earlier.

In the comments of that post, I was informed that the ring was mentioned either in the manual or a 'help' section of the game itself.

It wasn't in the manual, but it WAS in the 'About' section of the settings screen. 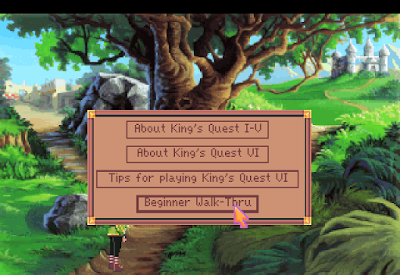 After clicking on that section, then the “Beginner Walk-Thru” section, and clicking past the spoiler warning, I get to the walkthrough (walk-thru??? spell it properly, game – you're not a burger restaurant) and the second step was the one I missed.


When it takes me awhile to discover the second step in the beginner walk-thrOuGH - that doesn't bode well for my skills. Oh well.

I clicked through the rest of the walkthrough quickly but may have inadvertently spoiled myself to something else I missed. I wasn't reading it in detail, but thought (or thut, as the game would spell it) I saw something about moving an item on the beach. Hmmm.

Introduction by Joe, questions by the TAG community & editors


As we wrap up our special “month long” coverage of the launch of Hero-U: Rogue to Redemption, we want to close out as we began: with the personalities and stories behind the games. To that end, our community and editors put together a set of interview questions which Corey has been kind enough to answer for us even while he and Lori were putting the finishing touches on their game launch. Well, the day has finally arrived and Hero-U is available for sale! Please have a look at our our review of a pre-release version and check out their game on Steam, GOG, or other places where independent games are sold.

When we last left Alexander, he'd slept through the opening credits and awakened on a beach in what we assume is the Land of the Green Isles.

Following my usual M.O., I start by clicking on things with my 'eye' icon. I notice that if I look at things that don't have descriptions I get a description of the area itself.


I go north, and find a tree with a hole in it. There is nothing in the hole and talking to it gets no response. I make a mental note to remember this hole as I expect something will happen with it later.


I like that I can see what I'll find if I take one of the potential exits – there's a town to the left and a castle to the right. I decide to try the town first.