The human brain is an amazing thing really. It’s been over a decade since I last made my way through King’s Quest and yet not only does it seem familiar, I reckon I have around 90% of the solution stuffed away in the recesses of my mind. Why my brain has retained this sort of information I have no idea, but it might make a few of these early Sierra games quicker for me to blog through than it would have otherwise. It seems old habits do indeed die hard also, as on starting the game, I immediately set out to play the game the same way I would have as a kid. That involves mapping the entire play area, collecting items wherever I come across them, with the sole intention of completing the map before getting stuck into the quest itself. This is very easy to achieve with King’s Quest, as Daventry is basically an 8 x 6 grid of screens that wrap around on each other once you reach the end. In other words, if you go south for six screens you’ll end up where you started. 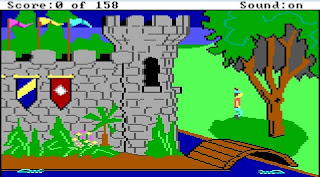 As a kid playing the game on my Amiga, I would have drawn this grid on a piece of paper. These days I use Excel, a trick I was forced to learn when playing through Might and Magic I a couple of years ago. Using Excel is great, as you expand the size of the cells or add new columns and rows whenever required, rather than being stuck with the piece of paper you started with. So to give you an idea of what my screen looks like while I’m playing games for this blog, I have DOSBox open in a small screen at the top left, the Windows 7 Snipping Tool bottom left (I need it easily accessible so I can grab something on the fly), and Excel covering the right side half of the screen. I also have a Word document open (but generally minimised) so I can write down any notes for the game or the blog as I go. I’m sure there are other ways that work for other people, but this system feels comfortable and achieves my goals with little difficulty. 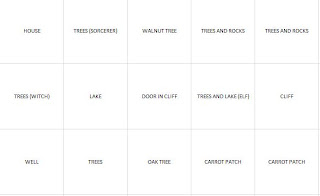 Primitive I know, but then so is the game.

I’d forgotten how short adventure games were in the early days. My first session on King’s Quest was only one hour long and yet I’ve racked up around 50 of the 158 possible points already. I’ve covered and mapped over two thirds of the screens in the game, and collected a bunch of stuff including a carrot, pebbles, a dagger, some cheese and a golden walnut and egg. The only reason I didn’t get further in that hour was because my character (Graham) walks incredibly, painfully slow. Watching my character move in slow motion across the screen while I’m being chased by a witch is as frustrating as it is comical. I seemed to recall that last time I played the game, I’d set the speed to fast and ripped my way around Daventry, but when I attempted this technique this time around my character raced through three screens and plummeted into the water before I could blink. It might be that this is something they corrected for later Quest games, but can anyone advise on how to increase the speed without making the game unplayable? 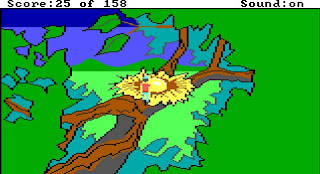 This is not the sort of thing you want to try at 500kms/hr.

One obvious difference between this, the first true animated graphic adventure game, and more modern games, is that you can very easily do things in the wrong order, making the game impossible to finish. This would never be allowed to happen in modern adventure games, where you can safely assume that every time you enter a new section, you’ve either already got the tools you need to complete it, or they’re somewhere in the section itself (normally a combination of both). This is unlikely to occur to me all that often in King’s Quest since I kind of remember what items I need to get passed certain sections, but I did find out the hard way that catching a ride with the eagle prior to getting the cheese and the fiddle (or the four leaf clover) first doesn’t end very well. Still, it’s easy enough to load a saved game prior to grabbing the bird and look for the items that might be able to assist. Apart from the slothfulness of Graham, playing King’s Quest is an enjoyable and highly nostalgic experience so far, and I feel like I might be able to get through it in just another hour or two, unless there’s something I’ve entirely forgotten about. 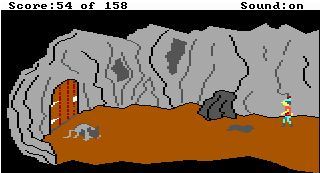 Oh I remember this! I just feed the rat the cheese that I got from...um...aaarrrggghhhh!!!
Posted by The Trickster at 16:15

Email ThisBlogThis!Share to TwitterShare to FacebookShare to Pinterest
Labels: 1984, King's Quest: Quest For the Crown