I can now categorically say that Déjà Vu is a challenging game made more difficult by unreasonable time limitations. I’m gradually getting one step further before dying from whatever it is I’ve been injected with, at which point I reload (or start the game again if I think I can do things a better way) and try to get back to that point as fast as humanly possible. This harsh time limit, as well as the way the game is constantly reminding me that the cops are right on my tail, is basically causing me to rush and panic through scenes rather than investigating things properly the way I’d like to. The CGA pixel hunting is without question the main source of frustration though, as items are all but invisible in the highly pixelated shades of pink and blue. Since I last posted, I’ve gone through each screen like a fine comb, trying to find any small items that evaded my attention the first time around. I’ve found a few too which makes me wonder what else I’m still not seeing! 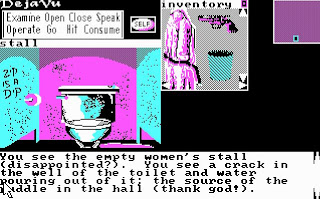 I might have seen the earring on the top of the toilet if it looked like an earring.

As if these aspects of the game weren’t difficult enough, death is seemingly around every corner anyway. Go too far down the street and you fall to your death at a worksite with no warning. Every time I run into the “nice looking lady”, no matter what I try to do, she shoots me point blank. This isn’t really a game that you can use careful, logical thinking, and make it through unscathed. It’s a game where you learn harsh lessons, reload, and through trial and error, make progress one step at a time. There was one other issue that I was all set to complain about, and that’s cash. I was running out of funds really quickly, and given that you need to pay cab drivers constantly, I couldn’t for the life of me figure out how I was going to get any further. Thankfully, I’ve just figured out that you can gamble at the casino and within a couple of goes on the pokies will win enough to not have to worry about it for a while. 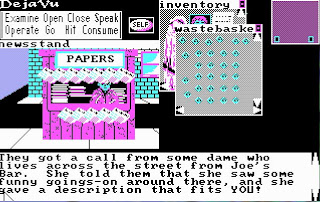 No-one questioned the guy walking down the street with a bin filled with quarters.

Déjà Vu doesn’t appear to contain any profanity (at least I haven’t come across any yet), but it doesn’t pull any punches when it comes to descriptions and graphically recounting the many ways you can die. Sometimes it’s fairly humorous stuff such as “You’re in a swanky penthouse pad. One look, and you instantly feel that the owner of this place deserves to be shot.” Other times it borders on tasteless, with my personal favourite being “the blood begins to fill your lungs and overflow out of your mouth and nostrils. You realise with horror that you will be found dead without a proper change of underwear”. The nasty tone certainly fits the harshness of the world you’re in though, so this is not a complaint, merely an observation. I’m actually looking forward to discovering a way to pump that “nice looking lady” full of lead! 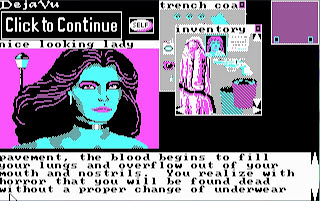 Yes, I imagine that's the first thing that will run through my mind the day I'm shot in the chest.

I’ve still got a couple of leads to go on in my next session, so I don’t have that horrible feeling that you get when you know you’re in for a frustrating time next time you press play. There are currently two doors that I haven’t been able to find keys for and I’m really hoping that a cure for my condition is behind one of them (Doctor Brodie’s office). If I can’t find a solution to the time limit problem soon, I’m likely to start using a bit of profanity of my own, so the language of my next post will probably give you the answer. It probably sounds overly pedantic, but I’m sure I’d find more enjoyment in Déjà Vu if I only had time to sort my inventory in a logical way. If I even try to put all my coins in my wallet, the game will punish me by telling me my condition has deteriorated further and I’d better do something quick before I become a vegetable. OK…a few deep breaths…I’m going to crack this bad boy! 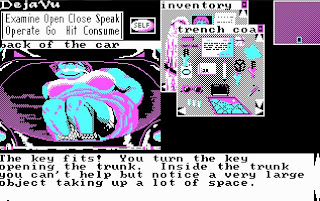 I was kind of hoping to find a box full of keys. What am I going to do with a dead fat lady?
Posted by The Trickster at 17:20