In 1984, Dr. William H. Kraus was a rare breed: one part game designer, one part Doctor of Philosophy in Mathematics Education. Up to this point, the games he had designed were simple, one-trick teaching tools for students in K-5. That was related in part to his academic bent: unlike most designers, he was concerned about quantifying and documenting the improvements his students saw while playing educational games. As he was sitting down to write what would be the first of three adventure games to break that mold, he made a prediction:

“In the not too distant future, it is likely that at least one microcomputer will be found in most elementary school classrooms and that teachers will wonder how they ever got along without them.” - “The Computer as a Learning Center.” Computers in Mathematics Education: 1984 Yearbook, edited by the National Council of the Teachers of Mathematics.

Kraus never became a famous game designer. Perhaps his games were too stuffy and academic. Perhaps his evidence-based approach to teaching fun didn’t quite translate for enough students. Or perhaps, he just enjoyed doing the research that would benefit future teachers and educational game designers. Whatever the reason, his short design history has left us with only three adventure games: 1984’s Adventure Alpha and The Islands of Beta, and 1985’s The Lantern of D’Gamma. I looked at the second of these games five years ago, but now that archivists have discovered the missing original, I wanted to revisit these happy memories of my childhood again.

You may have been expecting a Space Quest V post this week. Unfortunately, due to a computer emergency (and the discovery that I cannot write a blog post without the use of the letter “R”), my laptop has been shipped away for repairs. My write-up of Adventure Alpha has been sitting in the “draft” bin since the start of the COVID epidemic. With a borrowed computer and browser-based emulation, I was able to put in the time to finish the write-up. I hope you enjoy this diversion from our regularly scheduled content.

The area I left off in is definitely unpassable. Alice can't jump onto ropes, nor can Alice float onto a nearby platform. The doors definitely link back on each other, no trickery like last time. The only doors, which don't really look like small doors, but we'll go with that, are ones Alice is too big to fit into. What can Alice do? What can Alice do? She won't starve to death yet, since she has cakes. Its probably been 24 hours at this point, so she's probably hungry anyway...

Dare To Dream – In A Darkened Room 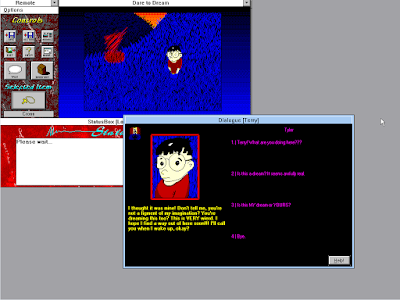 We’re back in little Tyler’s dreamland! I’ve decided to play one hour at a time in order to remember everything important for this write-up. Also, I need some kind of structure. Thirdly, I’m not bent on going crazy because of all the pixel-hunting. And let me tell you, it has already been quite the test.

Each chapter represents one hour of gameplay, accordingly. The first chapter is very short. Let’s hope it won’t always be like that…
Read more »
Posted by Ilmari Jauhiainen at 23:00 5 comments:

As we start this week, I’m of two minds. On one hand, Space Quest V has exceeded my recollections and expectations. The plot, the whimsy, and even the Star Trek references are hitting just right. The presence of a central ship and crew sets it apart from the other games in this series, fleshing out Roger’s world more than the “road movie”-style events of the previous games. On the other hand, I’m just about ready for the game to be over. Maybe it still has surprises in store, but it would be nice to come to the end this week or next.

As the title suggests, this week’s events borrow heavily from 1986’s The Fly starring Jeff Goldblum. As discussed in the comments on a previous post, I deal very badly with horror (and especially “body horror”) films, so I know it only by reputation. I encourage commenters to point out anything that I might have missed, but I suspect they borrowed little more than the idea that a transporter accident with a fly could cause wacky hijinks. This week also brings us the usual collection of Star Trek jokes, plus a pinch of Star Wars and a dash of Lassie. If I missed any references (anything from 2001?), let me know.

Requiem for the Brundlefly

Captain’s Log, Stardate: Saturday morning and I’m missing my cartoons! Beatrice has been saved! Well, sort of. After responding to the Goliath’s distress call, we found only a single escape pod on the planet. After much heroics on my part (and absolutely not losing my pants in front of my future wife), I rescued the ambassador just as the mutants that used to be the Goliath’s crew attacked. Alas, the Ambassador was infected by the mutants before beaming up and we had to place her on ice. Now we wait. Can my little garbage scow stand up to one of the most powerful ships in the fleet?

Written by Morpheus Kitami
I do not often make maps. Most of the time, I am capable of orienting myself in a video game perfectly well. My memory is all that I need. Perhaps years of playing '90s FPS games and classic survival horror titles have given me that talent or it was one I was born with, the world will never know. Usually if I need a map I just hope one is online. Having to make a map is something I don't consider a mark in the game's favor, perhaps that's why I've never committed to playing Dungeon Master or any other map-needed game titles. I've only made one map before, and that was for Isle of the Dead, and I won't spoil the reason for that since it has yet to be played on this blog.
But I decided to do a map for this game based on one reasoning, the game expects me to write down the times and locations of characters. There's a chart that comes with the game, where you're expected to do just that. Because I don't do this often, I'm not using some fancy software or anything. I'm just using my usual graphical software, adding various marks where something is, and writing down the characters schedules.
Read more »
Posted by TBD at 16:00 4 comments: