In my previous post, we took a gander at the manual and discussed the history of the developers, but not much was said about the game itself, so let’s get cracking (literally) on that.

I start off as Doug Nuts. (So no quiz-based character selection as of yet.) He’s underground in what looks like a sewer and has seemingly huffed and puffed his way through a brick wall and is now facing something that looks suspiciously like a bank vault. 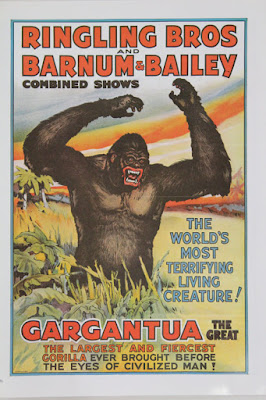 From 1980 to 1986, Infocom charmed the gaming world with their text adventures. I’ve just defeated Ballyhoo, their 19th and final independently-released game. It’s a moment that I want to savor, even as we have a whole bunch more games to go before we get to Return to Zork. It seems crazy to me that I’ve been writing about Infocom games for nearly three years and I’ve just now reached this point. Ballyhoo has been a nice surprise to end this first leg of the Infocom saga on: a game that is far from perfect, but more than I might have expected given its reputation.

We ended last week with the realization that half the circus crew was involved in the kidnapping. We have connected the ransom note to one or more of the clowns (although which ones are less certain), we know that Rimshaw hypnotized someone with the headphones, and we know that Andrew and the new lion tamer are also involved. That’s a decent chunk of the circus crew, but I have no idea what they hope to get out of the deal. It doesn’t all add up yet, but it might make more sense if I get my hands on the ransom note.

I had to look up more hints than I would have liked to close out this game. If I had more time, I would have done a “Request for Assistance” but I’m writing this now as we’re just about to post final ratings for Rome and Enchantia. The clock is ticking for me to play Batman Returns so I hope you will excuse the desire to get to the end. You’ll see the reasons why I needed hints in a moment, but overall I found that the game doesn’t quite hold together as well in its final puzzles. I’m eager for your opinions, even if you think I just dropped the ball.

Oh this is going to be a good one. Like I said in the first post, I’ve already tried playing Enchantia a very long time ago but never really got past the underwater section. Now that I’ve been forced to do so, I discovered what can only be described as a masterpiece in bad game design. Let’s see how it fares in the PISSED system. Spoiler alert: it probably won’t go very high.

Written by TBD with Reiko

In a rare case for The Adventure Gamer, this game was actually played by two of us. Reiko introduced us to the game and started it, making the first gameplay post, and then I took over when Reiko was unable to complete it. As Reiko was fairly early in the game, I started it anew, quickly playing through the first chapter in order to catch up.

And as I played the game, it grew on me… grew on me like a malignant tumour. I started off finding it acceptably average, but it quickly became tedious as each chapter devolved into a game of trial-and-error, and sometimes the worst form of trial-and-error, where the randomisation had me continually try the same thing over and over until luck fell my way.

That’s it! I conquered Curse of Enchantia! I slayed the beast! Victory! Free at last!

I have mixed feelings about it. One part of me is very proud to have done this without a walkthrough (even if the temptation was very strong a few times) and the other part is astonished by the vacuity of the whole thing. I think my soul has died a little by playing this game to completion. Good thing it was for the blog, if it helps at least one person to stay away from this game in the future, maybe my sacrifice wasn’t for nothing.

But for now, let’s all go back in the enchanted land of Enchantia one last time in order to help Brad get rid of the evil sorceress once and for all! Yay! 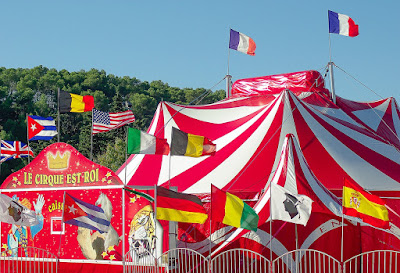 Welcome back! Last time out, we started into Infocom’s fourth mystery game, Ballyhoo. Unlike our previous mysteries, this one is not (yet!) a murder. Instead, we have a kidnapping… at a circus! We will have to use all of our investigative skills to find out who kidnapped the owner’s daughter and why, even though the owner doesn’t know we are helping and probably wouldn’t be that thrilled to find out that some random patron was snooping around his circus after closing time. Why are we doing this again? Because we secretly dream of the Big Top ourselves! And of being a detective, apparently. Actually, I have no idea why we’re doing this but someone has to save the girl and so it might as well be us.

I apologize for the small delay in getting this out. We’ve had “plague house” here at the local Infocom Marathon Headquarters and so much of my time has been spent either being sick, cleaning up after others being sick, or both at the same time. It doesn’t make for the best head-space for writing about a fun-filled circus holiday. To compensate, I’ve made this entry a bit longer than usual. As they say, send in the clowns!


Two years after my first ever playthrough for The Adventure Gamer, I’m finally up for another. Quite the gap, but - surprise! - we’re still doing games from 1992! We sure are taking our time here, or perhaps 1992 was just a particularly bountiful year. Either way, the next game up is Nippon Safes, Inc. This game was developed by Dynabyte software, an Italian game creator. I couldn’t find a lot of information about this company, but running a couple of Italian wikis through Google translate helped a little.

Hector’s Journal #4: "The Emperor considers me a threat to his power. I'll show him a threat. I'll curry Cleopatra's favour and see if she can help me oust the Emperor. I'm sure I'd be at least as good an Emperor - I can eat grapes and raise taxes all day with the best of them... and I rarely argue with shrubbery..."

When last we looked in on Hector the slave owner, invader, pillager, briber and attempted assassin-hirer, he'd just been made a Consul and sent to Egypt to protect Cleopatra.

It seems Cleopatra's throne is being threatened by her brother, Ptolemy XXIV. Now, I looked up Ptolemy XXIV and couldn't find him, but Google pointed me to the Wikipedia page of Ptolemy VIII instead.

Curse of Enchantia - In the Nose of Madness

Just when I thought this game couldn’t get any weirder, it throws you a curveball and creates the most mindf..king world I’ve seen in a long time. Let’s just say this part of the game would make the island of fairy tales in King’s Quest VI look like a perfectly normal office bullpen. But first things first, I had to reach the next part, which is easier said than done when you’re back in the same town area without any change and no idea on how to progress in the game… 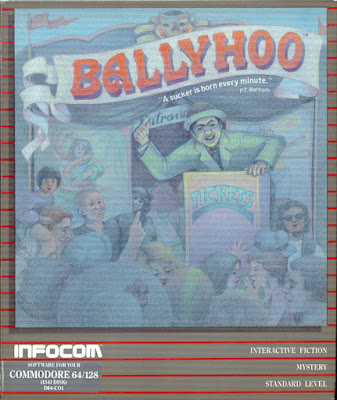 Infocom careened into 1986 on the backs of two contradictory pieces of information. Sales had been up in 1985 for an all-time high of $11.5 million, and yet the company was falling apart. The Cornerstone flop was a distant memory, but the winter layoffs that followed were not. Marc Blank, founder and co-developer of the Zork series, Deadline, and Enchanter was out. So was Al Vezza, the CEO. Mike Berlyn had left even before Fooblitzky had been released with the graphics team as one of the layoff casualties. Infocom was in active negotiations with Activision for a buyout, although how much of this was known during the development of Ballyhoo is unclear. What is clear is that the announcement of Activision’s intent to merge came out within days of Ballyhoo’s release. This would be the last game ever released by an independent Infocom.

Into this maelstrom entered Jeff O’Neill, a first time Implementor. Originally from California, he came to Infocom with a background in journalism and a smidge of computer science. He put those skills to use doing QA on Wishbringer, Hitchhiker’s Guide, and likely other games. He also subbed in as a writer for the The New Zork Times, the company newsletter. Unlike many of the other Imps, Jeff has kept his privacy post-Infocom and so we know less about him than other team members. We’ll see his touch here and in Nord and Bert (1987), plus he was one of the contributors to Bureaucracy (also 1987). I look forward to getting to know him through his games.