I ended the previous post on a slightly slow-moving note, if I can call it that. For the umpteenth time, I needed to find 100 yen for a metro ticket. While I didn’t flag that post as a request for assistance, I nevertheless found myself unable to obtain the necessary funds for the duration of my next play session. So I went ahead and sneakily requested some hints in the comments section, and luckily, Vetinari yet again came to my aid. I’m not sure what to think about the solution to the problem, but at least it again confirms my theory that the game interface is doing its utmost to fool me at every opportunity

Every family has its weird uncle, and mine was no exception. 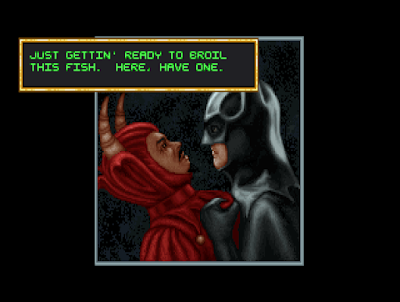 He is the terror that flaps in the night. He is the baloney sandwich that sits too long in the office refrigerator of crime. He is… someone else entirely. But where were we? Oh, right: Batman Returns, a completely different type of night-flapping terror. Last time around, I lost the game. I was supposed to find a blackmail tape that Penguin planned to use to throw the public against our current mayor, but I failed and Penguin broadcasted it to the city. He won the special election and Batman was humiliated. Even worse than that, I was back at square one to work out what I missed that led me down this dark path. For this post, I plan to play the whole game over again to see what I missed. If I could not find the solution, I would either leave the game as a “Lost!” or do a Request for Assistance.

At the risk of getting ahead of myself, I found the missing item quickly in my second playthrough. What follows is a second pass through the whole game, highlighting the things I missed the first time before continuing onward to the end. If you need a refresher on what I already found, you can always check out the previous post. I intended to present this over two weeks, but real-life challenges meant a delay in getting the first part out. Please accept this double-sized post as an apology.

After tackling the problems of Doug Nuts (the smart) and Donna Fatale (the sexy), time has now come to meet Dino Fagioli. Yes, the stupid. And boy is he ever! But more on that later.

Dino’s chapter doesn’t start outside the prison like Doug and Donna’s, but rather in the office of the prison governor. Since Dino doesn’t have any prior criminal record, the governor wants to give him a second chance and offers to get him a job at the museum.

In my last post, I managed to get sort of stuck. I imagine I could’ve brute forced my way through, but there’s only so many times one has the patience to try every action on every screen. Luckily commenter Vetinari came to my rescue with some much needed hints on how to proceed.

I only had a couple of items in my possession, but one of them was a saw, and I was pretty hung up on trying to make the saw in this chapter as useful as the wrench in Doug’s. Alas, what was needed was the “bowl” I found outside Doug’s apartment, that was in fact an empty perfume bottle ( or “flacon” ). Well, after filling this up with water from one of the fountains in the park, I can now go to the department store, pass the bottle off as a new one and ask for a refund.

If 1980 was the year of programming for Med Systems with a total of 14 releases advertised in various magazines, 1981 certainly was the year of advertising. Many Med Systems games, among them Deathmaze 5000 and Labyrinth, got more attention with belated reviews – in fact, Rat‘s Revenge which was released in September 1980 was only reviewed by the 80 Microcomputing Magazine in November 1981. This was all part of a larger focus on the TRS-80 as a gaming platform: Scott Adams’s Adventure International games had taken hold on the Tandy, and “micro games” certainly were a new trend.

While Med Systems released only five games (four of them adventure games) in 1981, they got a lot more media attention than before. The August 1981 issue of the 80 Microcomputing Magazine is especially noteworthy, as it contains a feature about micro games which quotes William Denman as well as an interview-based article about Frank Corr. Furthermore, the company name pops up in a few more general articles, and their 3-D adventures had apparently become a brand of their own. In the October 1981 issue of the same magazine, Med Systems was able to afford three full-page ads back to back which is quite an investment. The prices are probably not comparable with, say, late 1990’s game magazines, but still this makes Med Systems one of their major customers.

I’ll go into more detail about all of this once we reach the 1981 summary of this marathon but today I’d like to talk about Asylum. Now this is not only the most famous Med Systems game by far but also one with a very confusing backstory. When I started this marathon I thought that this was the game that had piqued my interest as I used to play an adventure game called Asylum on the Commodore 64. However, that was its sequel Asylum II (1982) which was renamed as Asylum for all subsequent 1983 (Atari) and 1986 (Commodore, DOS) releases. The 1981 Asylum is entirely new to me, and I’m looking forward to playing it quite a bit.

Asylum is another maze game but with more adventure elements than the previous ones. It is also the third part of the so-called “Continuum Series” but that brand name apparently only came up in late 1981. In Mike Nadeau’s aforementioned article about Frank Corr (titled “Frank Corr – Making the Ultimate Maze”), Corr suggests that in Asylum everything was “twice as good as Deathmaze”. He attributes that to a new routine they used to store graphics as data. Asylum is also supposed to be a lot easier than Deathmaze which suggests that there are possibly not so many arbitrary puzzles in it. I’d like that! The game was co-written by Corr and Denman and released in February 1981. Its vast success apparently led to a sequel, programmed by Denman only. This is also the last we’ll hear of Frank Corr although it seems that he had great plans for his next game which was supposed to be set inside a space station or a similar setting and use octagonal rooms. 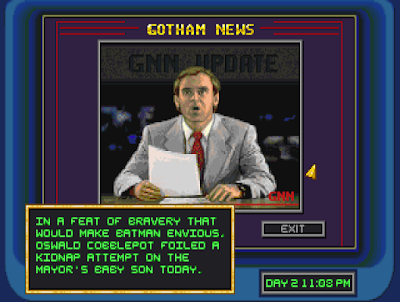 Who’s the dark knight detective that’s a hit with all the chicks? Batman! Your darned right. Welcome back to Batman Returns! Last week, I completed the first day by discovering (and stealing) an innocuous awards ceremony tape from the mayor’s office. We spent the day exploring and dealing with thugs from a circus gang, but did not spy either Penguin or Catwoman. Thus far, the game feels a bit thin with empty areas and not a lot that to explore thanks to the verbless interface. That said, the graphics are quite good and I’m enjoying bits of Danny Elfman in the soundtrack-- his Batman theme is one of the musical highpoints of my childhood and adds so much to this game.

And yet, you might sense that something is off. As Alex Romanov noted in the comments to my last post, I made a critical mistake that I did not discover until the end of this session. Things didn't go well for the Caped Crusader. Rather than whitewash it, I will narrate what happened and you can see for yourself how I spent the next four hours of play time. I am not sure whether I was completely doomed after the first day’s mistake or if there was some way that I could have recovered, but either way this is a “Lost!” post. I will try again from the start next week.

Missed Classic: The Archers - Won or Lost? (With Final Rating)

Last time I managed to complete two of the four parts of The Archer. Now, it's time to try the two remaining ones.

Nippon Safes Inc. - Been There, Donna That (Request for Assistance)

The perceptive reader will know that in my previous post, I finished Doug’s chapter. It ended with him being knocked out by a mysterious stranger as soon as he’d escaped with the Jade Buddha he was assigned to steal from the Saku-Rambo monastery.

This means that it’s time to pick a new character to play. And for the very good reason of “why not?” I picked Donna Fatale, whose most important character trait - as we learned from the intro - is being sexy.