It’s time to apply the PISSED rating system again, this time to King’s Quest II: Romancing the Throne. I’ll say straight off that I’d be surprised if it doesn’t rate higher than the first game, but I’m still getting  used to this system and am not really sure what to expect. Time will tell whether the scores it produces match my general feeling towards games. Right, let’s do this...

Puzzles and Solvability
The puzzles in King’s Quest II are once again based around discovering items that are loosely hidden around the place and then figuring out how to apply them to certain situations. Where things are different this time around is that the game is more linear, and as a result there are far less opportunities (if any!) to get stuck in a location without any way to pass it. If you’ve made it into the mountains, then you must already have the oil lamp, which is all that’s needed to progress. If you’ve got to the tower where Valanice is located, then you must have at least one way to pass the lion, whether it’s through brains or brawn. With this in mind, there are multiple solutions for many of the puzzles in the game. In all of these cases, the path you choose makes no difference to the outcome of the game, but it does affect the points you receive for it. 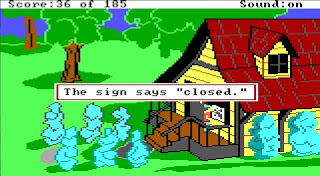 Opening sections of the game after completing a certain task was a big step in adventure gaming!

Interestingly, the more violent the solution you perform, the less points you receive for it, which from what I’ve seen so far, is a feature of the series as a whole (I haven’t played past part III). There’s one particular puzzle that I managed to solve the non-violent way without having any real clue as to how I could have figured it out without purposely trying not to be violent. I knew that killing the snake with the sword would probably not achieve maximum points, so I tried throwing the bridle at it (the only other item I received in that area). Without going into too much detail, it worked! This doesn’t rate highly on my solvable scale and is probably the only case in the game of a puzzle solution that isn’t particularly logical (the boatman puzzle could almost fit here I guess). All up, there are definite improvements in the way puzzles are handled, that not only made part II better than part I, but also made their way into the genre as a whole. It’s a 7! 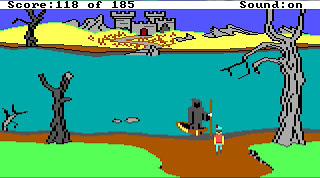 In respect of Chris de Burgh, I ain't paying you until you get me to the other side.

Interface and Inventory
The inventory works the same way it did in King’s Quest I, which is easy to use, so no qualms there. The interface is also very similar; with the two changes I mentioned in an earlier post (the new more suitable speed option and the ability to get a summary of your surroundings by typing “look”) being the obvious improvements. The issues with the parser limitations are still there, as is the immense difficulty in climbing stairs due to the simulated depth perspective giving you absolutely no room for error. Thankfully there are fewer sections that require dexterity, so this latter frustration isn’t as much of an issue. Overall, I feel it’s appropriate to give Interface and Inventory two points more than last time, making it a 5. 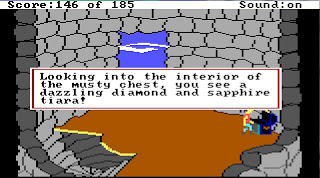 I deserve such a reward for being forced to climb another set of steps with this depth perspective.

Story and Setting
As I made clear in my introduction post for the game, it’s easy to take the piss out of the Romancing the Throne story. It’s so filled with cliché that it’s either very bad writing or a Shrek-like parody of old school fairy tales. I’m assuming the latter, and the comedy that was injected in the game, albeit seemingly as an afterthought, probably proves that well enough. It’s the item collecting and puzzle solving that drove me to continue playing and certainly not the romantic urge to find the most beautiful woman in the kingdom, who was tragically locked in a tower guarded by a lion and whom most certainly would fall in love with King Graham on first sight, who was lonely due to no other woman being up to his high standards. I guess it’s slightly more satisfying than the “find three items and become king” quest of the first game, but only just. 5. 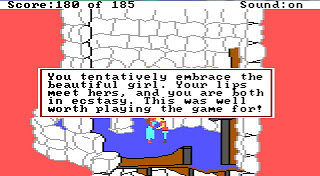 Was it now?! Thanks for letting me know.

﻿Sound and Graphics
The sound in King’s Quest II still suffers from the inbuilt PC speaker sound that so horribly tarnished mid eighties games, but it’s a shame as the fourteen different tunes in the game (including Green Sleeves and the theme song to Romeo & Juliet) fit the content like a glove. Sound effects are just as minimal as they were in the first game and not worth discussing. Graphics were once again created by drawing the outline of objects and then filling them with colour, so the game world has a very comparable look to the first one, apart from the pretty awfully coloured landscape that Graham is confronted with after going through the doorway at the conclusion. I think I’ll stick with a 5 here, despite the slight improvements in music selection and character illustrations. 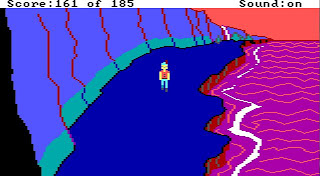 There's a signpost up ahead, your next stop is the twilight zone!

Environment and Atmosphere
While Kolyma does wrap around from north to south, the east and west landscape boundaries somehow give the world more presence. The King’s Quest Companion stupidly tries to explain why things are the way they are as follows: “For reasons forgotten, or perhaps it was whimsy on the part of the multiverse--movement to both the north and south in this part of Kolyma eventually turned back upon itself, contained as if inside some transparent cosmic donut. East and west, one could travel at will until confronted by more physical barriers--the sea or mountains for instance--but those that journeyed far enough north of south, would always get back to where they started.” Huh?! Transparent cosmic donut!? Anyway, Kolyma is another 49+ screens of suitably enchanting landscape, objects and characters, so I’ll settle for 6 again. 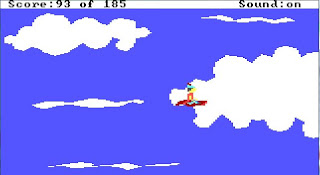 King Graham would go to any length to escape the transparent cosmic donut!

Dialogue and Acting
There are very few moments in King’s Quest II where someone actually speaks to you, and when they do it’s merely to ask something of you or to thank you for giving them something. The large majority of “dialogue” is really just narrative description of your surroundings and what’s going on in Graham’s near vicinity. It’s all simple stuff, filled with cliché (as expected) and entirely one way traffic, but it gets the job done. There are no real changes to the way the original handled this stuff, so a 4 it was and a 4 it will be. 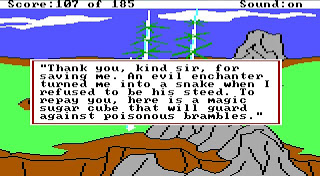 He turned you into a venomous snake? I hope he received a Darwin Award for that effort! 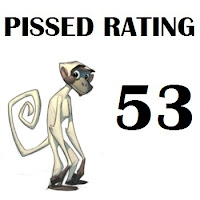 King’s Quest II: Romancing the Throne comes in at 53 on the PISSED rating system, which just beats Below the Root to the top of the leader board. It’s a fun game that improved upon the original, even if it only slightly pushed the evolution of the genre forwards. It’s actually quite funny reading reviews today that were written back in 1985. It’s hard to believe how advanced this game really was for the time! I’ll leave you with a couple of quotes:

“The animated graphics are simply the best we have ever seen on a home computer.” – Computer Gaming World, June 1985

“I still can’t get over the graphics. The trees, buildings, lakes and ocean are all dimensionally correct.” – Antic, May 1986
Posted by The Trickster at 10:17