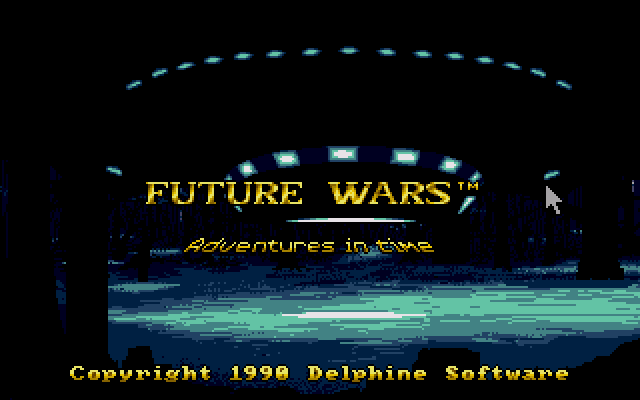 I'm hopeful that this might be the first French game on the list that's actually half decent!

We’re up to game 40 on the playlist, and it’s once again one that I’m pretty interested in. If you’d mentioned the title to me a few years back I would have said that I’d never heard of it, but looking at the screenshots strikes a nostalgic chord that suggests I must have at least started the game on my Amiga as a kid. Speaking of the title, the game goes by many different names around the world, so let’s clarify what we’re talking about here. In North America it was called Future Wars: Adventures in Time, in Europe it was Future Wars: Time Travellers, and in France it was Time Travelers: The Menace. Whichever title was splashed across the cover, the game was the same, and it was released by the French developer Delphine Software International. I’ve had some trouble finding an exact release date, but it does appear that the game was released on the Amiga and Atari ST in 1989, before getting a DOS release in 1990. The DOS version I’ve found has files created as late as the 29th of May 1990, so that’s where I slotted it into the playlist. While we’re talking about versions, a CD-ROM version was released for DOS in 1992. This version had an enhanced soundtrack, but I won’t be playing it for comparative fairness reasons. 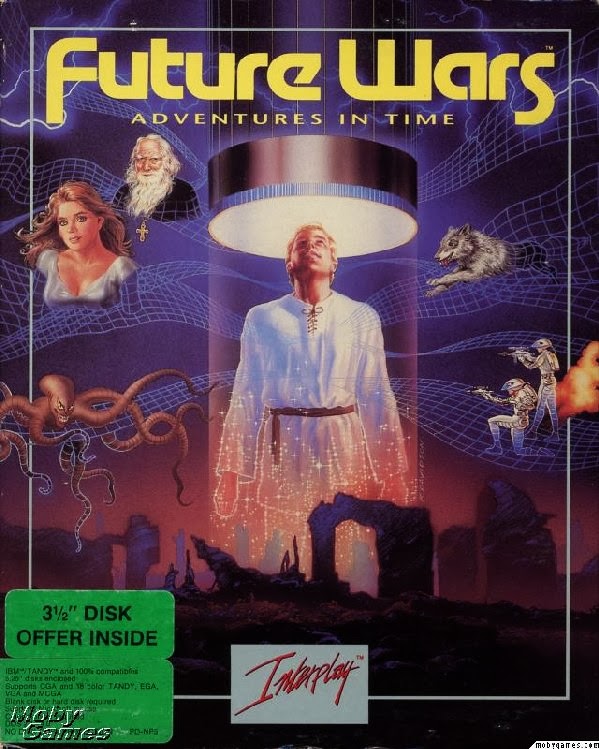 Thank you Moby Games as usual. I don't know what I'd do without you!

Since this is the first game on the list from Delphine, it’s worth briefly looking into who they are and why we should care. If you played games during the 90s even half as much as I did, you probably played at least one game by this legendary French company. They produced three adventure games that utilized their proprietary interface called Cinematique. The first of these was Future Wars and the latter two were Operation Stealth (aka James Bond: The Stealth Affair) and Cruise for a Corpse. Delphine were also behind three cinematic platformers (initially inspired by the ground-breaking Prince of Persia). The three games were Out of This World (aka Another World), Flashback and Fade to Black. These platformers were huge for me, with Out of This World absolutely blowing my mind as a young teenager. The first of all these games was Future Worlds though, and it was created by a small team consisting of Paul Cuisset (story and programming), Eric Chahi (graphics), Jean Baudlot (music) and Marc Minier / Antoine O’Heix (sound). The Cinematique interpreter, which allows the player to select from a verb menu by right clicking on items, was created by Cuisset. None of these guys had created an adventure game prior to Future Wars, but to give you an idea how talented they were, Chahi would go on to create Out of This World almost entirely on his own just a few months later!

Out of This World: So awesome it's ridiculous!

I’ve avoided reading too much about the plot of the game, but the following blurb probably tells me all I need to know. “What an unlikely hero! You are a window cleaner. A common, little window cleaner. Yet you discover, more due to your notorious curiosity than by mistake, a time machine in your chiefs back office. Strange? Absolutely. Your adventure in the past and the future is about to begin. The quest? Four words: Evil aliens. Beautiful girl.” Future Wars was supposed to be the first of a series of games involving time travel, but the others were never made. As mentioned earlier, I’ve downloaded a copy of the game, since I can’t find one that’s commercially available. I’ve also downloaded a manual (for the Amiga but I don’t suppose it differs) and a quick reference card from Replacement Docs. The manual is quite cool, with some really neat illustrations throughout. I've also found the copy protection image that originally came with the manual, but isn't on mine for some reason. The game displays an image in black and white and asks the player to name what colour certain sections are in (this was obviously to stop people photocopying it). I'll finish this post by informing anyone that wants to play along of a little technical issue I faced when trying to start the game. I noticed the graphics in both the intro and the game proper were flashing badly, and sprites were appearing in front of objects they shouldn't. Some Googling revealed that I needed to run the Install file and set the graphics adaptor to MCGA before running the main application file. Everything looks fine now, so there should be no excuse for any of you not travel through time with me! 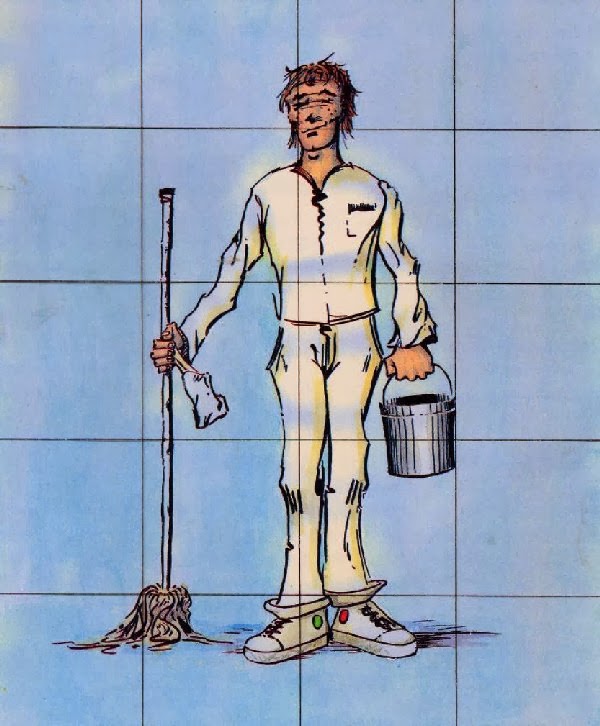 This is me. Seem familiar don't I!

Note Regarding Spoilers and Companion Assist Points: There's a set of rules regarding spoilers and companion assist points. Please read it here before making any comments that could be considered a spoiler in any way. The short of it is that no CAPs will be given for hints or spoilers given in advance of me requiring one. As this is an introduction post, it's an opportunity for readers to bet 10 CAPs (only if they already have them) that I won't be able to solve a puzzle without putting in an official Request for Assistance (see below for an example bet). If you get it right I will reward you with 50 CAPs in return. It's also your chance to predict what the final rating will be for the game. Voters can predict whatever score they want, regardless of whether someone else has already chosen it. All correct (or nearest) votes will go into a draw.

Extra Note: Once again, Lars-Erik will gift the next readily available game on the list to the reader that correctly predicts what score I will give this game. So, if you predict the right score (or are closest), you will get 10 CAPs and a copy of the King's Quest Collection from Steam (which includes Roberta Williams' King's Quest I: Quest for the Crown). How good is that!? Good luck!
﻿
Posted by The Trickster at 22:12