Before I talk about the last parts of The Kristal, I'm going to talk about the part I glossed over, the stage play. At least, what allegedly exists of the stage play. All I know for certain is what Mike Sutin has said about it. I cannot confirm that what he has said is true or not, because as far as I know, no one named Mike Sutin has ever done anything in the world of theater. Nor has his co-author, Rodney Wyatt, ever done anything either. I do know that Wyatt is American though. I know nothing of theater or searching for topics relating to the theater and Sutin claims to be a stage manager, which isn't something that seems to be mentioned in American productions, let alone the kind Sutin was working on.

The play, under the title The Kristal of Konos was originally a comedy musical, which I jokingly guessed correctly. Sutin thought up this play while touring with the original productions of Hair and Jesus Christ Superstar in Spain, 1975/76. Sutin, who was a stage manager and did backdrops for Pink Floyd. It was never produced, nor did any of the soundtrack ever get released. Which, according to Sutin in two different articles, either was the full soundtrack containing Elaine Page [sic] and the entire cast of Hair, or some with Elaine Page [sic] and the cast and musicians of Jesus Christ Superstar.

Two members of the team are famous in their work outside of game design, namely, the astronomer Patrick Moore who narrated the opening movie; And artist David A. Hardy, credited without his initial doing the backgrounds.

I do not lean towards it being true, but it's weird enough to lie about that at least some parts are based in truth. TV or movies it would make sense to lie about, but theatre? Nobody in video games cares about theatre. Sutin was probably a stage manager and the play probably exists. There is no recording, and if it is, it's in Spanish, with the Spanish cast of Jesus Christ Superstar and it sounds like this. I'm pretty sure musicals don't really tour like musicians do, especially in 1976. And there is no chance Elaine Paige is on it, because she was nobody in 1976 and she was also doing some play called The Boyfriend.

By TorchWith a few exceptions games based on movies haven’t historically been known for their quality. Sometimes they are practically considered merchandise and are hastily slapped together to capitalize on the release of the associated movie. This game, with the snappy title An American Tail: The Computer Adventures of Fievel and His Friends, was released in 1993, 7 years after the first movie it’s based on (An American tail, 1986) and 2 years after the second one (An American tail II: Fievel goes west, 1991). In other words, it doesn’t seem like the game developers were aiming for a release that coincided with any of the movies. If they were, they certainly missed their mark, by quite a margin.
Read more »
Posted by Ilmari Jauhiainen at 00:00 12 comments:

Email ThisBlogThis!Share to TwitterShare to FacebookShare to Pinterest
Labels: 1993, An American Tail - The computer adventures of Fievel, Final Rating, Torch 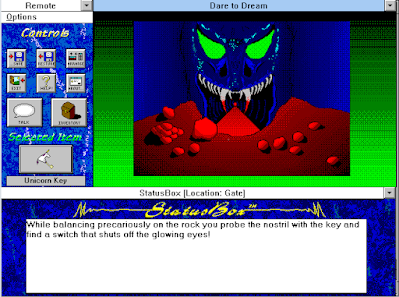 This is where I unfairly left you hanging last time:

“I find “my” rock lying here and am very pleased to see it. Also, I can investigate the statue’s left nostril. That is kind of neat as I was primed to look hard at things’ nostrils when I needed to pull the snot from the tree’s nose. Whatever I try to do, my hand cannot fit inside the tiny hole. Maybe it’s time to pop another pill! But let’s save the game first, shall we?”

And this is how it worked out:

While that wasn’t necessary (I can’t enter the nostril and am kind of thankful for that) I find out that I can’t enter the statue’s mouth either. Its glowing eyes mesmerize me whenever I get too close. I quickly realise what I did wrong: I need to insert the unicorn key in the nostril. It is really obvious, to be honest. That shuts off the glowing eyes and I can finally enter the NiteMare. I’m treated to a short ending sequence and that’s that: 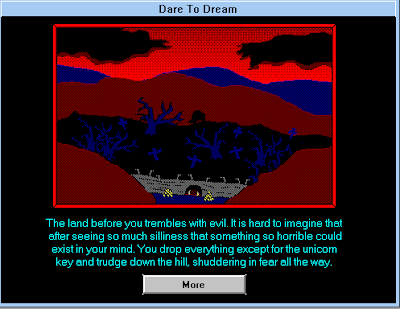 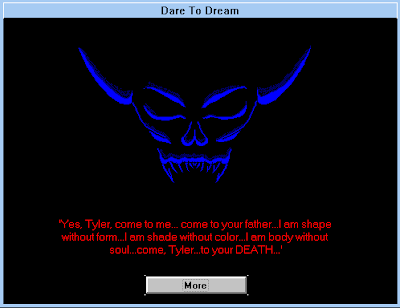 Let’s move on to the third and final part then, shall we?
Read more »
Posted by Ilmari Jauhiainen at 00:00 3 comments: