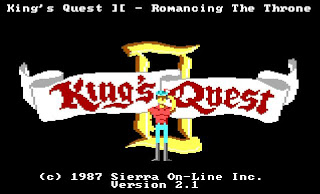 It looks like our King Graham has been working out between games.

After ripping my way through King’s Quest I, it’s now time to move onto the next game on the list, King’s Quest II: Romancing the Throne. This is another game that I’ve played through previously, but again that was a long, long time ago. Unlike the first game, I can’t recall ever playing King’s Quest II a second time, so perhaps I’ll find it a little more challenging. Developed way back in 1985, it wasn’t particularly surprising to find Sierra quickly pumping out a sequel after the success of the first game in the King’s Quest series. Roberta Williams decided she wouldn’t try to push the technology too far with the sequel, particularly as disk space and memory restrictions couldn’t cope with any dramatic improvements. The graphics and animations would be created the same way and the text parser would also use the same technology as were used first time round. She did feel however that there was one area in particular that she could build on while staying within the restrictions of the time, and that’s the story. 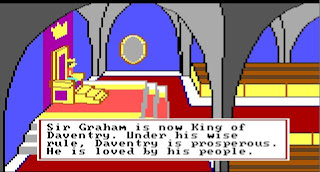 Of course he's loved by his people! He's got a chest that never runs out of gold!

The story of King’s Quest 1 was a rather simplistic affair. Find three magical items for the King and be rewarded with the kingdom itself. The King of course very conveniently passes away the very moment the player returns with the items, leaving Graham seated on the throne as King of Daventry at the conclusion of the game. King’s Quest II picks up one year later. The year that has past was one of great prosperity for Daventry, ruled by a King who possessed a bottomless chest, an invincible shield and a mirror that tells the future. When looking in the mirror one day, Graham is shocked to see former King Edward, who warns him that Daventry will soon become weak if he fails to find an heir. The Prime Minister of Daventry, Gerwain, suggests to Graham that he hold a celebration where women from all over the land can come and try to win his favour. Unfortunately, while Graham does take Gerwain’s advice, he doesn’t manage to find his perfect match. Amusingly, his reasons for rejecting them are fairly finicky, such as “one maid squinted, another tripped over everything in sight”. 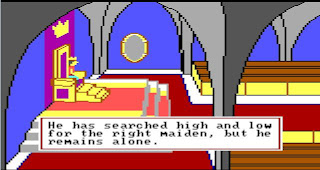 I feel for the guy. He has everything, but no woman reaches the level of awesomeness he demands!

While standing in front of the magic mirror, Graham wonders aloud why he can’t find a woman that touches his heart and his dreams, despite there being hundreds of lovely maidens in the kingdom. The mirror immediately displays the most beautiful woman Graham had ever seen, and yet she looks sad, with a tear rolling down her face. The mirror tells him that this woman is Valanice and that she has been imprisoned in a tower by a witch called Hagatha and which is guarded by a ferocious beast in a land called Kolyma. To rescue her, he must venture forth and find three keys which unlock the doors to Kolyma. So…it should be pretty clear by now that Roberta spent a little bit more time on the story this time round, but that merely makes it longer rather than more intelligent or less cliché than the first. It will be interesting to see whether the in-game dialogue is improved upon, or whether the characters that pop up throughout have more personality than they did in the previous effort. I really can’t remember. 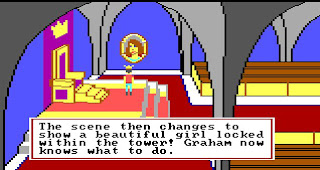 It really was hard to make chicks look hot in EGA.

King’s Quest II was the game that kick started the tradition of using the series as a training ground for future designers. Scott Murphy (game logic) and Mark Crowe (graphics) were amongst the developers of the game, and would go on to create their own successful series, Space Quest, a year later. Al Lowe (music) is another recognisable name, who would eventually be the man behind yet another classic Sierra adventure series, Leisure Suit Larry. Before I crank up DOSbox and return to Daventry, I should mention that I’m once again playing the re-released and slightly improved 1987 version of the game, which is the one most people have played in the various collections over the years. Sierra initially intended to remake the game in 1990, just as they did for part one the same year, but the poor sales of all the remakes that released convinced them not to go ahead with the plan (there is a fan made one out there however). Enough talk, I’ve got an imprisoned maiden to save! 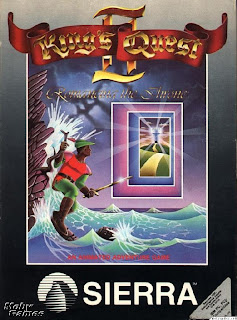