Gwydion Journal Entry 1: "That’s it! I’ve had it with this evil wizard Mannannanan...Manannaaana...oh I can never spell his name! I feel like I’m destined for greater things than being an errand boy for an unappreciative bastard. I completed all of my chores today so as not to gain his suspicion, and as soon as he went on one of his “journeys”, I started snooping around this joint to see what I could find. I’m pretty sure he’d come after me if I just walked off into Llewdor, so I need to find some way to make sure you-know-who can’t ever find me again. During the twenty minutes he was away, I’ve managed to find all sorts items, most of which seem completely useless. At least they did before I discovered the wizard’s laboratory, including a book of spells that happen to require pretty much everything I’ve picked up. I found even more of the necessary items on my first brave venture outside and I have to say, this magic map will certainly come in handy when travelling around. Anyway, he’ll be back any second, so I better go hide all this stuff under my bed..."

After an hour and a half of playing King’s Quest III, I’ve pretty much completed the therapeutic treasure hunting that kicks off all the classic Sierra adventure games. I’ve got around 70 points out of 210 in the process, and have collected almost all the ingredients needed to cast the numerous spells found in the manual. If this rundown makes it sound like I’m breezing through the game due to my past experience with it, well I guess that’s certainly true. It has however become very clear to me that this initial part of the game would be pretty darn challenging for first time players, as it would have been for me all those years ago. There were a couple of items that I had a lot of trouble locating, even though I was pretty sure I knew exactly where they were, in particular the magic map and the key to Manannan’s cabinet. 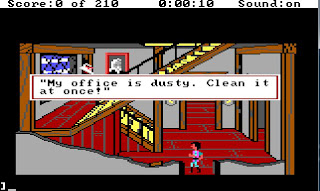 I'm feeling quite good actually, thanks for asking!

(I try not to give too many direct spoilers in this blog, but to explain the issue here I really need to go into detail. Skip this paragraph and the next if you plan on playing the game some time.) Both of these items are found in Manannan’s bedroom, but the text parser makes finding them more challenging than it might have been. “Open the closet” and type “look in closet” and you get the response “You see voluminous velvet robes, satin slippers, peaked hats, and soft linen gowns.” Trying to retrieve any of these items results in “It’s of no use”, which it’s safe to say would send many an adventurer off looking elsewhere for required items. The solution is to “move the robes” which reveals the magic map, but given this item is not required to complete the game, I guess the developers can be forgiven for the difficulty here. 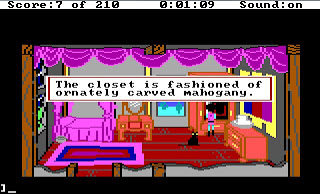 Right, well I guess there's absolutely nothing on the closet.

The brass key is a different matter however, as the game simply can’t be finished without it. I was pretty certain the key was on the top of the closet, but every time I entered “look on closet” I was met with “The closet is fashioned of ornately carved mahogany” and nothing more. Understandably I began to doubt myself and after trying various different ways to locate the key on the closet, I gave up and spent around twenty minutes scouring every other part of the house trying to find it. When that failed I went back to the bedroom and typed the command again, only to get the response “The closet is fashioned of ornately carved mahogany. There may be something metallic on its top.” It turns out you have to be standing a fair distance away from the closet when you type “look on closet”, otherwise you won’t see anything. That’s just not cool and I have to wonder how many players have simply failed to find the key, particularly given I had so much trouble despite knowing exactly where it was. 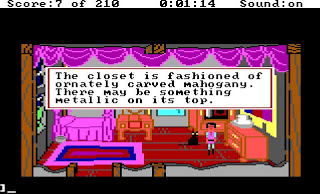 Since when did physics become so important in King's Quest?!

Anyway, after complaining about the harsh time limit that made Déjà Vu more challenging than it should have been, I’ve moved straight onto another adventure game where time plays a role. Thankfully it’s not so much a time limit this time around (although I assume you do actually need to get rid of Manannan before running out of food to give him when he’s hungry) and acts more as a timekeeper to help you keep track of how much time you have to cause mischief while Manannan is away or sleeping. If he catches you being away from the house or with any spell related items on your person he will kill you immediately, so the timer tells you when you need to get back to the house and hide your items. Of course, you’re never informed of exactly how long you have, so trial and error is the only way to figure things out. It gives King’s Quest III a unique component and after the initial confusion that it causes, works pretty well. 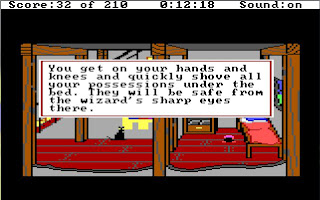 Let's hope that bloody cat doesn't have a way of communicating.

Otherwise it’s business as usual! The game looks and feels just like the first two, has the same positives (addictive mystery, charming fantasy setting and humorous trimmings) and negatives (climbing stairs is still a nightmare and I can’t believe that once again you have to go in and out of a particular house continuously until the occupant is either not there or asleep to progress), and as expected I’m enjoying it despite all the flaws. There’s just something so compelling and light-hearted about the King’s Quest series that makes you want to forgive it for all the pain it causes you. Well, I’m ready to head down into Manannan’s laboratory and start casting spells. I can’t really remember exactly where I’m supposed to use them all or what happens at the end of the game, but I assume I should be able to get there within another hour or two. I’ll meet you back at Daventry! If I’m not there tomorrow, just wait longer! 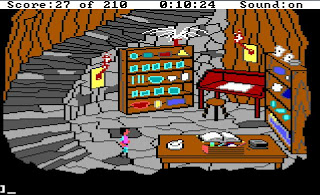 Many hours of my youth were wasted in this lab, trying to cast spells without the manual.
Posted by The Trickster at 22:53

Email ThisBlogThis!Share to TwitterShare to FacebookShare to Pinterest
Labels: 1986, King's Quest III: To Heir is Human