Welcome back! It’s been a few weeks, but last time we saw Roger Wilco, he had just defeated (recruited?) an android intent on his destruction. With a stressful situation firmly in the rear-view mirror, Roger and his crew decided that they needed a little post-mission rest and relaxation at the Space Bar. If anything, last time’s post reinforced the Star Trek pastiche as we played through our first “away mission” on a surprisingly Earth-like planet. As you can guess from the title this week, we’re not going to escape the Star Trek references any time soon.

The Trouble with Space Monkeys

Captain’s Log, Stardate: Thursday and it’s a 5 o’clock world when that whistle blows; no one gets a piece of my time. My crew and I are beaming down to the Space Bar for some well-deserved shore leave after our recent exploits on Kiz Urazgubi. I am certain that no death and destruction awaits us because shore leave episodes are peaceful ones. If I get chased by any giant bunnies that are “late”, I will be certain to shoot first and ask questions later. With luck, we’ll get the “oversexed natives with a secret” sort of shore leave and I won’t mind if we never discover their secret...

I see several problems with this. Firstly, while I can believe this agreement can withstand modern times, I'm not clear on how a bunch of slaves were able to keep hold of an island during Roman times, or the Dark Ages. They were galley slaves, you want to tell me that all the Edmunds that were kings in those times were okay with that? Could have just written that I won a contest, dude. I'm American, for one, I'm not going over to jolly old England without being told why without a paid-for ticket. Secondly, I am not an orphan descended from orphans, why do I specifically get this island? Thirdly, what if I don't browse the personal ads?
Read more »
Posted by TBD at 14:11 12 comments:

Missed Classic: The Palace of Deceit: The Dragon’s Plight – WON! and Final Rating 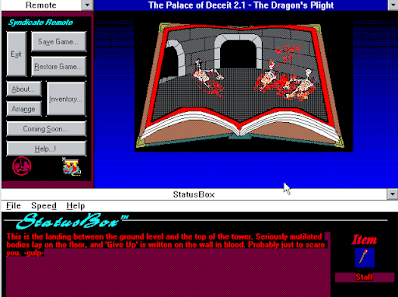 To my enormous relief, the second Palace of Deceit game turned out to be winnable. It took a lot of pixel hunting to get there but finally we were able to save the day. A short recap is probably in order: We play a blue dragon called Nightshade who was imprisoned by the evil wizard Garth who hates dragons and wants to kill all of them. Why we are still alive, I don’t know, and game logic is not strong with this one but it was still a rewarding experience.
Read more »
Posted by Ilmari Jauhiainen at 22:00 8 comments:

Email ThisBlogThis!Share to TwitterShare to FacebookShare to Pinterest
Labels: 1992, Final Rating, Missed Classic, The Palace of Deceit: The Dragon’s Plight, Will Moczarski

Previously, I had almost solved my problems, but was forced to restart the game thanks to an admittedly generous time limit. I do believe it's linked to your actual actions as opposed to in-game time, given the game's speed issues, is a pretty good bit of foresight, all things considered. I mean, someone with foresight would also not force the player through duct work or a crappy action sequence...but I get ahead of myself.

So, the key, this opens a room with another jewel. It's some stupid name, but it's the jewel that opens the scanner. So this means I can take the final jewel, the one I really need. It occurs to me this is just key busywork, but with another name. Upon using the jewel, the door opens really slowly. As can be expected.

...and I've found the jewel...and no money. I can take it, but the alarm is tripped. I have no empty soda can to change it with. The only thing I can think of that I'm missing is the guard in the bathroom. Leaving my squad somewhere safe, I return to the bathroom. Nothing. I go back to the furnace, crank it up, and return. Nothing. Maybe he's doing a number 2? I try opening the door. It works. I wasn't expecting that.

Aha, the scuba gear. That means the scuba section. I was wondering when that would happen. What wonders await?