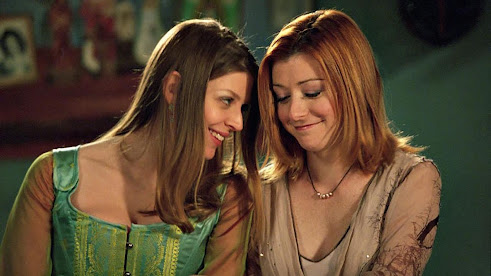 I intended to wrap up Moonmist this week by closing out on the three remaining cases then moving quickly to the final rating. I did not make it. When playing and reviewing, I try to come to these games as unspoiled as I can. I learn what I need to discuss the history and place the game in context, but I avoid spoiling the plots and puzzles as much as I can. Usually that works, but in this case I missed one of the things that Moonmist is most remembered for: it is (supposedly) the first computer game to feature LGBT characters. I disagree with that assessment, but we’ll get there soon enough. It seems poor form for me to review this game, in Pride Month of all times, without giving space to discuss this important aspect of gaming history.

This week, I’m looking at the “blue” variant of Moonmist, the second one listed in the manual. (I finished “red” last week.) To the best of my knowledge, this is the only version that includes a LGBT-related plotline, but I have not played the others yet. I will take a quick look at LGBT representation in media more broadly into the 1980s and then dive into whether or not this game deserves its spot as the “first”. Of course, I’ll also be playing and solving the mystery itself! I hope that the final two variations don’t have more surprises that lead to hours of research and introspection. Read on for more. 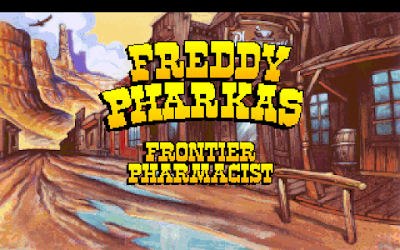 Hello there, dear The Adventure Gamer family. I am back after a long absence to review another game, and another Al Lowe game, but this time it’s not an entry in the Leisure Suit Larry series. No, I’m leaving my polyester pal behind and traveling to the old west to play Freddy Pharkas: Frontier Pharmacist, Mr. Lowe and co.’s 1993 outing in the Sierra adventure game library. There was a CD-ROM version (more on this later), with voices and everything, released in 1994, but I’m playing the DOS version, mainly because I’m not a huge fan of CD-ROM games.

1993 is smack in the middle of the golden age of Sierra adventure games, which I contend lasted until 1996. You might disagree with me, and I’m sure will let me know in the comments below, but that’s what makes life interesting, right? And we all need a little adventure, uncertainty, and chaos in our lives right about now.
Read more »
Posted by Ilmari Jauhiainen at 23:00 47 comments:

Almost four years ago, I covered the original Ecoquest here on the blog, and now we've arrived at the sequel: Lost Secret of the Rainforest. Instead of diving deep below the sea, this time we'll be exploring the rainforest. You may remember that Ecoquest had a bit of an agenda to introduce kids to concepts of conservation of nature and show them ways that human activity can harm the ocean environment. The rainforest is also a place with unique natural resources that can easily disappear if people mismanage them, so it makes sense as the subject of a sequel along the same lines. We'll keep an eye on how the game handles its message while we play through the story.
Read more »
Posted by Ilmari Jauhiainen at 23:00 21 comments:

Missed Classic: Moonmist - Getting a Clue (Won! Once!) 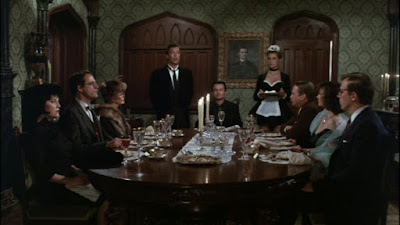 Welcome back to Moonmist, the Nancy Drew mystery with a bit less Nancy Drew and a bit more Clue. The more I think about it, the more likely it seems that Galley and Lawrence were inspired by the 1985 film starring Tim Curry and based on the board game. (Our international readers may know both by their foreign titles, Cluedo.) Both the game and the film relish in mystery tropes including the all-important “dinner scene”, but the genius of the Clue film comes in its multiple endings. When you went to the theater, you were randomly selected to get one of several possible endings with different murderers and motives. The whole film had to be set up to support the multiple endings and, for my money, it is one of the great comedic twists in film. Moonmist’s multiple endings, plucked from a seemingly-random question of color at the beginning of the game, might not really be based on Clue but I cannot help but think there is a connection. Later releases of Clue included all of the endings, one after the other, at the conclusion of the film. We will return to Moonmist after we beat it once to see how the other threads play out.

We left off last week just after the critical dinner scene. The pre-recorded voice of the late Lord Lionel Tresyllian invited the assembled guests to participate in a scavenger hunt for a missing piece of his fortune. Lord Jack, Lionel’s nephew and the new owner of the castle, is a prime suspect in his uncle’s death due to his inheriting the estate. His ex-girlfriend, Deirdre, also recently died in mysterious circumstances. (She fell down a well!) Meanwhile, our friend Tamara believes that someone is trying to kill her and the mysterious “White Lady” ghost has resumed haunting the halls. How are all of these details connected? We just have to solve the mystery to find out.
Read more »
Posted by Ilmari Jauhiainen at 23:00 6 comments: 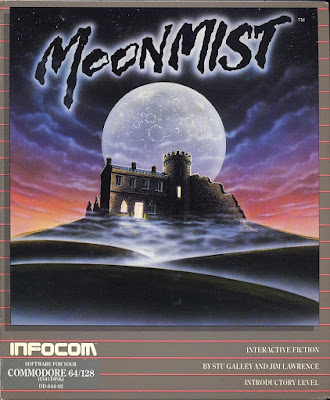 As we close on Infocom’s final release of 1986, we turn the page on a new era. As best as I have been able to determine, Moonmist is the final game that was deep under development prior to the purchase by Activision, or at least the last game to not have their fingerprints. Released only a month after Leather Goddesses of Phobos, it took the coveted holiday gift slot which was generally (but not exclusively) the home of the yearly Zork games. 1987 would bring changes, not the least of which will be a rapidly sped-up development process to allow Infocom/Activision to bring eight games to market in twelve months. We’ll take a look in future posts as to how successful those games will be. The industry was changing and Infocom would work hard over the next three years to keep up with it while maintaining their unique games and identity.

Moonmist is also the final game released by the pairing of Stu Galley and Jim Lawrence, and the final game from either of them overall. Galley had been a long-time champion of Interactive Fiction at Infocom, but he was better at refining others’ concepts than launching his own. Ironically, this was also precisely Jim Lawrence’s oeuvre as well. Mr. Lawrence had made his career writing stories based on others’ characters from Hardy Boys to Tom Swift, Nancy Drew to the Bobbsey Twins. He was undoubtedly great at it-- the handful of his books that I read prior to playing these games were not bad at all-- but they were not his characters. So it is perhaps no surprise that in his first outing he created a clone of Tom Swift and here, in his second one, a clone of Nancy Drew. I do not mean that disparagingly, but I cannot help but to think in retrospect that they were not playing to each others’ strengths.

Mr. Galley produced one of Infocom’s greatest mystery games in The Witness, and this game (despite its “introductory” designation), was written and classified as a sequel to the turn-based mysteries that Infocom pioneered. I have nothing but excitement for a game that swaps the police procedural aspects of the Deadline series and replaces it with a plucky young investigator. I also absolutely love that this is the second game in a row where you can choose your gender; it’s a small thing, but a sign that Infocom was expanding their markets and their minds. Whether because of how great it is or something else, Moonmist was also selected as one of the few games to be updated with graphics and translated to Japanese. That bodes well for this game being a lost classic.

I love a good mystery!
Read more »
Posted by Ilmari Jauhiainen at 23:00 9 comments: 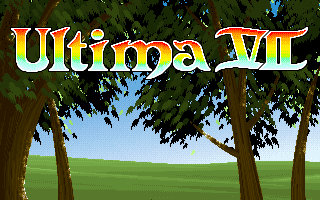 We talk often about what makes something an "Adventure Game", much like any genre this one was very loosely codified but I'm sure most of us would know one when they see one. Certainly we have already covered games that stray in some ways from accepted adventure gaming norms, most notably the Quest for Glory series which uses the classic Sierra graphical adventure gaming engine to deliver a fantastic RPG series.

The Ultima series was one of the earliest commercial RPG series, and one of the most popular through the 1980s and 90s. As Origin Systems developed this and other series, they were always wanting to be at the forefront of new technology and game design. The increased graphical fidelity of the Ultima series allowed them to increase the amount of unique characters, items, interactive elements and mechanics. The peak for this was surely Ultima 7, in which you can bake bread from flour and water, weave cloth from wool, and in the expansion pack even craft your own sword. 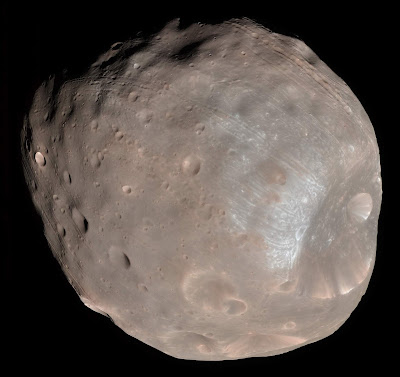 My six-year old has recently become very interested in space. In the way that six-year olds can pick odd topics to be obsessed with (er… that apple didn’t fall far from the tree), he’s talked so much about Phobos and Deimos lately that I could probably lecture a course on it. Phobos is the larger of Mars’s two moons with a diameter only of around 14 miles. Gravity on Phobos is incredibly weak and a human could take a flying leap of nearly a half mile without difficulty, although with that comes a low escape velocity. Athletic individuals could potentially jump into space! There’s also a good chance that Phobos could break apart in a few hundred years to give Mars a tiny ring of its own. I have learned so much! And yet, my son has never once mentioned the legendary Leather Goddesses of Phobos. This is probably for the best given that he is just six, but still a disappointment. I have half a mind to start a petition to name one of the many Phobos craters after Steve Meretzky, but I doubt that would go very far.