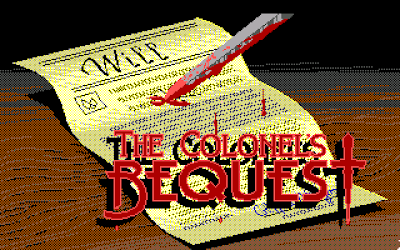 That's two titles in a row that are dripping with blood

I’ve been looking forward to The Colonel’s Bequest since I started this blog. It’s one of those games that I’ve always known about and generally heard good things about, but just never got around to playing. Yet another Sierra game, The Colonel’s Bequest was released in October 1989, and was written by the legendary Roberta Williams (designer of the King’s Quest series and mother of the adventure genre we know and love). Interestingly, The Colonel’s Bequest takes as much from Roberta’s first gaming effort, 1980’s Mystery House, as it does from her better known successes. In that game the player explored a large Victorian mansion, looking for clues that might reveal who out of the seven inhabitants committed murder. The little I know of The Colonel Bequest suggests it has a very similar plot, and it’s clear that both games were heavily influenced by the works of Agatha Christie. For anyone unaware of Christie, she wrote 66 detective novels, with famous characters like Hercule Poirot and Miss Jane Marple solving mysteries throughout. 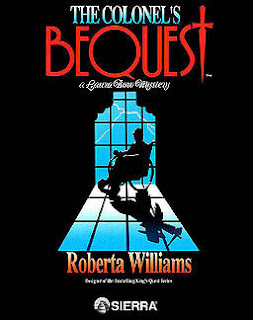 I like this cover. It's striking without being completely obvious.

The Colonel’s Bequest is the first of two Laura Bow games, with 1992’s The Dagger of Amon Ra being the sequel. The character was modelled after Clara Bow, a well-known actress from the 1920’s, which makes sense given that The Colonel’s Bequest is set in 1925. It was the fourth of five adventure games released in 1989 utilising the SCI0 engine, with the order being Space Quest III, Hero’s Quest, Leisure Suit Larry 3, The Colonel’s Bequest and finally Codename: ICEMAN. This means the game utilises 320x200 graphics and 16 colours. It’s important to note that while all the game’s story and dialogue was written by Roberta, there were many other important people involved in its creation. Most interestingly, a woman named Jacqueline Austin was brought in as a Creative Designer. From what I can tell, The Colonel’s Bequest is the only game that Jacqueline got involved in, and she’s spent more time writing screenplays and novels. I can’t be certain what her involvement was, but the title suggests she played a role in the game’s distinctive style and structure.

Programming was handled by the very experienced Chris Hoyt (Police Quest 2 and King’s Quest IV) and Chris Iden (one of the creators of the AGI system). Graphics were produced by veteran Gerald Moore (Police Quest, King’s Quest IV, Hero’s Quest) and Douglas Herring (Larry 2), with the latter also handling all the animation. The Colonel’s Bequest also marked the very first game that Ken Allen worked on, who would go on to create sound and music for dozens of games (including Les Manley: Lost in LA, Conquests of the Longbow and our good friend Corey Cole’s Castle of Dr. Brain). The whole project was directed by Roberta and Chris Iden, which gives me faith that this will be a pretty professional and entertaining game. The game isn’t available for sale these days, so I’ve downloaded a copy of the original 1989 version (there was a slightly improved version included in a pack along with the sequel in 1993) and will run it in DOSBox. I’ve also downloaded the manual, a map and a copy protection sheet that is required to play to game. 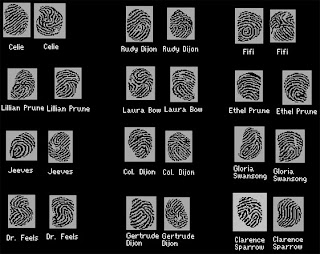 Speaking of copy protection, the system used by The Colonel’s Bequest was actually pretty unique. It originally came with a red-lined foldout that contained fingerprints of all the characters in the game. The player had to use a “red-gel magnifying glass” to match the fingerprint on the screen with one on the foldout, and then select that character to proceed. The copy I have doesn’t require the magnifying glass, so I shouldn’t have an issue (if indeed I do need to use it). The manual is one of the nicer ones I’ve come across so far, and includes a fairly detailed description of each of the characters I will interact with in the mansion along with a six scene run through of what I assume will be covered in the game’s introduction. Finally there’s the map, which is a top down view of the entire island, with each location well represented and clearly marked. The impressive documentation has me even more excited about getting stuck into The Colonel’s Bequest. I hope I can adjust from space-faring antihero to 1920s amateur detective before I miss too many clues! 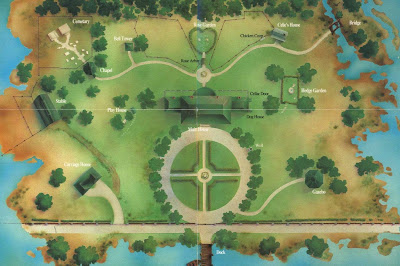 It will be nice knowing the boundary limitations of the environment going in for once
Note Regarding Spoilers and Companion Assist Points: There's a set of rules regarding spoilers and companion assist points. Please read it here before making any comments that could be considered a spoiler in any way. The short of it is that no CAPs will be given for hints or spoilers given in advance of me requiring one. As this is an introduction post, it's an opportunity for readers to bet 10 CAPs (only if they already have them) that I won't be able to solve a puzzle unassisted (see below for an example). If you get it right I will reward you with 130 CAPs in return (it's going to keep going up until someone beats me)! It's also your chance to predict what the final rating will be for the game. Voters can predict whatever score they want, regardless of whether someone else has already chosen it. All correct (or nearest) votes will go into a draw.

Extra Note: Once again, Lars-Erik will gift the next readily available game on the list to the reader that correctly predicts what score I will give this game. So, if you predict the right score (or are closest), you will get 10 CAPs and a copy of Loom from Steam! How awesome is that!? Good luck!
Posted by The Trickster at 16:38

Email ThisBlogThis!Share to TwitterShare to FacebookShare to Pinterest
Labels: 1989, Introduction, The Colonel's Bequest, The Trickster