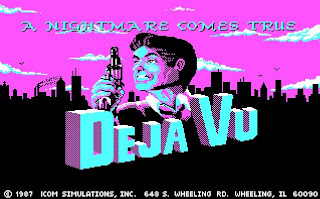 I haven't even started playing yet, but the nightmare has well and truly begun.

After rapidly playing through two games that I’d completed previously, I’m very excited to tackle something challenging. Game 4 on the list is one I’ve never played, and in fact knew very little about until today. It’s full title is Déjà Vu: A Nightmare Comes True!!, and it was developed by a company called ICOM in 1985.  ICOM  Simulations was founded in 1983 in Wheeling, Illinois, and is best known for their MacVenture series of adventure games, of which Déjà Vu is the first. As the MacVenture title suggests, the series was created initially for Macintosh computers, before being ported to numerous other platforms later. The games are the first to be considered “point and click” adventures, which is no small achievement, especially given how successful other games of the subgenre (by companies such as LucasArts) would be in the years following. There were four MacVenture games in total, being Déjà Vu (1985), Uninvited (1986), Shadowgate (1987) and Déjà Vu II: Lost in Las Vegas (1988). 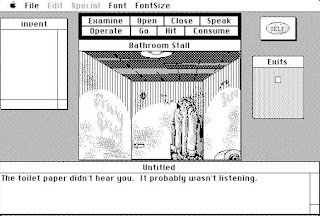 The original Macintosh version of the game

﻿There are actually two versions of Déjà Vu released for PC. The first one was developed for DOS in 1987, while the second was developed for Windows 3.1 in 1991. The screenshots I’ve seen leave no doubt that the 1991 version is far prettier to look at, but since this blog follows the development of adventure games chronologically, it makes much more sense for me to play to DOS version. Unfortunately, from what I can see, the one I’ll be playing looks to be the ugliest of all the ports, but you get that. I’ve also read that the new graphics produced for the 1991 version don’t always adhere to the matching text descriptions (which were left unchanged), resulting in some confusion for players. Just as with Below the Root, I found Déjà Vu very quickly by Googling “déjà vu dosbox download”. I’ve also found the manual in text form here, although it’s clearly meant for the original Macintosh version. 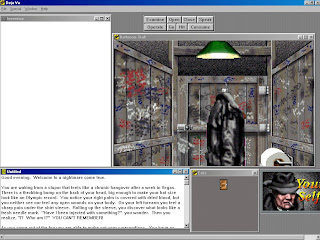 The much prettier Windows 3.1 version which I will unfortunately not be playing.

﻿Before I begin writing any posts for a game, I obviously want to make sure I’m going to be able to successfully play it. I’d had so little trouble running the first three games on the list that it actually came as a surprise when I ran into problems testing Déjà Vu. I’ve been using the latest version of DOSBox, which is version 0.74, up until now. I start games in it by dragging the game executable and dropping it on the DOSBox shortcut on my desktop, and this has worked fine for the likes of Below the Root. I started Déjà Vu using the same technique and everything looked great. I could even play the game successfully for a while, but ran into trouble the moment I tried to save my progress. Clicking Save brought up a screen asking me whether I wanted to save to the A: drive, or a different path, but whatever I clicked the game would simply lock up. After Googling the issue, I came across others having the same problem, and then discovered that the game only works in DOSBox 0.60. 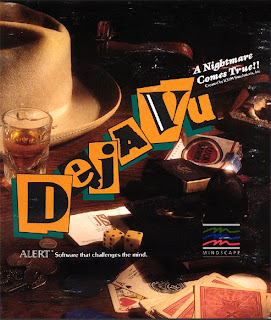 So, I downloaded DOSBox 0.60, started the game and tried to save. If I tried to save the game to the A: drive, I’d get a Stack Overflow error, so I tried to change the path to the E: drive (my memory stick that contains the game files), only for the game to freeze up again. It was then that I read on a website that the game files need to be stored on the C drive for the game to work properly. I moved the Déjà Vu folder to the C drive, started up the game again, and this time I was able to save my game successfully. Unfortunately, as soon as I tried to restore, I received a message that there were no files available to restore. I could see my save file in the Déjà Vu game folder, but the game wouldn’t recognise it. After an hour of messing around and trying to run the game various different ways, I saved my game with the name “crap” and found I could restore it. A little while later I figured out that the restore process is only looking at the first file in the game folder. If that file happens to be a save file then it’s available to restore (a throwback to dedicated save game floppy disks I guess). Since my save files are appearing in the game folder, anything beginning alphabetically after DEJAGAME.D simply wasn’t being picked up. So, the game works fine once you know to use DOSBox 0.60, have the game folder on the C drive, and save your games beginning with A, B or C. I’m ready to go now! 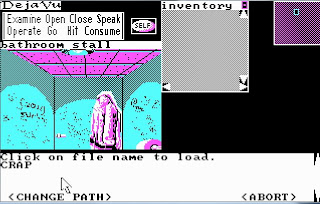 Never have I been so happy to see crap!
Posted by The Trickster at 08:21