You’ve probably gathered by now that Déjà Vu is unlikely to head the leader board after getting the PISSED treatment. That’s not to say that I didn’t enjoy the game at all, only that technical aspects get in the way of what was otherwise an entertaining and absorbing experience. Let’s see how much these negatives affect the final rating.

Puzzles and Solvability
This is actually a difficult aspect of Déjà Vu to rate. On the one hand, the puzzles are really quite logical and the use of well known detective techniques often does the trick. For example, finding a notepad and rubbing pencil across it to see what was written on the last sheet removed, or shooting the lock on a cabinet when no key is available. Most of the game revolves around following one clue to the next one, trying to find a cure to your condition while gradually piecing together the story while you’re at it. Unfortunately, as logical and enjoyable as the puzzles might be, the unnecessarily ruthless time limit, the clunky interface and the poor graphics hinder your progress, making what might be fairly straightforward tasks rather difficult. Since most of those elements have their own rating in the PISSED system, I won’t be too harsh on this one. I’m going with 5. 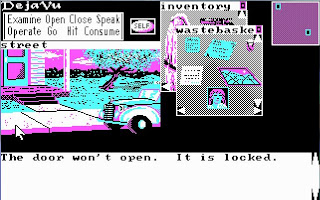 Interface and Inventory
There’s absolutely no doubt that Déjà Vu was groundbreaking in its use of both interface and inventory, but any praise it should get for its achievements is negated by just how clunky it is. I'll start with inventory. Being able to drag and drop items from the game environment into an inventory was novel, as was the ability to select multiple items at once (coins for example) and “operate” them all at once. However, the limited space within each container, whether it be a basket, a wallet, a jacket, or anything else you pick up along the way, means you have to hold items within items within items, resulting in multiple inventories with no easy way to move objects between them or view everything at once. I found it frustrating early on and the games tendency to give you items that you don’t actually require (you don’t know that of course) makes things get ugly very quickly. 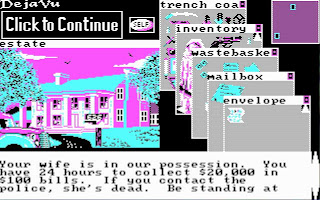 Déjà Vu - For those occasions when one crappy inventory isn't enough!

Déjà Vu was also the first PC graphic adventure game to have a first person viewpoint, after Sierra’s Quest games had to this point used a third person perspective.  Being in first person was ideal for this game, as it allowed all attention to focus on finding items and clues in the otherwise static environment. The point and click control was also pioneering, but as I mentioned in an earlier post, needed quite a bit of work before it would become the norm for the genre at large.  I struggled all the way through the game with the counter intuitive order of having to click the action you wanted prior to the item to want to act upon. I should however take back my criticism around the text parser as it turns out it’s only needed when telling cab drivers addresses or entering combinations into safes and cabinets. Other than these moments, which make total sense, I was never required to type a specific command to someone to gain otherwise unknown information. All up, while the game was unquestionably pioneering in all aspects of this category, I have to give it a 3. 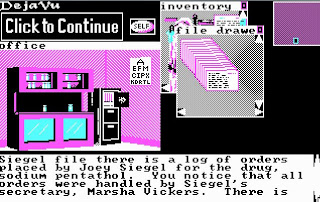 The first person viewpoint means you focus on investigation, which is exactly what is needed.

Story and Setting
The story of Déjà Vu is typical of 1940s based hard-boiled detective novels and movies with amnesia thrown in to add to the intrigue. I admit that I’m not particularly excited by that type of thing, but can appreciate a well told mystery from time to time. There is a decent plot to be found here, but the reasonably non linear way that the story is revealed can lead to serious confusion. That being said, if you consider that the character you’re playing is utterly confused by the situation he finds himself in, having to piece together what the hell is going on for the majority of the game makes total sense. I admit I had to read over all the notes, diaries and invoices I’d collected quite a few times before things started to make any sort of sense, but I was only given the freedom to do that once the time limit was removed three quarters through. It’s a 6 from me. 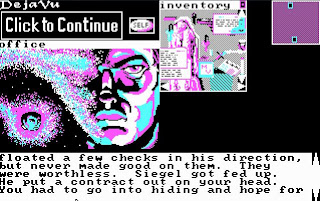 Rather fittingly, I couldn't put all the pieces together until my character got his memory back.

Sound and Graphics
Where to start!? I don’t know whether the sound is not playing correctly through DOSBox or whether it’s just awful, but the majority of the effects sound like a combination of a toilet flushing and speaker feedback. Thankfully there’s not much of it, so I eventually listened to music instead. The graphics fair better, but DOS users got the raw end of the deal quite frankly. Comparing the sickly blues and pinks of the DOS version to the colourful Amiga, NES and C64 versions, it’s clear that the technical limitations of the PC at the time got in the way of the game’s vision. This is a little surprising however, given that the DOS port wasn’t created until 1987, at which point I would have thought things would have moved on from four coloured CGA. I have no choice here other than to give the game a lowly 2 for Sound and Graphics. 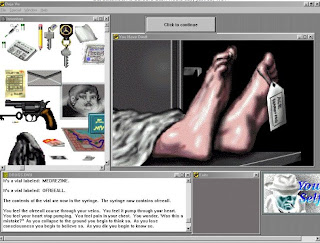 Even death looked attractive in the Windows 3.1 version!

Environment and Atmosphere
1941 Chicago isn’t exactly entirely reproduced for this noir mystery, but at least the environment feels gritty and downright dangerous. From filthy toilet cubicles and sewers right through to grand estates and swanky apartments, it all fits the time and the tale. The language found throughout the game also adds a great deal of atmosphere, with many of the text based clues given that gangster American flair, and I have to admit that the time limit I’ve whinged about certainly gives the whole thing a level of urgency that wouldn’t be there otherwise. If only the graphics and sound could have been more effective, this category would have been given a higher rating. As it is, I’ll have to settle for a 5. 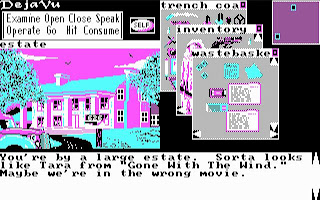 Dialogue and Acting
While we’re still a long way from two-way conversations, not to mention acting, being introduced to adventure games, the genre itself evolved out of interactive fiction where description is everything. Déjà Vu plays very much like interactive fiction, only with a basic graphic interface that allows you to manipulate objects rather than typing in commands. There’s a lot of text to read as can be seen by checking out the screenshots in this blog, and for the most part it’s really very good. I’ve mentioned the graphic descriptions used for the various ways you can die and how they sit on the fence between vulgar and humorous, but the majority of the writing fits the tone, is of professional quality, and uses humour to great effect. This would have the be one of the games strongest points, so I’m giving it a 6. 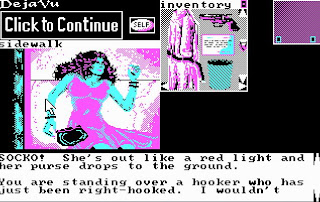 It's hard not to smile at quality lines like this one. 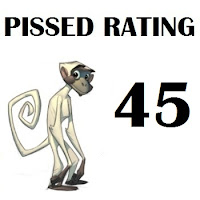 So it's a 45 for Déjà Vu, which is the lowest score so far. That seems fitting to be honest as I definitely enjoyed the other three games more, despite the groundbreaking features. I only hope that there's some improvement in the graphics, sound and interface for the other ICOM adventures, particularly as I'll be playing Uninvited in around five games time. The supernatural theme of that game seems more up my alley, so I still hold some hope of getting something positive out of it.
Posted by The Trickster at 22:01