Simon the Sorcerer - Quest for Whimsy 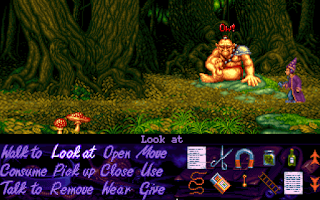 We’re back with our clumsy protagonist in the charming fantasy world of… does it even have a name? Whatever the case, we explored the eastern half of the map last time around and this time I’ll take a scrutinous look at the southern part. First I come across a scantily dressed barbarian who is crying bitterly because he has a thorn stuck in his right foot. I pull it out for him and he is actually very thankful, handing me a whistle I can use whenever I might be in trouble – he will then return the favour. “What a nice guy”, Simon remarks, and rightly so. So far I haven’t been in trouble. I have not even run across a single puzzle. But I’m sure it will come in handy.

Next I find a tree stump, and this jogs some serious memories. When I pass the stump it starts talking to me, pestering me for some spare wood. Turns out I can talk to the woodworm who live inside the stump. I remember that I found this very funny and clever way back when but now...eh. It’s okay, I guess. The main joke is that Simon thinks that he’s talking to a tree stump while he is actually talking to the woodworm and they subsequently make fun of him because he thought he was talking to a tree stump. Ah, you had to be there, I guess. The woodworm want some wood from us so we’re left with yet another fetch quest. Simon won’t hand the ladder to the woodworm and since I don’t have any other wooden items yet we’ll just have to wait.

Email ThisBlogThis!Share to TwitterShare to FacebookShare to Pinterest
Labels: 1993, Simon the Sorcerer, Will Moczarski

Return of the Phantom - Won and Final Summary

With the switches Will came to my rescue. I checked the first two hints, and it seems like it's the alphabet puzzle I was told to expect. So, that means I need to find a four letter word to type in...er...one that might actually open the door. Daae is the right length, but I don't think I can press the same letter twice...? No. My next guess was Erik, which is a crappy password, but requires one parse what this door actually is. I don't think I would ever guess that, but my normal patience has long since been depleted.

Next puzzle...a spider-web. I assume this is just a test to make sure you picked up that sword in the last room. After the fact anyway, I assumed Raoul was going to break the sword on it knowing his track record. Suddenly, in a blinding flash, the phantom jumps out and Raoul impales him with his sword. Triumph! 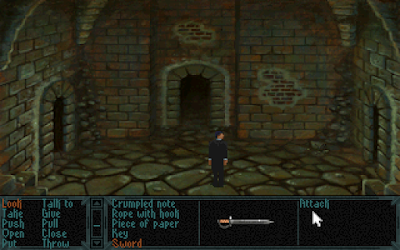 No, I'm screwing with you, there's just more maze. I feel like I can encapsulate this game's puzzle design exclusively with the word maze. Its a curious design choice. 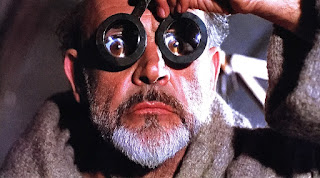 My days wandering (running for the most part) around the abbey are at an end. Will Guillermo and Adso solve the horrid murders? Will I keep my sanity? Will the final PISSED rating be ordained by God or the Antichrist? Let us find out…