Many radio call-in shows had an oft-repeated, somewhat cliched line: "Hi! I'm a long-time listener, first-time caller." I suppose that describes me. I've been reading and commenting on the blog for a handful of years, and finally got around to writing my story and threatening planning to write a missed classic review about a memorable childhood game. The game I'll be talking about is somewhat special to me, because it was my first game of any form I played on a computer that I know of. I hadn't even played Lemonade Stand at school yet, it would be another year before they installed a row of Apple IIe systems in the elementary school library.

Around 1985, when I was about 7, my grandfather showed me this new toy he had. In the family room of his house, he had set up his new IBM Model 5160 computer (known as the PC/XT), complete with an amber monochrome screen and a daisy-wheel printer. It had the latest in cyber-security: that round key that would lock the keyboard. And along with some software programmed "borrowed" from the engineering firm he worked at, he also had some shareware and freeware programs, obtained from mail-order shareware vendors like PC-SIG.
Read more »
Posted by Ilmari Jauhiainen at 00:00 30 comments: 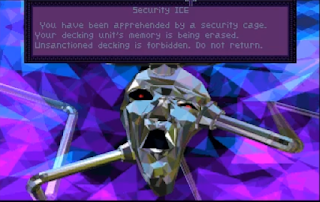 I have to say that BloodNet shares some features with my favourite game of them all. Granted, it’s not on the same level of greatness – not at all, in fact – but maybe the similarities are part of the reason I’m enjoying this game so much. Or perhaps it will become a lot worse towards the end. I’ll save my judgment for later lest I'll have to swallow my words.

Last time a woman named Lenora Major had invited me to her well in the cyberspace to upload my essence into the web. This seemed necessary to enter the headquarters of TransTech so it felt like a good move. I got caught by a Security ICE routine a couple more times and didn’t find out anything new about the web for now so I followed up on some other leads.

First I decided to pay a visit to that bigmouth called Zeus who had challenged me to a duel in real life. After our cyber-standoff a new location was accessible, namely a NYU dormitory close to Washington Square. What happened next was a bit of a surprise.

Blue Force – Not All There 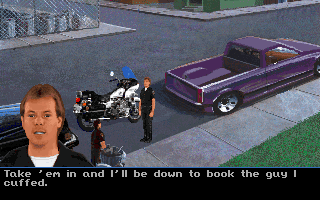 Here are some synonyms for “crazy” I looked up and found on Thesaurus.com:

I’m listing these for your reference so you know what to call me when you learn that I, after another play session of Blue Force, still not only do not hate this game, but actively enjoy it.
Read more »
Posted by Ilmari Jauhiainen at 00:00 9 comments: 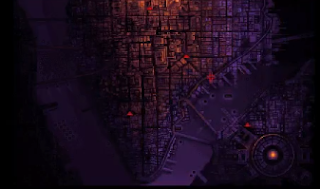 It probably takes a cyborg with a neural implant to process all the data this game throws at you. While after about seven hours BloodNet is consistently entertaining, engaging and challenging my notes do get a bit out of hand. Bear with me as I’m trying to break it all down for the blog – it is a tough ride.

One thing that really dominated my third session was the realisation that some of the locations consisted of two or more screens linked by a small green triangle I had previously neglected to click on.

Missed Classic: Nord and Bert - The One Where I Flipped My Lid

Welcome back to Nord and Bert! This is a strange game: last time out, we defeated Jack Frost to rescue a mermaid and conquered agricultural idioms to save a family farm. That’s three episodes completed with five more to go before Punster is saved and I can move on to Plundered Hearts and Beyond Zork. I respect Infocom and Jeff O’Neill for choosing to do something different and the individual episodes help by letting us play in small chunks, but they are not quite the types of puzzles that I enjoy solving.

Before I get into it, let me admit upfront that this post was a rough six hours of idioms and idiocy. The two episodes, “Eat Your Words” and “Act the Part”, were more difficult for me than the previous ones and I needed to take hints to put them to bed. Fortunately, Nord and Bert features a first-of-its-kind hint system! If you want to know what kind of devilish idioms tripped me up, you’ll just have to read on for more.

Written by ReikoLast time I fell through a strange portal that appeared at the base of the stairs, right where I started the game. The new room I appear in is a large gallery room with what looks like another piano at the far end, and walls covered in a variety of paintings. Immediately a brief scene shows Burden, who recognizes the room, and Edward, who thinks the paintings are strange and sick. I start looking around and find I have to agree with him.

Email ThisBlogThis!Share to TwitterShare to FacebookShare to Pinterest
Labels: 1993, Reiko, The 7th Guest 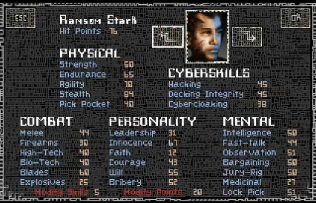 And so it begins again. My next session of BloodNet should have lasted longer than two and a half hours but unfortunately I was sick in bed for much of the week. However, I noticed that it will be necessary to keep track of conversations, hints and locations very thoroughly. Furthermore, The CRPG Addict’s Opening Post on BloodNet made me realise two things: that his writing is a lot better and that I can go through my (in-game) contacts to find some pointers where to go and what to do. It’s not a quest log but still useful.

I had visited most of the recommended locations in my first session anyway but the information about some of the NPCs was still welcome. In the starting location I noticed that I had overlooked an object that sort-of blended with the background. It turned out to be a radiation suit but I am unable to figure out how to equip it. The controls of the game are generally fine but the menus are really quite finicky.

But back to the contacts file: I learned that the Houston Matrix Rovers have a series of illegal WELLs in the net. I’ll be sure to listen to Ransom’s conversations with their members more closely this time, maybe I can figure out a password. In another note, Ransom calls the Flux Riders his “old gang.” One of the Riders’ new members is one Oona Flyte. They met while both of them were out clubbing and Ransom appears to be vaguely interested in her. Could this be the love story some of the promotional materials were hinting at? In contrast to this a note about Monique St. Claire reminds Ransom to avoid “The Abyss” if he does not want to keep running into his ex-lover. Moreover, there’s a warning that something bad is happening in Central Park. “I’d better be ready for action there,” Ransom remarks. Sounds like the cemetery I got slaughtered in last session. 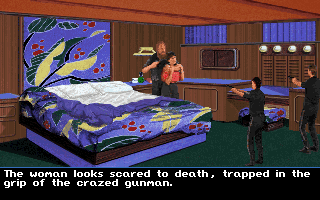 I have a confession to make. Are you sitting down? Good. 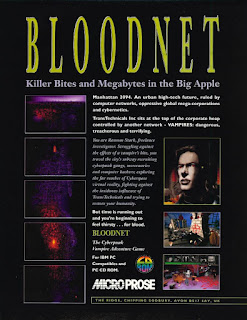 Well, hello again! I have neither forgotten you nor the blog nor the final rating post about Simon the Sorcerer BUT October was a pretty tough month for me and my loved ones so I had to involuntarily take a break. But that’s all over now and here’s BloodNet, “The Cyberpunk Vampire Adventure Game.” Time to get excited! I’ve heard a LOT of … well, miscellaneous things about this game and have been wanting to play it for quite some time. Some people seem to love it while others despise it, yet again others are left unmoved by the experience. A game with such an effect may be perfect for some simul-blogging, don’t you think? Oh yes, you do. Which is why I got in touch with “Chet” of The CRPG Addict fame when I saw that BloodNet was coming up on his master list. And because he would get there much earlier than us if we just stuck to our regular schedule we decided to play BloodNet earlier than intended (for our blog, that is) and thus present you with a thrilling CRPG Adventure Guild Addict double feature! Like I said: time to get excited!

Our introductory posts will be released simultaneously, after that we’ll be alternating posts about BloodNet on a weekly basis (every Thursday) so you sort of get to read two blogs for the price of one.

Today I've got a very unusual treat for you, a trifecta of discussion points that have never been combined on this blog, haven't appeared on this blog before, and in all likeliness will never appear again. This is Lucio Fulci and Italian cinema, Dutch language games and text adventures. If you don't know who Fulci is, I'm going to explain in detail, but for now, he's an Italian horror director who's work filled banned and cut films lists throughout the 20th century. Unlike other directors, his films deserved it.

As such, you better believe this is the kind of entry you don't want to read while eating. I'm not going to show anything, don't worry about that, but I will in place of scenes I don't wish to show you or describe instead show you cursed images taken from games you've never heard of before. Or just some weird images. Gotta get a point across somehow.