It's time for another of our traditions: the annual end of the year game! This time, it will be a tale of horror - but will it be a horror to play? Only time will tell! 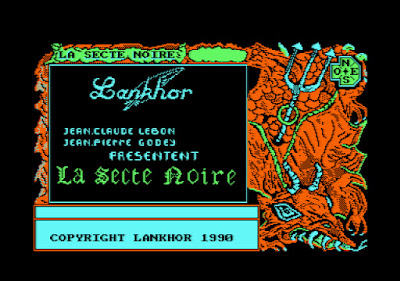 Our readers know their adventure games and their relative merits and faults. Indeed, usually their predictions on what a game will score is spot-on. In the rare cases they miss the mark completely, we are usually covering some not-so-well-known game, which only the most hard core adventurist have even heard of, let alone tried. One of these games was Lankhor’s Maupiti Island, which most people thought would land in 30s, but managed to get a middling 41 PISSED rating.

Of all the games I’ve played for this blog, Maupiti Island has definitely been one I’ve been most conflicted about. It had a complex story that it was intriguing to unravel, but it had enough problems, like impossible puzzles, that made actually playing the game a slog. Despite the faults, the game made an impression on me, and I was waiting to get to play the next and last Lankhor game on our official list, Black Sect.

Doing some preliminary research, I noticed that Black Sect was a retelling of Lankhor’s earlier game, La Secte Noire, which I decided to play as this year's final game. La Secte Noire also had a sequel, La Crypte des Maudits, which I'll probably play as a Missed Classic at some point before tackling Black Sect itself. I also noticed that we hadn’t really discussed Lankhor itself, when reviewing its games. This is a perfect opportunity to delve a little bit more to the history of this game developer.
Read more »
Posted by Ilmari Jauhiainen at 00:00 12 comments:

Merry Christmas! I have a confession to make. When I set out to play a Christmas adventure game for the first time back in 2014, I had a game in mind. I vaguely remembered it, but I knew that it was a text adventure that I first played sometime in the mid-90s. I was just learning Linux and had installed Slackware, probably around 1994 or 1995. Included with the distribution was a handful of text-based games: NetTrek, Hunt the Wumpus, Dungeon (mainframe Zork), and others. While I searched around for another text adventure, I found a surprise: a Christmas spoof, very dystopian, where you were challenged to combat the consumerism of the holiday. It also involved dying a lot and being reincarnated as your clone. This game was Paranoia, based on the table-top game of the same name, but I was completely unaware of it as anything other than this amazing experience hidden among the Linux arcana.

A few years ago, I tracked this game down again based on my half-remembered experiences. Fortunately, “Christmas” and “dying clones” don’t go together very often! I expected it to be ancient in computer terms, as vintage at least as the mainframe ports that made up most of the games on the system. Surprisingly, most online sources placed the game as having been written in 1993, and my own research discovered no earlier copies. Eventually, TAG made it far enough in our timeline for me to look at the game for real. Like so many things I thought I knew about this game, that date was wrong.

We’ve told some great stories here and our Christmas games make for surprisingly good ones, but this is the first case I’ve ever seen where the game’s writer was unaware of the game’s release or enduring popularity… until I called him thirty-five years after the last time he thought about it. More after the jump.

An American Tail - Get Shorty

At this point I’ve elected not to watch the movie(s) before playing the game. Though it would probably give me a bunch of context, it might also give away plot points or possibly puzzles. Also, I’d like to see if the game is able to stand on its own feet with regards to storytelling, or if it will just assume that I already know what’s going on.

But let’s take it from the start. As you may recall from the intro post, I’m playing poor little mouse Fievel Mousekewitz, who just migrated from his home in Russia to New York, and got separated from his family along the way.

We start off at the dock in New York, where the only thing I can interact with is a somewhat suspicious looking rat, Fievel himself and a couple of exits. One thing of note: I can’t move Fievel around on a screen. He just stands firmly in one spot until I click an exit, after which he does a short walking animation.

Welcome back! It’s December already and I hope you are getting ready for your holiday cheer. When we last left Stationfall, our intrepid hero had just arrived at Space Station Gamma Delta Gamma for a mission of great importance: pick up a shipment of bureaucratic forms and return them to our ship, the SPS Duffy. Unfortunately, something feels wrong as soon as we arrive. There is no greeting party and as we explored, we discovered the whole station seemingly abandoned. Eventually we made our way to a scientific module where we discovered a holding tank with a large hole in it. What evil is prowling the corridors? Where is the crew? And how will we escape the deserted station with no fuel? We have quite a mystery on our hands!

The beats so far between Planetfall and Stationfall are eerily familiar. Perhaps, too familiar? In that first game, an emergency forced us to escape to an unknown planet only to find it completely devoid of life. We explored empty area after area to gradually unlock the clues behind what had happened to the world’s population and to find a way home. In Planetfall, the emptiness was part of the point; the lonely tone could only have been created by having a wide (but population-less) area to explore. Stationfall has so far copied both of those beats exactly, landing us in yet another vast empty area that we have to map and gradually sort out to find out where everyone went and how to get home. Whether we decide that this game is brilliant or derivative will ultimately come down to how well the new game justifies the return to the same old beats. Planetfall was amazing, but I didn’t want to play it twice.

Given all the mapping and exploring to do, this week’s post is pretty much just that: mapping and exploring. There’s a lot of ground to cover, but no real way to tell this game in a linear way. You get to explore it the way I am, with a lot of open questions that will (I hope!) coalesce into a puzzle-solving frenzy over upcoming weeks. This will likely be our last Stationfall post this year, but we will resume full force in January.

Missed Classic: The Count (in Japanese)

There haven't been a lot of Japanese games on TAG. There haven't been any, actually. This is not necessarily due to a lack of them translated into English, but the only big ones released in English by '93 are Murder Club and L-Zone. Why Trickster never covered Murder Club isn't a mystery, it wasn't on Wikipedia's list of graphic adventure games when he started. I don't know why L-Zone got missed in '92 or '93.

First, a little context. The first Japanese text adventure that is very muddled. At first I assumed that Mystery House, the Sierra game, got ported in 1982 and then people were inspired to write their own. I don't remember where I got onto this track, but I suspect the rip-off of Mystery House, called Mystery House, this one made by Micro Cabin, was inspired by the port, rather than the original version. I'm not sure there's a real first Japanese text adventure, sort of how such things were inevitable in the western world.

In 1983 The Portopia Serial Murder Case was released, the first major Japanese-style adventure game, where instead of doing actions on things or typing it out, you select from a list of options. For some reason that will become clear as you read, this was unimaginably popular in Japan and a good chunk of Japanese games were inspired in some way by it. As a result, actual text adventures never really took off in Japan, though there would be a few titles per year up until the early '90s. (this was all helped by Japanese computers tending towards smut than entertainment) Western graphical adventures would have a distinct niche, but usually ported to consoles and there are very few Japanese attempts at the genre.

Email ThisBlogThis!Share to TwitterShare to FacebookShare to Pinterest
Labels: 1979, Morpheus Kitami, The Count

In 1986 Amblin Entertainment (Steven Spielberg’s movie studio) decided to challenge a certain other animation studio’s market dominance on animated anthropomorphic mice. Their champion was a movie about a jewish-russian mouse named Fievel Mousekewitz, who has to leave Russia with his family, to avoid persecution by anti-semittic cats. The Mousekewitzes decide to go to America after being told that there are no cats there. They manage to board a ship to New York (where else?), but before they arrive at their destination, there’s a storm, and Fievel gets washed overboard. Believing that he’s dead, the rest of his family continue on their journey. Fievel manages to hike a ride with a floating empty bottle and ends up in New York after all, where he sets out to reunite with his family.
Read more »
Posted by Ilmari Jauhiainen at 00:00 16 comments: