It took me under three hours all up to finish King’s Quest. Anyone playing it for the first time will unquestionably need more than that to locate and take possession of the three magical items requested by King Edward, but the large portions of the game I recalled from my youth made the forgotten sections far easier to deal with. It’s actually very difficult for me to tell whether the game is much easier to complete than I remembered, or whether my previous experiences with the game just make it seem so. On the surface there doesn’t seem to be a heck of a lot that would cause too much of a problem for the seasoned adventurer, as long as you uncover the necessary items before visiting certain areas. Then again, the parser technology itself makes what would otherwise be pretty straight forward puzzles far more challenging at times when the player doesn’t use the exact words it’s expecting. 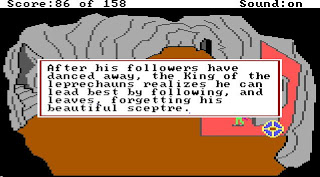 Hmm, everyone's danced away. As leader I really should leave all my possessions behind and follow!

A very simple example of this is as follows. There’s a section in the game that requires you to slay a giant to retrieve a chest. Just a couple of screens away is a tree with a hole in it where a slingshot is located. Now I knew that the slingshot was in there from past experience, so when my command of “look in tree” resulted in “you can’t do that, at least not here”, I figured I simply had to try the command a different way to find what I was looking for (“look in hole” worked a treat). Another player that didn’t know anything was in there, let alone that they needed a slingshot at all, might have walked away, spending the next few hours trying to find a way of defeating the giant before giving up. This sort of deficiency with the text parser is probably what made the game, and others using Sierra’s AGI system, seem so much harder the first time around. Once you’ve played a couple of these games you begin to learn what commands work, and you also get a bit of an idea about the types of places that the creators hide items. 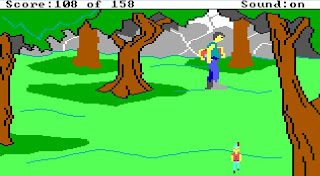 I recall being petrified of this giant as a kid

So I’ve mentioned that King’s Quest 1 is relatively easy to complete, but that’s not to say that there isn’t anything challenging in there. Climbing the beanstalk will undoubtedly require numerous restores, but there’s one particular riddle that is next to impossible to solve. I knew how to figure out the answer this time around after using a walkthrough (for this bit) last time I played, but I’d love to hear from anyone that honestly managed to figure it out themselves. I’ll describe the riddle and the solution now, so if you really want to try your luck, skip the next paragraph. It’s worth mentioning that to Roberta’s credit, you can still complete the game without solving the riddle, which is surely one of the first examples of multiple pathways through an adventure game. There may have been alternate solutions to interactive fiction games, but I haven’t played enough to know. I’d be interested to hear from anyone who has experienced such a thing prior to King’s Quest. 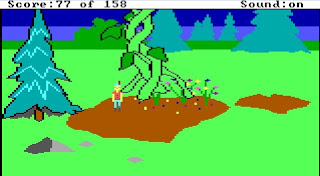 Jack and the Restore (many, many times!)

Graham meets an old gnome on his travels through Daventry who offers a gift if Graham can guess his name within three attempts. There’s not really any hint around as to who the gnome is, but if you just happen to be super knowledgeable about fairy tales, you might take a stab at Rumplestiltskin. You’d be wrong though, as there’s a note that can be found in the gingerbread house that states that sometimes you need to think about things backwards. OK, so if you assume that this message is meant to be applied to the old gnome’s riddle and not somewhere else in the game, you could guess nikstlitselpmur. This answer would be correct in the more forgiving remake of the game, but in the original you would still be incorrect. The way to solve it is to reverse the alphabet and to replace the letters of Rumplestiltskin with the newly ordered code. A becomes Z, B becomes Y etc., so Rumplestiltskin becomes Ifnkovhgroghprm. Seem ridiculously hard? Well, imagine my surprise when I entered the above this time around, only to be told that it was still not quite right. For some unknown reason, you have to type the answer in capitals, making this puzzle one of the most stupidly difficult ones I’ve ever come across. 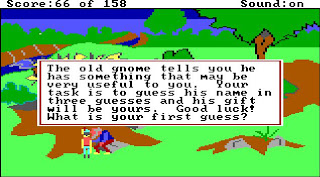 Roberta has since stated in interviews that she “received a LOT of letters about the old gnome's name” and that “it was an awfully nasty puzzle”.  Anyway, I ended up finishing with a total of 141 out of 158, and considering I never used my ring of invisibility, can only assume I missed an opportunity to use it. I do seem to recall killing the witch last time I played, but since she wasn’t home when I blatantly burgled her, I didn’t need to endanger myself this time round. In the end, despite the problems with the text parser, the movement speed (or lack of), and the harshness of that riddle, I still found King’s Quest to be enjoyable and look forward to moving on through the rest of the series (I believe I’ve only ever played the first three games). I remember very little about part two, but it will probably come flooding back to me as soon as I start playing. We’ll soon find out, but first I need to apply the PISSED rating system to King’s Quest 1. Stay tuned… 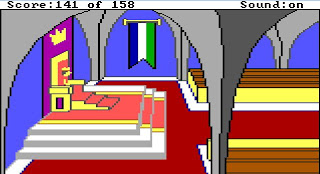 Hail to the King baby!
Posted by The Trickster at 14:34

Email ThisBlogThis!Share to TwitterShare to FacebookShare to Pinterest
Labels: 1984, King's Quest: Quest For the Crown