Adam’s Journal #8: "What a ride! I’ve finally made it to the City of Gold, but I never dreamed I would be flown there by a giant eagle! At first I thought I was going to be the eagle’s dinner, but then she turned out to be really nice. Now we’re so close to finding Forest Heart’s seedling. I can’t wait!"

We've made it to the heart of the City of Gold, a small stone room at the top of the maze. Inside, the far wall displays a curious grid of nine squares carved with some shapes that look rather jumbled. Another panel on the wall nearby crudely depicts a king and a serpent, guarding the way. On the grid, I can press any of the squares to change which of three choices is displayed. One choice is blank with a solid red border, another has part of an image with a double orange border, and the third has part of a different image with a red zigzag border. The center square doesn't have a border, but one choice is clearly blank, so it's easy to match the other two in the same order to complete each image.

Adam’s Journal #7: "I knew a lot of kinds of bats existed, but before recently, I had never seen so many different kinds in one place before! I’m glad I could help them a little, but now I have to help Paquita too. The Fountain of Youth is the only thing that can heal her. Good thing it’s supposed to be in the City of Gold where I was going anyway."

Last time I was all set to board another boat to take us down the polluted river to travel toward the City of Gold. There we can find the seedling for Forest Heart and the Fountain of Youth to cure Paquita. Of course, it's not going to be quite that simple.
Read more »
Posted by Ilmari Jauhiainen at 00:00 4 comments: 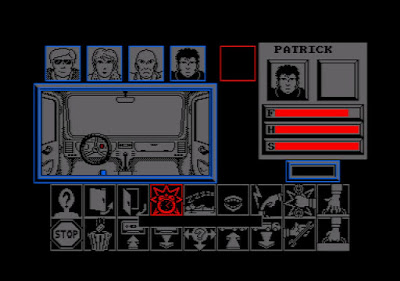 When I reviewed Putt Putt Joins the Parade, I was a bit anxious whether I could rate a children’s game fairly. With one Humongous game already under my belt, I think I have a better grasp on what works and what doesn’t in these games. Let’s see if teddy power beats an automobile!