Déjà Vu begins with the main character (the player) not remembering who they are, or how they came to be where they are currently located. In this case that location is a seedy toilet cubicle, and your character has a large bump on his head and an apparent needle mark on his arm, suggesting foul play. Strangely, you still pack a loaded .38 revolver, some cash in a wallet (that sadly doesn’t contain a license), a key with the word Office on it, and various other bits and pieces. The only indication of who you might be is the initials J.S. that appear on a few items. It’s a suitably mysterious opening to what is clearly a noir-influenced adventure game and one that immediately has you looking for any clue you can find just to figure out who you are. That quest is quickly given more urgency once you realise the clock is ticking, as your condition deteriorates fairly rapidly due to whatever drug you’ve been injected with. 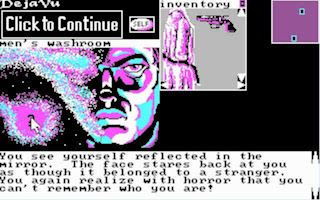 Who am I? And why do I have pink and blue makeup on!?

It’s a good premise, and after playing the game for just over an hour so far, it’s clear that there’s a lot more intrigue and mystery to come. After exiting the bathroom, I’ve now made the gruesome discovery of a dead body in the office block, found a room with what appears to be a restraining chair and evidence of injection materials, and followed a few loose leads that I’ve discovered on notes and cards. I’ve come up with more questions than I have answers and have died multiple times, including being shot by a mugger, blown up by a car bomb, and most surprisingly, attacked by an alligator. Successfully gaining access to new areas and finding pieces of evidence regarding who I am is really satisfying, and bit by bit I’m progressing further and further into the story. But, despite how intriguing and well crafted the plot of Déjà Vu is, there are numerous issues that are making playing this game somewhat challenging.﻿ 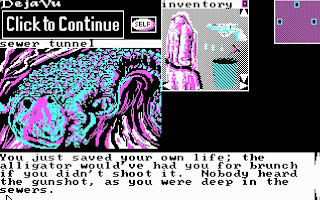 As if traversing the sewers wasn't bad enough, now there's frickin alligators down there!!??

﻿First, and most obviously, the graphics are really quite crappy. Yes, they have the same four colour palette that I was subjected to in Below the Root, but given a fair amount of Déjà Vu revolves around discovering items in static images, it’s far more detrimental to the experience. Having only played the game a short period, I can’t yet tell whether or not I’m missing items through lack of visibility, but CGA pixel hunting doesn’t sound like much fun to me. Secondly, the interface is clunky as, with the inventory in particular making the collection of evidence a chore rather than a pleasure. You store objects by dragging and dropping them into the inventory, but there’s no slot system to speak of, so you can drop them anywhere you want. This means items sit on top of each other in what is a very small window, making it difficult to find what you’re after. The space restrictions are lessened by the ability to store items within other items, such as your jacket, wallet and bins, but once you’ve got items spread throughout numerous “containers”, the item sourcing problem is only exacerbated. 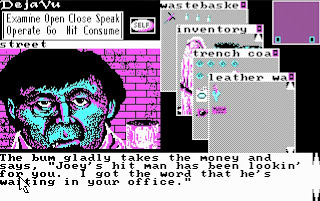 I really don't look forward to a time when I need to find an item quickly amongst multiple inventories.

Removing the text parser, that had been part and parcel of adventure games to this point (and into the future for companies such as Sierra), was indeed pioneering and deserving of commendation. As the first true “point and click” adventure game, Déjà Vu contains a similar interface to the one that LucasArts would use for their SCUMM based adventure games such as Maniac Mansion, Secret of Monkey Island and Indiana Jones and the Fate of Atlantis. Unfortunately they didn’t get it exactly right on their first attempt, and I’ve found myself regularly struggling to get it to do precisely what I what it to do. The main issue is that you have to click on a command (such as Examine, Open and Operate) before clicking on an item, and if you try to do it the other way around, nothing happens. I don’t know how many times I’ve selected an object on screen and, after realising it’s something I can get more details about, clicked on Examine, only to find that now I’ve merely selected Examine and need to re-click on the object. It doesn’t sound like a big thing, but it’s these sorts of things that make interfaces feel counter-intuitive. 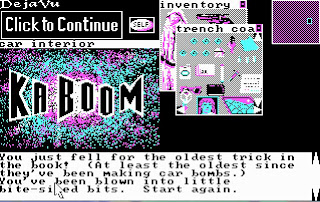 The game is unforgiving enough without having to deal with the interface.

﻿It’s also worth mentioning that despite ICOM taking the text parser out of adventure gaming, there are a few times during the game that I’ve had to type in what I’d like to say to a character. Fine you say, just use the skills you’ve gained through playing the likes of King’s Quest, but with no basis for knowing how the text parser might work, it’s difficult to know what language it’s looking for. It’s fine when I get in a cab and he asks me where I want to go, as giving him an address is an obvious response. But when you’re confronted with a paperboy and an empty text box, it’s hardly apparent what it is I’m supposed to say (no, “buy paper” didn’t work). This aspect of the genre would eventually be replaced by dialogue branching, with the game giving the player a few pre-defined options of things to say, and that’s something ICOM could have made excellent use of in Déjà Vu. 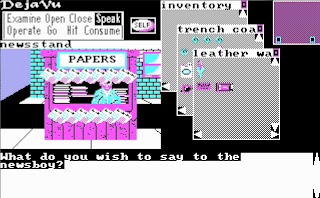 Um...hello? Buy paper? Do you know who I am? Can you tell me how this text parser works?

﻿Ignoring all of these interface issues, probably my biggest concern with the game right now is the time limit. It seems that my condition deteriorates even when I’m not doing anything, and given I’m having to check every room thoroughly on my first play-through, I’m finding my character very close to death before I’ve really achieved anything at all. I’m yet to know whether there’s a point in the game where the time limit no longer applies (perhaps I can get medical attention?), but if not, Déjà Vu is either a very short game or playing it through DOSBox is causing time to pass much quicker than it should, thereby making it impossible to finish. I’m hoping the former (unless there's a cure, in which case I welcome more plot development)! Of course all of this is made much worse by the fact I’m trying to blog my experience, as my character goes downhill while I take screenshots, fill in my map, and write notes on my progress. I think I’ll be restarting Déjà Vu many times during the next few days, quickly completing everything I know of and then saving my game (with a filename starting with A,B or C of course). Only time will tell whether I’ll actually be able to complete the game, unless someone out there can at least inform me of that? 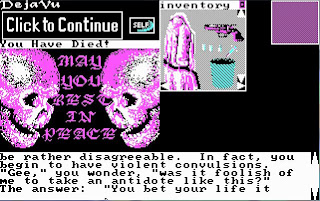 Everyone loves an antidote red herring!
Posted by The Trickster at 09:10