Missed Classic: Trinity - Gyre and Gimble in the Wabe

Welcome back! It was a bit slower going than I had hoped to get here, but we got here nonetheless. Last time around, we jumped into Trinity and an exploration of a near-future Kensington Gardens followed by total nuclear annihilation. Fortunately, we escaped just in the nick of time into a magic door in the middle of a pond and now we are somewhere else. What are we doing there? What is the point of the game? I have no idea, but that lack of knowledge is exciting… also potentially depressing, but I’m going to favor “exciting” for now. If you are confused, just read the previous post and you’ll at least be caught up to where I am because getting this far was quite a ride.

This has been a difficult post to write for several reasons. First and foremost, I struggle to get into the right headspace for this game. The themes are heavy but the puzzles are whimsical; it’s discordant and wonderful. But talking about nuclear annihilation, even when couched in a “fun” adventure game, is difficult to do. I have to force myself to play and then I have to force myself to write about it afterwards because this is a place my head does not want to go. I can only imagine how screwed up Mr. Moriarty must have been having been deep in this game for a year or more, at a time when its terrors seemed even more real than they do today. Add to that my own inadequacy in discussing this game, so beautiful and well-written that my ham-fisted prose seems inadequate. I feel like I am penning a Readers Digest edition of Macbeth. All of our contributors have a tendency to fill in the gaps as we describe our games, to describe how they play in our heads as much as on our screens. With Trinity, it is a very different problem of trying to convey a great game through my own experience. I hope I do it justice.

All that said, this is the first game I have played in forever that has given me nightmares. Is that worth a bonus point in our rating system, or not?

Agent 5 Journal #2: "I've managed to avoid the distortion wave and retrieve the unaffected archive of history. The computer then determined that there were three separate interference events in the past that changed the flow of time. So far, I was able to save Dr. Castillo and destroy a murderous robot, but I've still got a lot of work to do, and it's not going to be easy. I'm going to have to put forth maximum effort to outsmart whoever it is that's caused all this damage!"

To review, I have to prevent three major changes in history: a missile launch toward Gorbastan from a NORAD base in 2112, the destruction of the Morimoto colony on Mars in 2185, and the death of speaker Enrique Castillo at the 2310 rally in Australia. Together, these three changes tipped the balance and prevented the Cyrollans from offering humanity membership in the Symbiotry.

I have no idea at this point how interlinked the solutions to each time period will be, nor how difficult they'll be, so I anticipate having to take a look around each one before I figure out what I need to do. I'll start with the earliest time.

Email ThisBlogThis!Share to TwitterShare to FacebookShare to Pinterest
Labels: 1993, Reiko, The Journeyman Project


All things come to an end, but some things just don’t know when to end. Last time I had led goblins to a giant beanstalk, which magically transported all the goblins near the village where I started. Unfortunately, prince did not want to come down, because he was hungry. Really? This seems a bit anticlimactic turn of events.

Agent 5 Journal #1: "Today was not a good day to oversleep. If I hadn’t made it to work when I did, we all would have been erased permanently. This is the most major time rip I’ve ever seen, and I’m the only one who was on duty and escaped being rewritten by the distortion wave. I have to fix history!"

When I start Journeyman Project from the menu with the New Game option, I first get a video with voiceover explaining the historical background of the scenario. I summarized this in the introduction. The important thing to remember is that we are at a critical point in history, so of course, when time travel is involved, something is bound to go wrong, and we have to travel through time to fix it. And of course, when there's an elaborate procedure and complicated equipment to fix whatever's gone wrong, then we'll definitely have to use that procedure and that equipment.

After the background, there's an intro video, which starts by zooming out from a floating city, which suddenly explodes. I'm guessing that's a dream, since then we see an alarm clock going off, implying that Agent 5 has just woken up. As he reaches out and puts on his headset, the interface forms around the picture, and a side screen runs through diagnostics as what sounds like a radio program greets its listeners.

Email ThisBlogThis!Share to TwitterShare to FacebookShare to Pinterest
Labels: 1993, Reiko, The Journeyman Project

Last time I got the impression I would start this section instantly from the throne room. Alas, my journey from the subterranean sea ended somewhere else.

Still, throne room wasn’t far away, so let’s move there for a while. 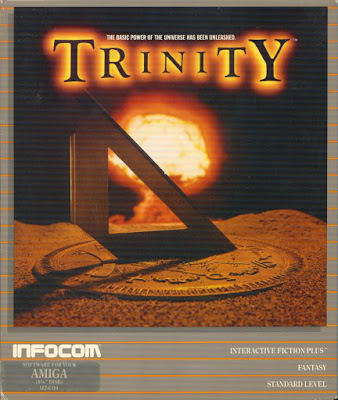 I should be at the beach and instead I am playing a game that is equal parts charming and deeply disturbing: Moriarty’s Trinity, a “fantasy” adventure game about inevitable nuclear armageddon. Much like A Mind Forever Voyaging, this is a game with a narrative purpose and a political bent, but also a product of its time. The Cold War had nearly boiled over and Moriarty’s message about the risks of nuclear proliferation was timely, even if I am uncertain how much anyone wanted to play a game about it. As I am writing this now, I’m not sure I want to play a game about it. At a time when nationalism is on the rise worldwide and new walls are being built, when Russia announces new “hyper sonic” missiles that are designed to pierce existing defense systems, and when North Korea promised a “Christmas present” that would let their own stockpile of nuclear weapons reach American shores, it’s hard to enjoy a game about it. We are still far from the brinkmanship of the Cold War when Russia and America played chicken with our lives, but it feels like the world is moving in the wrong direction.

I have been waiting to play this game for months. I had intended to rush it between Batman Returns and Consulting Detective II, but I pushed off after being warned that I would want to savor it. Beyond that, I don’t know all that much about the game itself. It was distributed on the second Lost Treasures set, so I owned it but never started it even once, nestled as it was in a submenu next to Sherlock Holmes and Wishbringer. I have since learned that it is considered one of Infocom’s finest works, but that is a reputation I was unaware of then and which I look forward to discovering the truth of now.

I am probably overthinking it, but I have a hard time understanding the geography of the game. The world outside the castle shows no sign of a sea nearby. Still, under the castle is what the manual calls a sea passage. In fact, it is so big a passage that it holds a sunken boat and a mermaid population. Maybe the castle and the lands surrounding it float on top of the ocean?

Before submitting WEEN to the PISSED rating, we need to study the alternative paths that you can take through the game. I counted two (but I might also have missed something), one using the fish amulet to breathe underwater, and the other attainable by choosing the second door when you exit the temple, just before the ant garden.

Gobliins 2 - Pass Me the Mayo

Last time the goblins had just infiltrated the castle grounds and found a friendly dwarf who had promised to help them, if they just brought him an imprint of a lock in a chest.

Adventure Gamers, I am very excited to begin a new series with you all. This post will be an introduction to the first game in a groundbreaking time travel series: Journeyman Project! I've been looking forward (backward?) to covering the first Journeyman Project because JP2: Buried in Time and JP3: Legacy of Time were two adventure games I owned and enjoyed when I was school-age - I think I still have the boxes somewhere even. But I never played the first game at that time. (For some reason, for several years I kept starting with the second installment of an unfamiliar series - I believe I mentioned that when I covered Gateway, but it happened with books, too.)

At last, I have vanquished Ween! It took me long enough, not because it’s a particularly long game but especially because I have had a few extremely busy months, and very little time to play or write about it. I apologize for my fellow readers (and to the ones who were playing along and have probably finished the game by last October). But we are closing in on KRAAL and the REVUSS! Last time we stopped, we were entering the heart of the Volcano and been greeted by a menacing gargoyle resembling a Ghostbusters demon dog.