My prediction that I’d complete King’s Quest II in around another hour turned out to be correct. While there were a few sections I had no recollection of and had to put some thought into, most of it was fairly straight forward and I imagine wouldn’t pose too much trouble to experienced players. Probably the two most challenging parts were getting the boatman to take me across the lake to Dracula’s castle (he signals that he wants an item, but the solution doesn’t require giving him one), and figuring out what the hell I was supposed to do once I found Valanice. I spent no less than fifteen minutes standing in the tower next to Valanice wondering what it was I was supposed to say to her or what item I was supposed to give her to finish the game! I eventually fell back on studying each item I had in my possession for clues, which turned out to reveal what was required, but I felt a bit stupid there for a while. I had a bad feeling that in all my cockiness and eagerness to complete the game quickly, I’d totally missed an important item somewhere along the way. 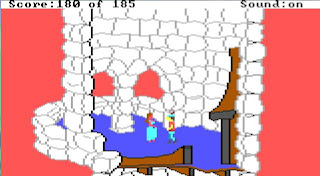 ﻿I’m not sure that I’ve ever finished a Sierra game with full points, and this would have to be the closest I’ve ever got. Finishing on 183 out of 185, I really had no idea on completion where those two points were that I missed. My first thought was that maybe it was possible to cross the bridge two more times (you get 1 point every time you successfully cross it), but a quick restore proved that wasn’t the case (it collapsed with Graham still on it). I resolved to check a walkthrough to see if I could figure out what it was I missed, and it turns out the only thing I didn’t do was cover the nightingale cage when removing it from Hagatha’s cave. I didn’t actually need to do that as Hagatha wasn’t home when I came to fetch it, but apparently you can still take the cage while she’s present if you cover it to avoid the nightingale making any noise. Regardless, I’m pretty happy with 183, and feel no need to go back and complete the game with full points, particularly as I cheated by reading the walkthrough. 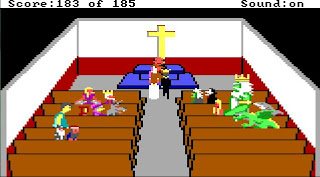 No wedding would be complete without everyone that's ever tried to kill you in the audience!

﻿Playing through the first two games in the series back to back has really given me a chance to discern the changes and improvements that occurred between I and II. I’ve already mentioned some of the interface changes that made the game more enjoyable to play, and how the second game’s story progresses in a more linear fashion, but one of the other additions in the sequel is comedy. Admittedly, the comedy is not really found within the story itself, but through various Easter eggs and random events that surprise the player from time to time. If you visit Hagatha’s cave enough times, you’ll eventually be confronted by the bat mobile driving around, backed by the batman theme music. The developers even programmed in a few plugs for their other games that the player can stumble upon occasionally, most tellingly a full blown trailer for Space Quest that bombards a confused Graham when he peers into the hole of a rock. This blatant marketing could perhaps be seen as being in bad taste, but it’s done in such a way that it’s really quite hilarious, and doesn’t at all seem out of place in the anything goes fantastical world of King’s Quest. 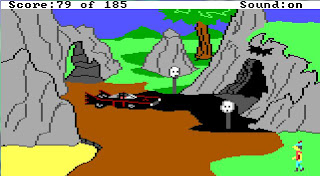 ﻿It should be apparent by now that I enjoyed King’s Quest II quite a bit, but the truth is a lot of the problems with the first game are still present. Given the technology used to make it was almost identical, I guess that shouldn’t be all that surprising, but it can’t be ignored. I’ll save the pros and cons for my PISSED rating post tomorrow, but I’ll leave you with one particular puzzle that should give you a good idea of just how silly things are in the King’s Quest universe. On finally unlocking all three doors and walking through to a strangely coloured new world, the player finds themselves situated next to the water, with nowhere to go. The only item available is a fishing net, so it makes sense to throw the net in the water and see what happens. Lo and behold, you catch a large golden fish, which then flops around on the ground as if dying. You can try talking to it or picking it up, but the only thing to do is throw it back in the water. The fish is so happy with you for saving it, despite the fact that you ripped it from the water in the first place, that it offers you a ride across the water. That’s like robbing someone of their possessions, giving them back to them, and then having them offer you their thanks along with the aforementioned possessions as a gift! 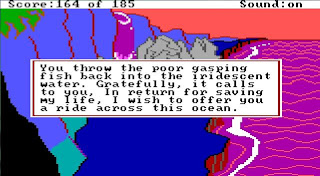 I assume you're a giant goldfish and have already forgotten the bit where I nearly killed you!
Posted by The Trickster at 16:18