There’s something extremely comforting about starting these early Sierra games. I don’t know whether it’s just my slight obsessive compulsive disorder (which is what leads me to write a blog like this in the first place) that makes going from screen to screen trying to find hidden items so enjoyable, or whether this process is something the majority of gamers are attracted to. Either way, just as with King’s Quest I, I spent the first hour of the sequel mapping out the game world and adding as many items to my inventory as possible. The creators expanded the standard playing area by only one screen, with the grid being 7 x 7 this around rather than 8 x 6. The main difference is that the game only wraps around north and south, with the west blocked off by the ocean and the east by a tall mountain range. Graham starts his journey on the beach in the west, having apparently travelled to Kolyma in an undisclosed fashion (are we supposed to assume a boat?). 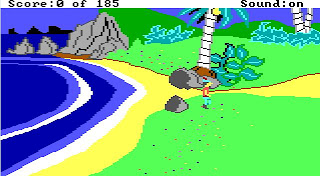 King Graham steps off his hover-rock to begin his quest

There are two interface improvements that are immediately noticeable when playing the game. Firstly, an extra speed option has been added to the menu system. King’s Quest I offered Slow, Normal and Fast, with the first two being unbearably slow, while the latter was unplayably swift. King’s Quest II offers Slow, Normal, Fast and Faster, and it turns out Fast is a perfect speed to play the game without having to wait for Graham to crawl from screen to screen. The second improvement is that the player can now get a fairly detailed overview of the area they’re in by typing “look”. No longer are you required to type in “look at tree”, “look at rock”, “look at painting” etc. attempting to figure out which items on each screen are worthy of attention. If an item isn’t mentioned in the description that comes up, then chances are it’s not relevant. This undoubtedly makes the game quicker to solve for first time players, but it allows you to focus on what’s important rather than concentrating on what’s not. 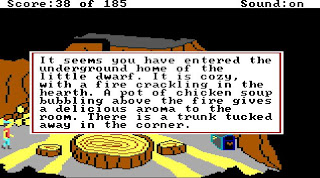 So chances are I need to do something with the soup and the trunk.

Gameplay itself is very similar to the first one. Most items can be found either sitting out in the open waiting to be picked up, or hidden in fairly obvious hollows such as stumps or mailboxes. There are certain individuals that can randomly appear on particular screens that should be avoided (Hagatha the witch will grab you and put you in a stew, the Dwarf will steal your items and hide them in his home) and a fairy (filling in for the fairy godmother of the first game) that enchants you, making you immune to the aforementioned baddies for a period of time. However, there is one important change in gameplay for King’s Quest II, which is that it has linear story progression. King’s Quest I allowed the player to go anywhere they wanted, even if they didn’t have an item necessary to complete the destination, resulting in instances where the game was not solvable. In King’s Quest II, there are certain areas that only open up once you’ve completed a certain task, such as the Antique Shop, King Neptune’s underwater kingdom, and Dracula’s castle. This is a welcome change and one that would make its way into future adventure games. Yes, that's Graham in Hagatha's stew. No, that's not supposed to happen.

I’ve played the game for just over an hour, and I’m pretty sure I’ve collected everything there is to get without reading the first inscription on the magic door that hovers near the eastern mountains. One thing I do remember from last time I played the game is that you can only cross the bridge that leads to the door a finite amount of times before it collapses, so with that in mind I decided to complete as much as I can elsewhere before going across and setting the main quest wheels in motion. There’s no doubt that King’s Quest II is a better game than the first one in almost every respect, and it reminds me of just why I loved these games so much as a young boy. Once again I remember far more from those early years than I expected to, and I figure I’ll be able to finish the game in another hour or so. Then again, anyone that plays adventure games will know how stuck you get just when things are going so well. I must admit, I’m looking forward to playing a game I’ve never played before, for the challenge as much as the new experience. 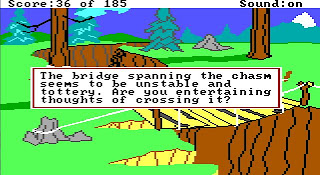 It's time to cross the bridge and get things moving.
Posted by The Trickster at 15:47