King’s Quest holds a special place in the history of computer games, pioneering the way for many years of Sierra titles that used either the same technology, or gradually improving variations of it. From that perspective, it really should be given nothing but praise and adulation! But this blog isn’t only about figuring out which are the most important adventure games in the history of the genre (although that certainly plays a role), it’s also about finding out which ones are still enjoyable to play today. With that in mind, the PISSED rating system may not be too kind to this undeniable classic. Let’s find out!

Puzzles and Solvability
For the most part, King’s Quest is about finding objects and figuring out when to use them. On that level, the game is pretty successful. If you have the cheese and the carrot when coming across the rat and the goat, it’s not difficult to figure out what to do. When you have a bucket of water in your inventory and you’re confronted with a fire-breathing dragon, you don’t have to be Einstein to introduce one to the other. The challenge is in finding the items before you need them, and in knowing what commands to give that the parser technology understands. This last statement, combined with the fact my first adventure games were all by Sierra, is probably the reason why I formed the habit of mapping out the whole game area and collecting items before trying to complete any puzzles when playing adventure games. Of course none of the above can prepare you for the stupendously difficult Old Gnome question, but the alternate solution to the game means I shouldn’t be too harsh on that one. I’m giving the game a 6 for this category. 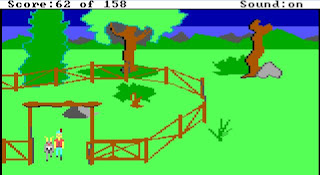 My very own pet goat!

Interface and Inventory
There’s not much to say about inventory here. It’s easily accessible and allows you to inspect individual items in more detail, which can lead to very important information. The interface is a different story! Credit must be given to Roberta Williams, and the team of developers that made the game, for producing the first animated adventure game. For the time it was truly impressive and groundbreaking, and led to pretty much every adventure game made since! However, the fact is that the limitations of the parser technology and the mind-numbing sluggishness of the movement in the game make it pretty frustrating to play in modern times. Don’t get me started on my experience of trying to climb that frickin’ beanstalk without saving every 2 seconds. Oh, and one more thing that I really should mention in hope that someone out there benefits! You can use the number keys for movement, which is something I really, really wish I knew before I started. Walking down the stairs from the cloud section  by pressing up then right then up then right then up then right (repeat about 100 times) to get near the bottom, only to figure out that pressing 3 on the number pad makes Graham walk down stairs diagonally was...well let’s say it didn’t please me. Considering everything, I’m going with 4. 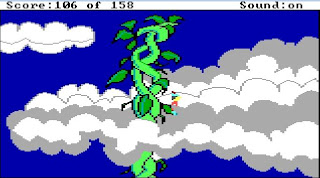 So...my reward for answering that impossible riddle is climbing a stupidly difficult beanstalk!

Story and Setting
When compared to the very interesting and rich story of Below the Root, King’s Quest is simplistic and cliché. But then it’s easy to argue that it’s supposed to be, with Roberta taking most of it from fairy tales and other stories that she’d read while growing up. The expanded story that came with later versions of the game goes some way to adding a bit more depth, but no story including leprechauns that like music so much that they all dance out of their abode at the mere site of a fiddle leaving their treasures to be ransacked, not to mention fire-breathing dragons that hide beneath wells and yet are afraid of water, is going to impress from a literary point of view. Oh well, I guess the game is supposed to be charming, not to mention playable by young children, so it’s possible that judging it from a literary standpoint is a bit unforgiving. The colourful and fantastical land of Daventry is a fine place for such a fable too, so I’ll give this a generous 4. 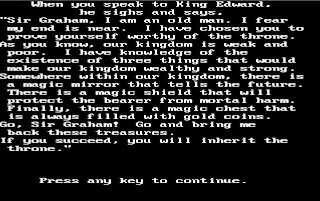 As tempting as inheriting the 48 screens of Daventry is, this speech is not particularly rousing.

﻿Sound and Graphics
King’s Quest was incredibly ambitious when it came to graphics. It wasn’t just that the game introduced animation to a historically static genre that made it so impressive. It also added simulated depth perspective, offering an admittedly crude three dimensional viewpoint to the player. The animation itself was adequate, certainly not awful, and the fairy-tale basis of the story meant the very bright colours fit the game thematically. However, I’m writing this blog in 2011, and it’s difficult not to snigger when looking at Roberta’s attempts at creating creatures such as the rat and the dragon, which look like they were illustrated by a four year old. As for sound, well there was quite a bit of effort put into making music that would take advantage of the PCjr, but audio technology for home PCs still had a long, long way to go before it wasn’t ear piercingly horrible. The majority of the game is silent, which is a blessing really. Sound and Graphics gets a 5 for historical significance. 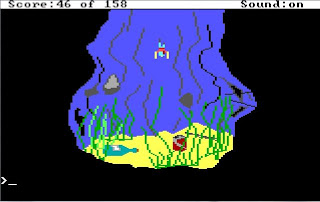 They really struggled to get items in proportion in the early games. That coke can is massive!

﻿Environment and Atmosphere
The way that Sierra made their early games wasn’t really conducive to feeling part of a larger world. The entire land of Daventry was limited to an 8 x 6 grid and contains around four inhabitable structures. They would eventually learn that it’s better to set up unpassable boundaries at the edge of the grid, hinting at a greater world beyond, than to have the screens wrap around like a globe with a surface area the size of a football field. Daventry does however have a magical feel to it, with bright colours and numerous references to fairy tales and mythology spread out across the land. What definitely would have added to the atmosphere was some decent quality music and background noise, but that’s a little much to ask of a game create over twenty five years ago. All things considered, Roberta and co did a decent job at creating a new world that would spawn several sequels and inspire countless other adventure games, so 6 it is. 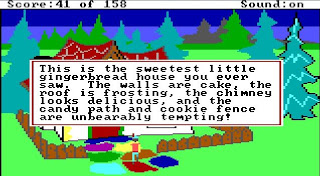 The gingerbread house is undoubtedly one of the cleverer parts of King's Quest.

﻿Dialogue and Acting
In any other context, the dialogue of King’s Quest could be considered extremely cliché and at times quite horrible. But there’s no doubt that a lot of it is merely reflecting children’s stories and fits the tone of proceedings well enough. The Leprechaun King cracks me up every time, simply getting up and walking out on his kingdom after his followers start to dance, allowing the player to take his shield and sceptre. It’s as though Roberta just couldn’t be bothered coming up with any dialogue that would allow Graham to retrieve the items, and killing a Leprechaun just doesn’t seem right, so she made him just…leave. It’s all a long way from future adventure games where dialogue is realistic, two way conversations that flesh out the story and branch depending on player choice, so I’ll have to be stingy here and give this a classification a 4. 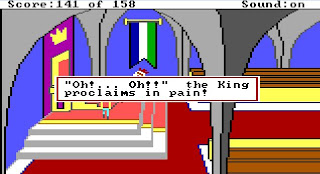 This is about as moving as the dialogue gets. 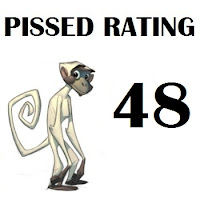 These numbers result in King’s Quest receiving a shockingly low PISSED rating of 48. That may rile some readers up a little given the game’s significance, but I must reiterate that I’m playing these games in 2011, long after Quest For Glory, Secret of Monkey Island, Grim Fandango, The Longest Journey etc. etc. Comparatively, it’s a much lesser quality game. I didn’t expect when I started this blog that Below the Root would be rated higher than King’s Quest at this stage, but the richness of the game world and the compelling mystery of it made it a more rewarding experience, so I’m cool with that.
Posted by The Trickster at 15:29