I’ve conquered Déjà Vu, but not without facing numerous frustrating moments of having no idea what it was I was meant to do next. Normally when getting stuck in adventure games, finding that next item / solution / clue means everything else falls into place, at least for a while. Not the case with Déjà Vu I’m afraid. I’d finally figure out how to gain entrance to a particular area, only for the feelings of excitement and triumph to dissipate once the items I subsequently discovered there really didn’t seem all that useful in progressing elsewhere. Thankfully I was able to cure my brain-cell melting condition once I gained access to Doctor Brodies’ office, meaning I no longer had a time limit to worry about. Once that element of the game was removed, I was able to spend as much time as I wanted organising my inventory and fully investigating every single area in the game. So much of the game is solved by examining everything and applying detective techniques, so feeling rushed isn't conducive to success. 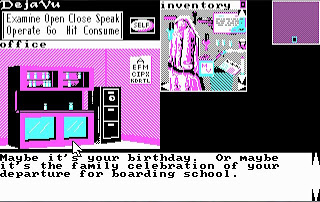 A E F M C I P X...um...K..D R...um...don't tell me...T...L?
Unfortunately, the time limit challenge was merely replaced by a monetary one, and I spent the last couple of hours of the game getting a taxi to a location (and therefore spending another three quarters) to see if there was anything I’d missed there, only to reload back to the taxi if I didn’t find anything. I’d hoped that I would be able to go back to the casino and win another bunch of quarters, but my efforts only resulted in lost money. In the end I finished with no quarters left and I’d given the last two taxi drivers twenty dollar notes to find they gave no change! Let’s just say that I was more than a little relieved to finish the game at this point as having to start again just to manage my funds better on the way through was not very appealing. Some would say that modern adventure games are too easy, with no way of dying and no way of getting in a position where the game is not able to be completed, but playing an old game where both of these are regular occurrences clearly shows why the genre had to evolve the way it did. 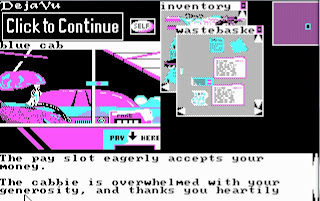 A $19.25 tip for a 75 cent trip! You bastard!
One unexpected positive to come out of the game was the way getting my memory back played out. Immediately after stopping the degradation of my brain functions, memories started to come back to me fairly rapidly. Some of these memories were just random events from my childhood, but others reveal pieces of what happened leading up to me being captured and drugged. Not only that, but re-examining items in my inventory uncovered new information that I simply couldn’t remember while affected by the drugs. It’s a plot revealing technique that would only work in a game based around amnesia obviously, but I have to say it was a pretty satisfying one. The only downside to the way it’s handled in Déjà Vu is that the piecemeal way the story is revealed left me confused and at times feeling pretty stupid. It eventually all came together, but I generally struggled to figure out what role each character had played in the plot and how on earth I came to be involved in the first place. I actually thought I might have been the killer for a while! Finding a note here or there merely added to the confusion, but I guess that’s the sign of a good puzzle based thriller rather than a bad one. 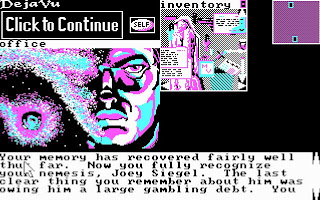 It's actually quite refreshing that the character you play in Déjà Vu has some serious flaws
Another major plus is that I did get to give the “nice looking lady” the punishment she deserved, and the solution (punching her in the face!) was available to me all along. Doing so only gave me some more useless items to fill my inventory with, but it sure felt good. In the end, I’m thrilled to have finished Déjà Vu! It was the most challenging of the games on the list so far (Below the Root was not too far behind) and while there are many things I found frustrating about it (which I’ll mention in detail when I apply a PISSED rating to it tomorrow), I found myself eager to solve the mystery and put all the pieces of the puzzle together. I’m almost certain the experience would have been more agreeable had I been playing the Windows 3.1 remake, as the improved visuals and sound would not only have been easier on the senses, they would have had a positive impact on the gameplay also. Anyway, I have my certificate from The Ace Harding School of Investigation and it’s a reward I feel very satisfied to have earned. 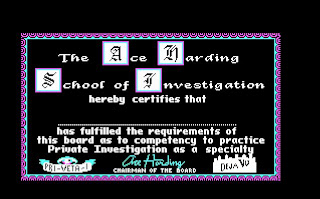 Straight to the pool room!
Posted by The Trickster at 21:58