Dare To Dream – Darn That Dream 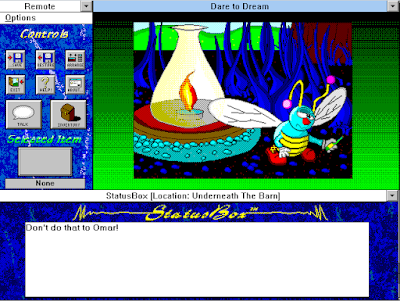 Last time I was stuck with nothing left to do. I had explored all of the rooms and exhausted all of my options, or so it seemed. After another bout of meticulous pixel-hunting I found not one but two new exits I had previously overlooked. And both were familiar to me. You see, I had already played through episode 2 of Dare To Dream last July right after having finished episode 1. I didn’t take many notes back then and whatever I did write down I lost in the meantime. Also, I didn’t get around to writing a blog post because, well, life got in the way. Life being my beautiful little daughter who was born last summer.

Now as she is slowly learning that nights are for sleeping I finally got around to picking up where I left off all those months ago. I always thought I had a pretty good memory. If that is true (and it’s probably not) it doesn’t apply to adventure games, I guess.
Read more »
Posted by Ilmari Jauhiainen at 00:00 4 comments:

Dare To Dream – In Search Of The Beast 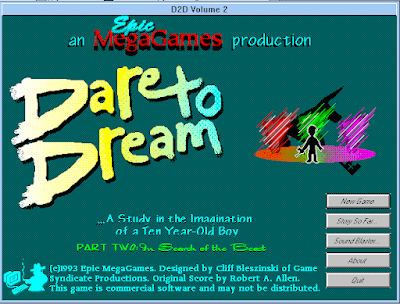 Did you miss me? I sure missed blogging.

It’s been a while since I tackled the first episode of Dare To Dream: In A Darkened Room. I navigated Tyler’s dream world, in that case an almost deserted nocturnal city with just a few wacky NPCs to interact with. At the end of the episode, I awoke and had an argument with my best friend Terry whether I had been trespassing in his dream or the other way around. The second episode, In Search Of The Beast, begins at Terry’s fort – right after the end of the first episode.
Read more »
Posted by Ilmari Jauhiainen at 00:00 9 comments:

Written by Sir Morpheus Kitami, Gru of Horror and Nimrod from the planet Terra, 17th Regulus in The Adventurers Guild of the United Hold of Planets

When I first started this entry, I felt like I had gotten off the wrong foot with The Kristal. Throwing a bunch of stuff the player doesn't understand all in the first 5 minutes is a surefire recipe to create a bad impression. I didn't get very far, I'm still within those first 5 minutes. The text-based dialog input could just be one mistake a very ambitious game made. But as I played more and more I realized that first impression was far nicer than it would end up being. Because it was so much worse. 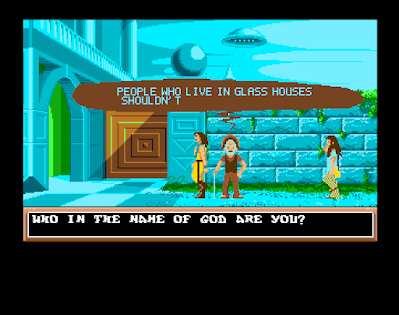 So my previous play session lasted all of 30 minutes and got me through the first part of the game, which is based on the first movie. I’ll just spoil some of the fun right now, and let you know that this second part took me about twice as long to complete. But was it more enjoyable because of this? Let’s find out

Like the first part, the second starts with some PowerPoint exposition. (I’m not including all the slides. There were a fair few) 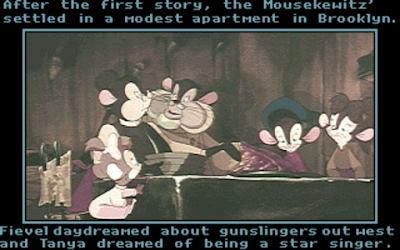 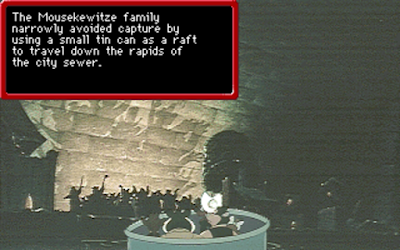 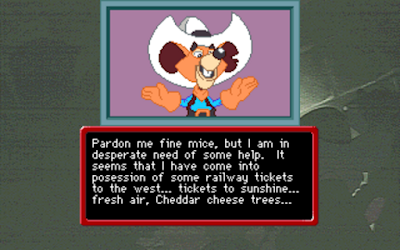 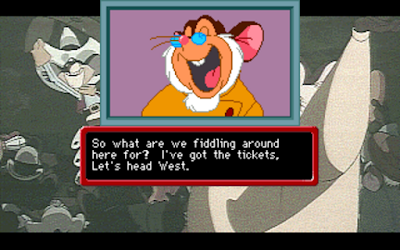 Right after, I’m dropped onto the westbound train.

Written by Morpheus Kitami
Some time ago, I think after Legacy's reign of terror, I noticed that there were a couple of mainline games that had yet to be claimed, Cosmic Spacehead and Innocent Until Caught, so I asked Ilmari if I could claim those, and he said sure. I thought I'd just get all those titles these companies did beforehand now, rather than when they come up on the games list. They are admittedly still a few games away.
Cosmic Spacehead was published by Codemasters, known at this point for Micro Machines, the Dizzy games and trash. None of the games they published were really adventure games. Dizzy sort of approaches that, but its comfortably far enough away to not be a concern. I feel like the games from the next company have far more validity to the adventure label and I'm not really about to play those now either. Or at least that's what I thought. I must have missed one title on my first passthrough, Necris Dome. However, Necris Dome is a case I don't really think fits too well with Codemasters, since the author, one Charles A. Sharp, did about 13 text adventures in the 1986-88 period, of which only one was published by Codemasters. I might dip into his titles, but not anytime soon.
On the other hand Innocent Until Caught was published by Psygnosis, who were kind of a big deal. While the company responsible for Innocent did nothing of importance here beforehand, Psygnosis...kind of did? Psygnosis, if you don't know, back during the days of the Amiga and Atari ST, was a game publisher with high production values. A combination of having staff artists who knew their way around the systems, having Roger Dean, best known for his album covers, do the cover art. From their founding up until around 1993 they were the company to beat if you wanted to have an impressive audio-visual experience with your game. Now, the part they sometimes missed was that they didn't always have the best gameplay to go along with that.
Ultimately, its not really a secret as to why Psygnosis hasn't been covered before, since they primarily dealt in action games. Some of these I understand have adventure elements, but they're not straight adventure games, its not that important. They did translate the French adventure game series Explora into English as Chrono Quest, but they missed the last game in the series and it kind of doesn't feel like Psygnosis in that regard.
Read more »
Posted by TBD at 23:00 18 comments: 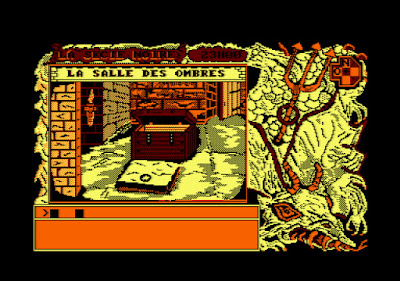 Happy new year everyone! We are back with La Secte Noire. Last time, I had just managed to infiltrate the base of the sect that had stolen the spell book defending my village. Checking the chest in front of me, I found a knife. It was time to go mapping.
Read more »
Posted by Ilmari Jauhiainen at 00:00 4 comments: