Gwydion Journal Entry 2: “So much has happened since I last wrote! I’ve travelled further than I ever thought possible, and I’ve made sure that nasty Manannan will never abduct young boys ever again. After learning a bunch of spells from his laboratory, I managed to turn him into a cat, giving me the time I needed to really explore this land. I found an Oracle in a cave who told me about my parents in Daventry, who just happen to be the King and Queen! Unfortunately, she also told me that Daventry has been invaded by a three-headed dragon, and that each year this monster demands the sacrifice of a young maiden. This year that maiden was to be my very own sister Rosella! Obviously I couldn’t let that happen, so I took a ship to Daventry, journeyed through the perilous mountains (that abominable snowman will forever give me nightmares!) and eventually used my new fandangle spells to defeat the dragon. I saved my sister in the process and met my mum and dad in their castle, making this unquestionably the best day of my life!”

I’ve completed King’s Quest III as expected, but there were a couple of difficult challenges that kept me at it for much longer than I anticipated. As I mentioned in my last post, I’d already collected the vast majority of items needed to cast all the spells found in the manual, so I set about casting as many as I could while Manannan was sleeping. Remembering that the way to defeat Manannan was to turn him into a cat, the first thing I did was create the Transforming Another Into a Cat cookie, crumbled it into the porridge I stole from the three bears’ house, and gave it to him when he woke up demanding food. With him out of the way, I kind of figured completing the rest of the game would be fairly straight forward. Not so! From here on in the game is really quite challenging, and not really in a good way I’m afraid. 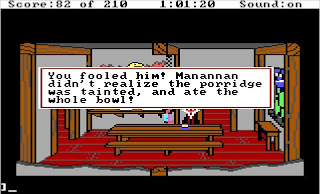 After meeting the Oracle, and therefore gaining my true quest and getting the final ingredient I needed to cast the last spell, I convinced the captain of a ship that had very conveniently made port at Llewdor to take me to Daventry. Of course, as is the way in stories like this one, these sailors turned out to be pirates, and I soon found myself held captive below deck. Getting above deck wasn’t an issue, and I gained plenty of information by spending time with the rats on the ship, due to having cast the Understanding the Language of Creatures spell. I could even make all the pirates fall asleep using my Causing a Deep Sleep spell, but this resulted in a Game Over message, as there was no-one left to steer the ship to Daventry. I must have spent around an hour and a half trying different things on that ship, but I couldn’t find any way to get off, or any items that might be useful. Obviously I’d figured it out previously as I’d finished the game years ago, but my memory wasn’t giving me anything useful. I was downright stuck! 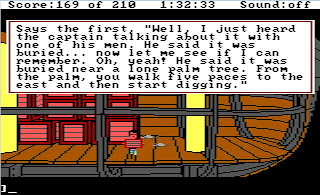 So I take it the rats have used the same Language spell I have?

The solution is going to sound ridiculously obvious! I simply had to wait (literally) for the ship to travel all the way to Daventry before making the crew fall asleep. This would have happened much earlier, had I not been killed several times through desperate experimentation, but since I’d been reloading over and over again, the fifteen or so minutes that needed to go by for us to arrive at the destination simply never occurred. It was mere chance that I walked away from the game for a few minutes in frustration and then came back to find a "Land ho, Captain" message on the screen. I can’t think of another adventure game that makes you simply do nothing for fifteen minutes as a solution to a problem, and I have to wonder how many players have torn their hair out in frustration, seemingly having nowhere to go and nothing to do. I’m sure that the feedback that Sierra got for these time based puzzles (not knowing that Manannan is ever going to leave the house at the start of the game can create a similar reloading scenario) made them decide not to run any future games in real time. 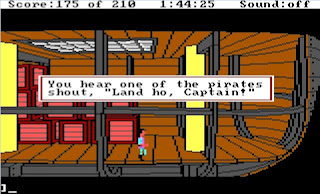 Ninety minutes of frustration could have been avoided by doing...nothing!

Further challenges awaited me both prior to getting off the ship (you have to jump!) and then in the mountain range that separated the ocean from Daventry castle. Without going into great detail, King’s Quest III went from seeming pretty straight foward to being frustratingly illogical half way through, a sentiment proved very nicely once the you find yourself confronted by the abominable snowman. On entering a particular screen in the mountains, the snowman charged at me and killed me. When I reloaded and entered the screen numerous times, eventually he just wasn’t there (a stupid technique I’ve been forced to use in all three King’s Quest games), but then he reappears with the same result on the very next screen! Finally I reached a screen where no matter how many times I entered it the snowman would kill me within seconds. I decided to try my Teleportation spell, only to find myself teleported way back to first mountain screen. 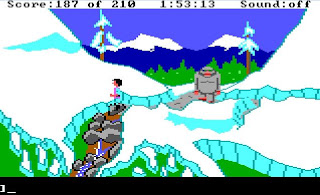 For a creature seen by few, the Abominable Snowman sure shows up a lot when I'm around!

It would have been very easy to assume that teleportation therefore wasn’t the solution to the problem, but as it turns out, the teleportation effect is random. On my second attempt, I was teleported to a screen I’d never been to before, with a message congratulating me on evading the snowman. This sort of puzzle can be extremely difficult to solve if you’re unfortunate enough to randomly teleport backwards multiple times. I wouldn’t blame anyone for giving up on that idea at that point, even though it’s the only way to progress in the game. Anyway, these frustrations aside, defeating the three headed dragon turned out to be pretty simple (use the spells I haven’t yet found a use for), and the game ending manages to be reasonably satisfying (tying part III to the first two games nicely) while being ambiguous (the game simply stops with King Graham’s feather hat being thrown in the direction of Gwydion and Rosella). The title of King’s Quest IV (The Perils of Rosella) gives me a good idea who catches the hat, and despite the flaws found in part III, I’m very much looking forward to playing a King’s Quest game I haven’t played through before. I’ll need to get through a few other games first though, not to mention apply the PISSED rating to this one. 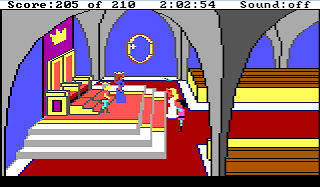 Email ThisBlogThis!Share to TwitterShare to FacebookShare to Pinterest
Labels: 1986, King's Quest III: To Heir is Human