Tass Times in Tonetown is for the most part an enjoyable adventure game, but I feel it’s my duty to highlight its flaws as much as it is to praise its highlights. My gut feeling is that it’s PISSED rating is going to be on the lower end of the spectrum, but we’ll see what happens…

Puzzles and Solvability
As I’ve already mentioned, the puzzles in Tass Times in Tonetown are actually pretty logical and enjoyable. When you enter an area and are killed because it's too dark to see, it’s logical to take a glo-burger with you next time. When the Daglets inform you that they originally wanted to play a concert at the tower but that their zagtone instruments disrupted the equipment there, it’s logical to take a zagtone with you when you try to free Gramps in the tower. As you can see, the items in the game are fairly ridiculous, but their use is in most cases obvious. It’s therefore unfortunate that the solvability of the game is made drastically more difficult by the many possible dead ends. It’s really very difficult to know when the game has become unfinishable, so I’m sure I’m not the first player to waste hours aimlessly looking for a solution that just isn’t there. For that reason I’ll have to give it a 4. 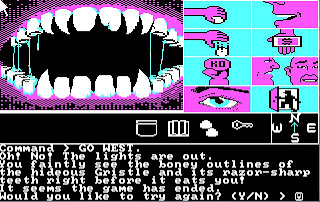 Having a glo-burger with you stops this from happening, but it wouldn't be the last time I'd see those teeth

﻿Interface and Inventory
The game successfully mixes both an interactive fiction text parser and a graphical interface, allowing the player to utilise whichever one suits their purposes at the time. I personally found the graphical interface too unruly to use properly, but that had more to do with the way I was forced to use it (mapping joystick movements to unused keys) than any issue with the game itself. I found the text parser to be adequate, but faced the same issues that I always do with games based on this technology. Ask the wrong question and you’ll get the wrong answer, meaning you can find yourself rejecting an idea that was actually correct, just because you didn’t use the right language. That being said, the ability to use the graphical interface takes this problem away, as language doesn’t come into it. The limited inventory is annoying however, particularly in those early stages of the game where you don’t know what you need and when you’re going to need it. I carried around items for nearly the whole game that I didn’t need until the very end, meaning one of my eight inventory slots was taken up permanently. When you consider that the picks (Tonetown’s form of currency) and the clothes you’re wearing take up three slots, it doesn’t leave much room for anything else. It’s a generous 5 for this category. 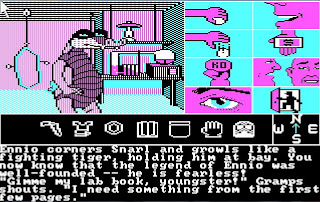 Oh now you want the book! Thankfully it's not one of the items I purposely dropped this time.
﻿
Story and Setting

The storyline of Tass Times in Tonetown was initially quite intriguing. Gramps is missing and the evidence suggests that he’s used a strange device to transport himself to another time or dimension. Going in after him really does give the player a sense of excitement, with a strange new world to explore on arrival. As the game goes on however, the story becomes thinner and thinner, with very little explanation as to why things are the way they are and what the player’s motivations are for their current task. Once you save Gramps, he tells you he has an important task to complete and that the player is welcome to assist, but he never explains what that task is or how to go about it. If you then try to talk to him again, he basically dismisses you and just tells you we need to deal with Snarl. Its times like this that just a few more lines of text would give the player more awareness of what they’re trying to achieve and give some direction. The ending is also very sudden, with everything wrapped up in an unsatisfactory way, leaving numerous unanswered questions such as “why are Gramps and Spot staying in Tonetown?”, “if Snarl is the combination of a pig, a raccoon and a crocodile, how did the mutation occur in the first place and how did Gramps know that sending him through the hoop would separate him?”, and “why did Snarl take Gramps prisoner to begin with instead of just killing him?”. This interesting yet incomplete story gets a 4. 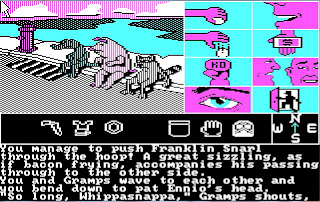 Everyone seems to understand that I'm going home and they're staying...except for me.

﻿Sound and Graphics
Sound and music in the game is minimal, although there are a couple of dodgy tunes that pop up at certain points, such as in Fast Freddie’s. At least whoever created the music knew not to use high pitched notes the way so many other early DOS games seem to, so it’s not too grating on the senses. Sound effects are limited to the occasional gurgle to inform you that a creature is nearby and various blips and blops. As for graphics, well once again PC players got the raw end of the deal, with the CGA palette 1 blues and pinks ruling the screen. It’s not completely out of place in this game, as the psychedelic colours kind of suit the oddities of Tonetown, but there’s no doubt that Amiga and Apple players had a more attractive experience. Animation is used rarely and crudely when it is, but it did give a sense of life to Tonetown, so I’m glad it was there. The game looks and sounds a bit better than Déjà Vu which I gave 2, so a 3 seems fitting. 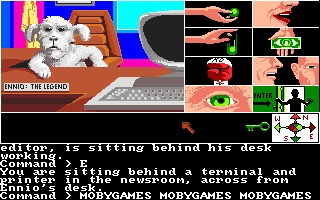 The game looks so much more tone on the Amiga!

﻿Environment and Atmosphere
This is where Tass Times in Tonetown does make a stand. The world of Tonetown and its inhabitants is truly bizarre and the atmosphere is consistently strange and fascinating. There’s no way that you can predict what you’ll find on the next screen when the world is filled with unusual creatures, floating telephones, burgers that glow in the dark, office corridors that never end and talking journalist canines, not to mention there’s an eye and an ear guarding a gate in the woods. The fact that you die suddenly and horribly at regular intervals gives Tonetown a constant element of threat, which also adds to the atmosphere. It’s probably this intriguing element that drove me to keep playing the game, even when the story started to diminish and the puzzles became unsolvable, so I’ll give this category a 6. 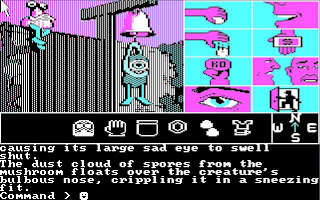 ﻿Dialogue and Acting
The dialogue and description found is Tass Times in Tonetown is certainly colourful (much more colourful than the CGA limited graphics). The unique language that the locals use not only acts as a reminder that you’re a long way from home; it also plays a role in at least one puzzle. When I first tried to talk to Nuyu, he responded with “far too linear – too Jonboi Waltune!” After reading about Jonboi Waltune in the newspaper and how he was made an outcast after his refusal look stylish, I realised Nuyu didn’t want to talk to me because of my appearance. After mimicking their style his response was “you look tone!” and he then hired me on the spot. There’s plenty of humour thrown in and the game’s self-referential tendencies always raise a smile. For all these reasons I’m given the game a 6 for Dialogue and Acting. 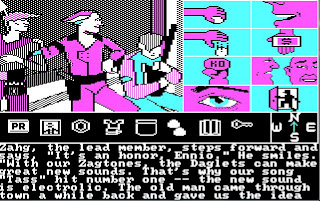 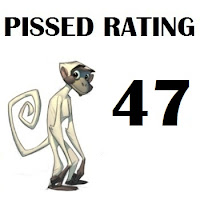 47 it is for Tass Times in Tonetown which puts in above The Black Cauldron and﻿ Déjà Vu but below the likes of King's Quest and Below the Root. This seems entirely fitting to me, so I'm fairly satisfied with the way the PISSED rating system is working. I kind of wish the scores were more distributed, but I assume that will happen over time. It's time to move onto another ICOM game and I really hope Uninvited shows some improvement over Déjà Vu, which used the same "engine". I may not be invited, but I'm going nonetheless!
Posted by The Trickster at 06:00