Roger Wilco Journal Entry 2: "Who would have thought? Roger Wilco, the former janitor of the Arcada, saves the planetary system from the Sarien’s evil plot. After barely surviving the skimmer journey to Ulence Flats, I then sold the skimmer for 30 buckazoids with a jetpack thrown in. I knew I needed a lot more money than that however, so I played the pokies and amazingly won enough cash to purchase my own spacecraft and a droid to go with it. I’d overheard some guy at the bar crapping on about an exploding planet in sector HH, so I figured that’s where the Sariens must be. I flew there and used my jetpack to get onboard their ship where I managed to enter the self detonation code into the Star Generator and escape in a shuttle before it exploded into a million pieces. I’m a hero on Xenon and they even gave me a golden mop as a reward! Best...day...ever!!!"

I’ve completed Space Quest I in just less than three hours, but there’s no way anyone playing for the first time without cheating would be able to do so. After the struggles I had in the first half, there were two or three more really very difficult parts to the game in the second half that my memory thankfully assisted in pushing me down the right path. Before I get into that stuff, my last post left off with Roger about to get in a skimmer and travel to Ulence Flats. It’s certainly worth noting that the way this journey is represented is through a racing style (well, dodging anyway) action sub-game. It’s the first example of an action section I’ve come across in an adventure game if you ignore Below the Root which was really a platform game with adventure elements. All you have to do is move the skimmer left and right to dodge rocks. If you hit around four or five of them, you’re dead. My first attempt to get through it met with a very quick end as I was running the game at the Fast speed setting. After setting it to Slow (I guess this is a form of cheating, but the section gets old really quickly at higher speed), I made it through relatively easily. 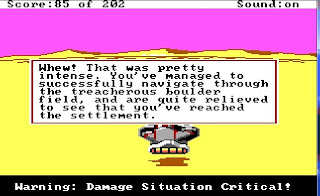 Most of the hits I took occurred when I tried to take screenshots for the blog. The things I do...

As soon as you arrive at Ulence Flat you are confronted by a salesman asking if you’d accept 30 buckazoids for the skimmer. If you accept this offer, I don’t really see how you could finish the game, but I’d love to hear from anyone that knows any different. If you decline his offer, he will appear later with another more inviting one, which is the 30 buckazoids plus a jetpack. I only remember bits and pieces from the first time I played the game, but one thing I do remember is that this is what caused me a lot of trouble. Since you need the jetpack a fair bit later in the game, it’s pretty unreasonable to expect any player that accepted his first offer to realise that’s where they made a mistake. As soon as the guy made the first offer, my instincts told me not to accept it, so I assume the pain I went through the first time round is still stabbing me somewhere deep in my subconscious mind. 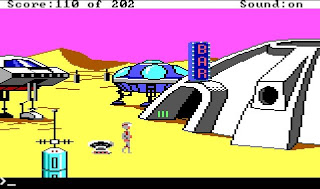 Ulence Flats: A bar, a space ship store and a droid store. What else could you need?!

The poker machine sub-game is done quite well, although having the ability to save after every big win kind of makes it only a matter of time before you get enough buckazoids to buy a spaceship and a droid. It’s typical of the game, given its penchant for killing Roger as many times as possible, that if three skulls come up on the machine, it instantly disintegrates you with a laser. It’s not the first case of gambling to appear in an adventure game, as I first came across it in Déjà Vu, with similar results (use the small amount of cash you have to win enough to last the rest of the game). Amusingly, different performers appear on stage in the bar where the poker machine is, including ZZ Top playing one of their recognisable tunes. The band actually sued Sierra for putting them in the game without their permission, as did Toys R Us after Sierra named the droid store Droids R Us. Interestingly, the game company clearly didn’t care, as they used both ZZ Top and Droids B Us (notice the small change) in the remake a few years later, and even made a parody of the Toys R Us mascot Geoffrey Giraffe. 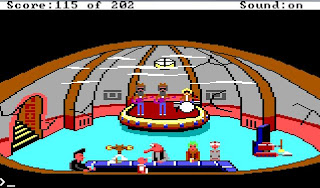 It's like the Cantina Bar in Star Wars, except with ZZ Top cranking out Sharp Dressed Man

Once you get everything you need and fly to the Deltaur, it’s only a matter of time before you save the day and are rewarded with the golden mop. Well, it is if you were fortunate enough to meet the scientist way back on the Armada to get the cartridge which contains the detonation code for the Star Generator and accepted the second offer of the salesman with the jetpack thrown in. Otherwise you’re screwed! What I’m about to describe to you pretty much sums up the tone of Space Quest. After entering the Sarien’s ship, which is called the Deltaur, you very quickly arrive in a laundry with a message telling you that footsteps are approaching. Given the dryer is the only item of any note in the room, the logical thing to do is to hide in it. A Sarien crewman walks into the room but doesn’t see you tumbling round and round in the dryer, so departs. When you get out of the dryer, you’ve miraculously changed clothes from your spacesuit into a Sarien outfit complete with helmet, meaning you can wander around the ship without drawing attention. 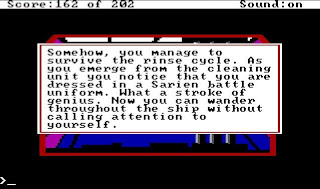 A stroke of genius you say!? It's not exactly the sort of thing you can plan to happen.

It’s completely silly stuff, but you just can’t help but have a good belly laugh and accept it. In the end that’s what Space Quest is all about. Entertainment! It certainly succeeds on that front, which is probably why the game and series gained such a huge following (it has sold over 200,000 copies, not including the many compilations it’s part of). It also must be why so many pushed on despite some really very nasty puzzles that would otherwise make it too frustrating to finish. I’m looking forward to playing the second game in the series, but not as much as I am to playing something I’ve never completed previously. Thankfully, the next game on the list is Black Cauldron, another Sierra game, but one I’ve never even seen. I’ll get straight into that as soon as I give Space Quest I a PISSED rating. Should be interesting... 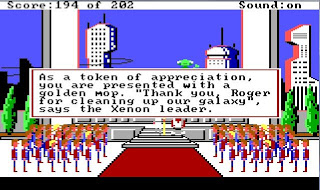