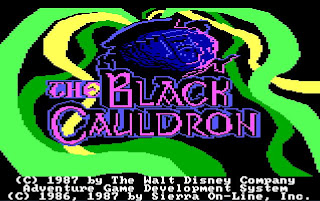 Writing black in pink makes it so much more menacing don't you think?

Settle down by the fire fellow adventurers and make yourself comfortable. I have a tale to tell that will undoubtedly bore a lot of you to tears, but there’s always the hope that one or two of you might indulge The Adventure Gamer’s tendency for overmeticulousness, not to mention his talent for using words that don’t exist. This tale begins way back in 1964, when an author by the name of Lloyd Alexander wrote the first novel in a fantasy series targeted at children. The series would eventually be known as The Chronicles of Prydain, and would be made up of five novels that can be considered a bildungsroman (that means they follow the protagonist from youth to maturity over their course for anyone quite reasonably assuming that was another case of me making a word up). The books would go on to win a few awards, and are often spoken about in the same sentence as C.S. Lewis’ similarly titled The Chronicles of Narnia. 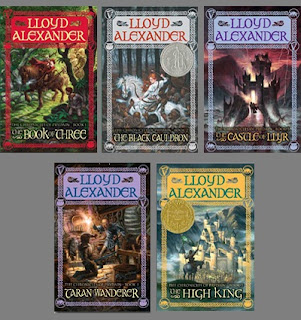 Seeing completed book series always makes me want to read them. Am I alone?

The series is thematically tied to Welsh mythology, in particular the tales of the Mabinogion. Based in the magical land of Prydain, the books focus on Taran Wanderer, the Assistant Pig-Keeper at Caer Dallben. Taran and his companions, Eilonwy (a princess), Fflewddur (a bard), Gurgi (a beast-like creature) and Doli (a dwarf that can go invisible), become involved in a battle to save Prydain from evil sorcerers. Unusually dark considering its audience, the Prydain Chronicles series is generally considered a classic in fantasy literature that contains many valuable lessons for children, while satisfying their hunger for heroism. The success of the novels didn’t go unnoticed by film producers and in 1985, Walt Disney Productions created an animated film based on the series called The Black Cauldron (the name of the second book). 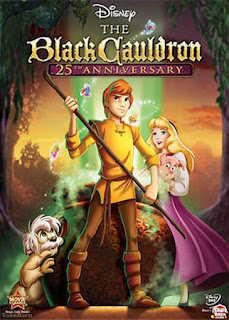 You know you're getting old when they're releasing 25th anniversary additions of movies you saw at the cinema!

The movie, which was directed by Ted Berman and Richard Rich, and included voice acting by the likes of Grant Bardsley, Susan Sheridan, Freddie Jones, Nigel Hawthorne and John Hurt, covered the first two novels in the series while taking other bits and pieces from the remainder. The production ran into trouble when company executives (and censors) found the content of the film to be much too violent and dark for children, so Disney was forced to make significant changes just prior to release. The chopped up finished product was heavily criticised on release for being confusing and for lacking the humour and wit of Alexander’s work. Costing $40 million to make and only recouping $21 million, Black Cauldron was an unmitigated failure, and almost bankrupted Disney in the process. This didn’t stop them from approaching Sierra, requesting that they make a game to accompany the film, or perhaps the wheels were put in motion long before the extent of the damage was known. 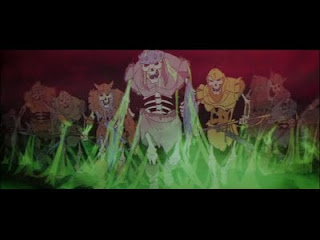 Either way, the man they wanted for the job was Al Lowe, and it wasn’t for the good work he’d done for games like King’s Quest II and III. Instead, Disney had been impressed by one of Al’s early games called Troll’s Tale, as it showed that it was possible to make an adventure game with no need for a text parser. Given the Black Cauldron game was going to be targeted mostly at children, it was important that the interface was as simple to use as possible. They gave Al complete access to the original hand painted backgrounds, the animation cells and the original Elmer Bernstein score, and asked that the game follow the movie closely with slight variations here and there to make it interesting for fans. While Al was certainly instrumental in the design and development of the game, he didn’t actually stick around until its completion. He and Ken Williams (co-owner of Sierra and husband to Roberta) bailed towards the end of the project, leaving Scott Murphy and Mark Crowe (this is where the Two Guys from Andromeda first worked together) to get it across the line. Perhaps they simply lost interest after the movie’s failure? 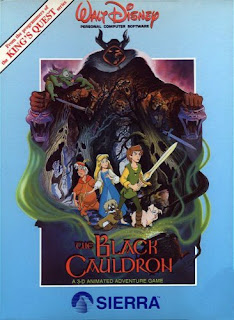 The game was released in 1986 on various platforms including DOS. I’ve downloaded a DOSBox version and managed to source a PDF game manual, reference sheet and a nice looking map, so I’m pretty much ready to go. Personally, I’ve never read The Chronicles of Prydain, and while I’m sure I saw the movie as a child, I can’t remember a single thing about it. I'm therefore relying on the game manual to give me the back-story of which the following is a summary (the actual backstory is eight pages long):

Dallben, a powerful enchanter, began searching for the prophesized hero that would eventually free Prydain from enslavement. One day he came across a battlefield where many lay dead, including women and children. He heard a cry from the trees where he found an infant whose parents must have been killed. He took the boy in and named him Taran. Like most boys, Taran longed for adventure, but Dallben instead gave him the title of Assistant Pig-Keeper, with his main responsibility being to look after the pig Hen Wen. As it turns out, Hen Wen has special powers that if used by the evil Horned King will assist him in finding the Black Cauldron, which will in turn give him the power to rule or destroy the world. As Taran, the player needs to make sure the Horned King doesn’t find Hen-Wen and ultimately, to destroy the Black Cauldron so he can never use it. 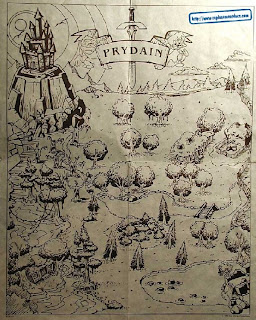 This is definitely the nicest map to come with an adventure game thus far﻿
Posted by The Trickster at 07:00

Email ThisBlogThis!Share to TwitterShare to FacebookShare to Pinterest
Labels: 1986, Introduction, The Black Cauldron