Journal Entry 1: “Well this day couldn’t get any weirder really. It all started when I went over to Gramps’ house to search for any clues that might help figure out where he’s disappeared to. I found the key to his lab hidden in a jar, so I decided to check it out for the first time. What I found was a very unusual hoop shaped device, and as soon as I turned it on, Gramps’ dog Spot jumped through and disappeared! Figuring this device must have something to do with Gramps’ whereabouts, I followed Spot through and was incredibly transported to a strange world called Tonetown! Not only that, but Spot suddenly goes by the name of Ennio, can talk, and is some sort of famous journalist around here! I’ve spent the last few hours walking around, checking out the town and talking to the residents. They all speak in a very strange way (they say Tass and Tone a lot!) and wear psychedelic clothes with sparkles and bright colours. They seem to use guitar picks as currency so it’s extremely fortunate that I picked some up in Gramps’ lab before coming here. Speaking of Gramps, the people here seem to know who he is, but he’s missing in Tonetown too! I guess I have no choice but to look for him here while I try to figure out how to get back home.”

Before I start talking about the game itself, I just wanted to shout out to HunterZ for helping me to get the game running properly through DOSBox. The game makes use of multiple inputs and while the only one you really need is the keyboard, it was bothering me that I couldn’t get any mouse response to make use of the graphical interface. I still can’t use an actual mouse (apparently you would have to use an old school serial mouse), but with HunterZ’s assistance I’ve managed to map some keys to joystick movements and buttons, allowing me to move around the screen and select the various actions. As it turns out, using these buttons doesn’t really add much benefit and I’ve resorted to typing commands with the text parser alone, but it’s nice to be able to click on things in the graphics window to see what they are rather than guessing with the parser. Unfortunately, the cursor is not very responsive when using the keys and it can be difficult to get it in the exact position you want, but I’ll manage. 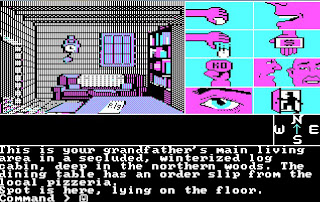 Somehow they managed to get the description, inventory, compass, action buttons and graphic window all on one screen.

I have to admit that I struggled for quite a while to get anywhere in the game, stuck in Gramps’ cabin with no picked up items and a locked door blocking my progress. Normally in straight text adventure games, all the objects in the room of relevance will be at least mentioned in the room description (which you get by typing LOOK). That’s not the case with Tass Times in Tonetown, so it’s important that you have a good look at the graphics window and request information on items you can see, not just the ones it describes. Eventually I found the key which was hidden inside a jar in the kitchen, but it took me well over ten minutes of scouring all four rooms in the cabin, trying to find anything of use. Once I got into Gramps’ lab and got used to the interface, I’m made pretty decent progress both getting into Tonetown and making my way to various locations. I’ve been mapping my progress in Excel, writing down things of note and items I’ve discovered / purchased on the way. 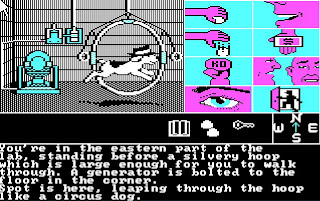 If you think Spot wearing a hat is weird, wait till you get to Tonetown and he starts talking to you

﻿As you can tell from the screenshots, the graphics are ugly due to the limited palette, but they’re certainly of a better quality than Déjà Vu. Also, while I stated in my introduction post that the graphics were entirely static, there is actually some animation on a fair few screens. It’s not all that impressive, but it’s a nice touch that makes the world feel a bit more real and tass (did I just say that?!). The Tonetown Times newspaper that comes with the game has been indispensable, not only because it’s given me an overall feel for the goings on in Tonetown, but mostly because it’s given me the names of its inhabitants that are required to talk to people. If you try a command such as TALK TO WOMAN in the game, you are informed that “we use first names in Tonetown” and therefore get no response. This form of copy protection is much more acceptable than King’s Quest III, where I was forced to spend a fair portion of the game copying down magic spells word for word and gaining stacks of points for it. 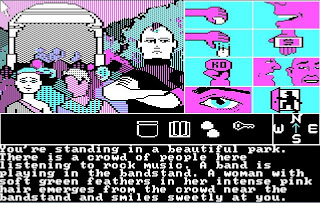 ﻿By far the biggest annoyance in Tass Times in Tonetown so far is how regularly my character is killed. I’ve been forced to save my game nearly every screen as I find myself randomly “thrown to Crocogators” or “tortured to death” by local business magnate Franklin Snarl. Often these attacks are preceded by warnings that my character hears someone muttering “I hate tourists”, so I’m starting to think I’m being punished for either spending too much time in each area or not fitting in with the general population of Tonetown. At the end of my first session on the game, I’d just purchased a typical Tonetown outfit from Tique, including a jumpsuit and hooplet, and I also noticed that I can get my hair done at Jamac Salon, so I’m wondering whether making myself look like a local will stop the constant death screens. I hope so, as being killed off every couple of minutes is really starting to get on my nerves, and makes progressing in the game a struggle. 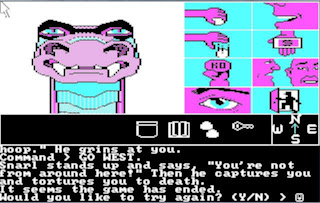 That's a little harsh isn't it?!

﻿Despite this annoyance, I’m very much enjoying Tass Times in Tonetown so far. It’s definitely an intriguing little mystery and I feel like I haven’t even touched the surface of this bizarre world I’ve been thrust into. Having Ennio the Legend along for the ride is a cool little touch and his warnings and background information that’s available on certain screens makes what would otherwise be a daunting environment a little less intimidating. One final word of warning for anyone that wants to give the game a shot! I highly recommend using the actual save game slots rather than just using quicksave every time. I’m going to have to start the game again this evening (not a big deal at this point) because every time a reload my quicksave, I’m confronted and killed by Franklin Snarl as soon as the screen comes up. It’s a lesson I’m glad I’ve learned this early in the game as losing the only save you’ve got a couple of hours in would be far from ideal. Have a tass and tone day and Ennio and I will report back when we’ve uncovered more secrets of Tonetown. 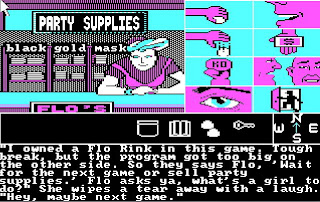 Don't you hate it when the game gets so big you have to sell your Flo Rink!
Posted by The Trickster at 10:31

Email ThisBlogThis!Share to TwitterShare to FacebookShare to Pinterest
Labels: 1986, Tass Times in Tonetown