Hmmmm...I’m starting to realise that a lot of these early Sierra games are going to have very similar sounding rating posts. I guess that can’t be helped, as they really do share a lot of the same strengths and weaknesses. I’ll try not to bang on about the same things every game and instead focus on the things that are actually notable and worth discussing.

By the way, there have been a couple of suggestions on how the PISSED rating system might be improved. Obviously if I’m going to change anything, I wouldn’t want to wait too long, as I’d need to make changes to the games I’ve already completed. I’m reasonably ok with how it’s going so far (the games are all scoring pretty similar, but then they are in most cases pretty similar), but I wouldn’t be opposed to tinkering with it if others feel it needs it. Please discuss here.

Puzzles and Solvability
There’s no denying it. Space Quest has numerous puzzles that require trial and error and a good dose of luck, rather than any sort of logic or even lateral thinking. I won’t go into details as I’ve covered it all in the previous posts, but acquiring the data cartridge, the piece of glass and the jetpack, all rely on the player either being in the right place at the right time or making an illogical decision. If luck doesn’t go your way, then you’ll be none the wiser, and find yourself hunting for solutions that are simply not there later on. As Andy_Panthro commented, Sierra used these dead ends as cheap ways to lengthen what are otherwise very short games, but Space Quest is the worst offender so far. It pains me to do it, but I have to give the game a 4 for Puzzles and Solvability. 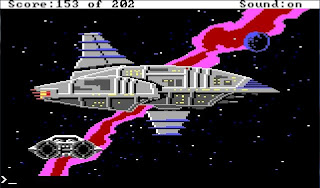 For many, this would have been the moment they realised they were missing something

﻿Interface and Inventory
Space Quest uses the stock standard Sierra AGI interface and inventory systems. From an inventory point of view, it’s surprising how few items there actually are to pick up in the game. Unlike King’s Quest games where you spend most of your time item hunting, the majority of time in Space Quest is spent just trying to figure out what it is you need to do next. As for the interface, well the parser technology is identical to previous games and thankfully the “look around” command pretty much gives you all the information you need this time around without having to study every item on every screen. It’s hardly worth discussing the interface when it comes to the short action and gambling sections. It’s all pretty straight forward and intuitive (ie. left goes left, right goes right). There’re no improvements to be found in this category so I’ll stick to the 5 I’ve given the last two Sierra games. 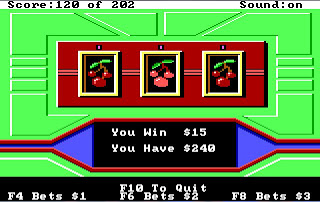 Gambling is becoming a regular feature of the genre. Was it a casino marketed scheme?!

Story and Setting
This is where Space Quest does start to make up some ground. So far the graphic adventure games were almost exclusively played out in medieval settings, with Déjà Vu’s noir mystery being the obvious exception, so the science fiction setting that Scott and Mark went with was certainly refreshing. Describing the plot in one sentence makes it pretty obvious how cliché it is: an unknown and not particularly special young man becomes an unlikely hero by stopping an evil race of beings from destroying the planet. However, it’s the comedy and tongue in cheek style of the writing that makes Space Quest utterly enjoyable despite its formulaic nature. It never takes itself too seriously so the player doesn’t either, and its numerous references to Star Trek, Star Wars and pop culture will touch the heart of most prospective players. I’d consider a 7 if it wasn’t for the fact it pretty much clones Planetfall, so will go with 6. 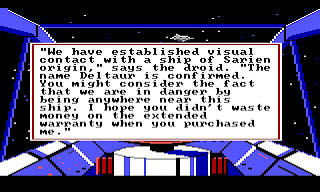 Sound and Graphics
Not much to say here. The sound effects are once again minimal, with some bordering on painful (I’m pretty glad the spaceship alarm stops quickly on the Arcada for example), but the music is not too bad. Unlike King’s Quest III which has completely unmemorable tunes, Space Quest has a very Star Wars feeling theme song, and even brings the Blues Brothers and ZZ Top into the bar scene. The music is clearly intended as parody and adds to the entertainment, so that’s a plus. The graphics are basically King’s Quest with colours more suited to the science fiction genre. Most of the greens and yellows are replaced with blues and reds, but the quality of the graphics and animation is unchanged. It certainly doesn’t deserve to be any higher than any of the previous games, so sound and graphics gets a 5. 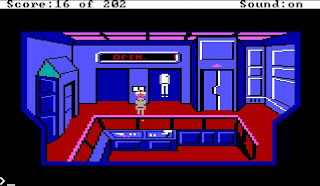 If science fiction is rated by how many panels and consoles in contains, Space Quest rules!

Environment and Atmosphere
Along with the comedy, this is where Space Quest shines. The environments perfectly encapsulate the space operas fans of TV and movie series such as Star Trek and Star Wars would expect. The Deltaur and Armada spacecrafts with their sliding doors, airlocks and panelled walls are great and the Ulence Flats location is suitably alien and dangerous. Speaking of danger, it becomes clear that death awaits you at regular intervals, which really adds to the atmosphere of the game. Basically the result is a game world that feels exciting, fun and treacherous, which is a credit to the designers. The only game I’ve played so far that had a world so effective was Below the Root with its passive environment and subtle spirituality, so I’ll match that games 7 here. 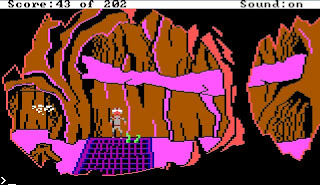 They're coming out of the goddamn walls!!!!

Dialogue and Acting
The King’s Quest series certainly has its humorous and parodying moments, but Space Quest really took a big step up in this area. This is not achieved through character interaction, as there’s very little of that to be found in the game (probably less than all the other games I’ve played so far apart from Déjà Vu), but through the location and item descriptions, and the effects of your actions that in most cases result in an untimely death. Every time you die, the game mocks you, and it reminds you of your lack of heroic traits throughout, as if assuming that you’re destined to fail. The adventure game genre is a long way from really making great use of this category, but Space Quest is the pick of the bunch so far for being consistently entertaining and humorous. I’ll give it a 6. 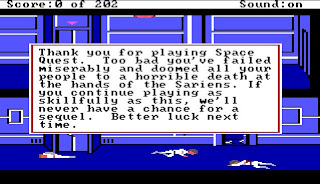 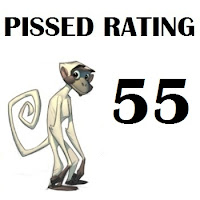 The first Space Quest game overcomes a dodgy P rating and sits on top of the leaderboard after six completed games. This might raise the discussion about whether things like Puzzles and Solvability or Story and Setting should get more weighting than some of the other categories, but somehow it feels right that Space Quest scores higher than the rest so far. Still, it could have really broken away if not for those illogical dead end causers, as it’s a thoroughly enjoyable game that deserves its esteemed place in adventure game history.
Posted by The Trickster at 07:00