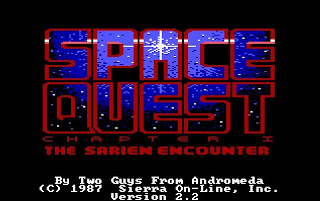 Finally, after playing through three King’s Quest games, I get the chance to play one of Sierra’s other classic adventure series...Space Quest! Before I get into it I’ll state up front that I’ve completed the first three Space Quest games previously, so I unfortunately won’t be approaching them as a first timer. As with King’s Quest however, I haven’t played them for over a decade, so I don’t expect to completely waltz through them. For some reason, I can remember parts of the first and third games, but nothing at all about part II. I assume that’s due to the graphical improvement that took effect for part III making it memorable, but we’ll see whether the part II void means anything in the coming months (it’s possible I played it during my early nineties alcohol discovery period). Anyway, what’s Space Quest all about and how did it originate? 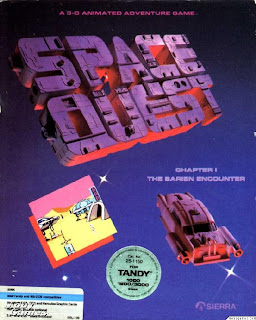 It was customary for Sierra employees to begin their game development careers working on King’s Quest games with Roberta Williams before gaining the opportunity to try their hand at producing their own franchises. Scott Murphy (programmer for King’s Quest II & Black Cauldron) and Mark Crowe (graphics for King’s Quest II & Black Cauldron) were the first to take the plunge. To this point, Sierra seemed to be stuck in the mind frame that adventure games needed to have a medieval setting, but Scott and Mark were determined to break the mould. Their game would be purely science fiction, would have a large dose of comedy injected into it, and the main character would begin the game as a lowly janitor. To prove that their idea had legs, they created a four room demo and pitched it to Sierra co-founder Ken Williams. He obviously liked what he saw and gave the duo, which would soon be known as the Two Guys from Andromeda, the green light. 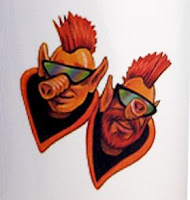 The Two Guys from Andromeda

The back-story goes something like this: The sun of the planetary system known as Earnon is slowly dying, causing the orbiting planets to grow cold and the food to run out. Scientists on the planet Xenon have developed a device called the Star Generator which they plan to use to convert a lifeless nearby planet into a new sun. The device is held on the starship Arcada, which is where our lowly janitor is situated. Unfortunately, space pirates called the Sariens catch wind of the Star Generator and immediately invade the Arcada, intending to turn the device on Xenon itself, thereby destroying all life there, and taking full control of Earnon. While the Sariens board the Arcada and begin killing the crew, the janitor (named Roger Wilco as a reference to Roger, Will Comply) is having one of his customary snoozes in the broom closet and avoids being executed. You begin the game right after Roger exits the closet to find destruction all around him. 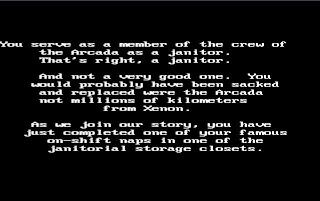 You get a good feel for the humour of Space Quest right from the intro. Infocom's Planetfall was clearly an influence on Space Quest

Utilising the same technology as the King’s Quest series meant that Space Quest was easily accessible to fans of the former, with all the delights and limitations that the AGI engine brought with it. Once again the graphics are limited to sixteen colours and sound is restricted to the PC’s internal speaker. After King’s Quest III had introduced strong copy protection through the use of spell recipes that were only available in the manual, Sierra continued the practice by having certain required coordinates and codes only found in the Space Quest manual. Just to be clear, I’ll be playing the original game, albeit the slightly improved version 2.2 that was released in 1987, not the 1991 remake that included 256 colours and soundblaster support, not to mention a point and click interface. I think I’ve crapped on enough, so it’s time to put my space suit (or is that a janitor's suit) on and save the universe! 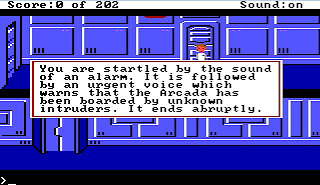 It's time to save the universe!
Posted by The Trickster at 16:54