Journal Entry 2: “I did it! Well, I should say “we” did it! After much detective work, Ennio and I rescued Gramps from an otherwise empty office block where Snarl had him locked up. The three of us then set about finding Snarl with the intention of putting an end to his villainous ways. It certainly wasn’t easy getting into his house, given the strange creatures that blocked the entrances, but we eventually found a way in and confronted him. Ennio cornered him while Gramps got the hoop working (I’m not sure why Snarl had one but I was sure glad to see it) and then I finished him off with some electrical creatures I’d found in the woods called Red Devils. We then pushed him through the hoop, sending him out of Tonetown and into my normal dimension. I shed a few tears and said goodbye to Gramps and Ennio before I also stepped through the hoop and went home, but I had to chuckle when I found a pig, a raccoon and a little crocodile sitting on the side of the road looking forlorn. Apparently Snarl was a combination of the three, which I guess explains why he was so damn ugly!”

Yep, Tass Times in Tonetown sure is a strange game. From start to finish not much of what goes on gets any real explanation and I found myself shaking my head at the sheer wackiness of it all quite often during the five and a half hours it took me to complete it. Before I talk about my more recent experiences with the game, I wanted to overturn a comment I made in my previous post. I was fairly certain at the time that the game required the player to pixel hunt in the graphic window instead of being able to purely rely on the text descriptions to figure out what items are relevant. I came to this conclusion prematurely, after struggling to find the first item I needed in Gramp’s cabin due to it not being mentioned anywhere in the text. After a couple of hours play without any other instances of this happening, I decided to play through that first scene again to see whether I just missed something.  As it turns out, I’d simply failed to notice the hint that was right in front of me all along, which is that Spot was “barking at the kitchen counter”. I hadn’t yet figured out the importance of paying attention to Spot / Ennio, and if I had of simply typed look at kitchen counter, I wouldn’t have had to click on every item in every room trying to find something of use. In summary, there is no pixel hunting required to complete Tass Times in Tonetown! 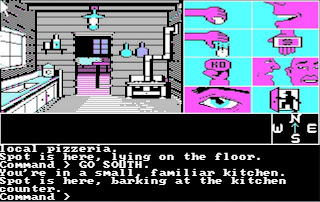 I can't really blame the game for my lack of observation skills can I!

So what did I think of the game? I’m afraid that’s not an easy question to answer, as it really is a game of negatives and positives. On the positive side, the game is quirkily charming, quite funny at times, and the mystery is generally solved using a logical approach, despite the craziness going on all around you. At the end of my last post, I was thinking that if I can make myself not look like a visitor to Tonetown, then Snarl would stop killing me due to his hatred of tourists, and I was completely right. Lots of times I found that my intuition of what to do was right, which is a good sign that the game’s puzzles are fairly logical. Strangely enough, I went to bed last night after getting a bit stuck, only to wake up in the middle of night knowing exactly how to proceed (I’m sure my wife loved me waking her up to tell her that I just needed to take a Blobpet with me from Snarl’s pet store to the woods where the pile of soil was too hard for me to dig through with my bare hands). Another positive is the useful interaction between Ennio and the character, warning him when he should be careful and hinting when he should take note of something. It’s certainly the first example of companions actually being useful, which is particularly refreshing after playing The Black Cauldron with its “well, they were in the book, so they have to be in the game” characters. 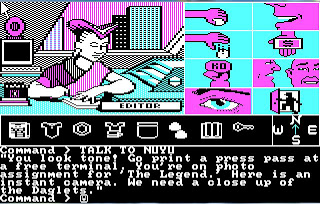 Hired for my good looks! Not surprising I guess (ahem)...

Unfortunately, the game does have its fair share of negatives, not least of all the inventory size limitation. Given there are quite a few items to be found in the game and the non-linear approach means you can pick up any of them at any time, limiting the inventory to eight items is rather irritating. As I was playing the game for the first time, I had no idea whether I would ever need to use an item more than once, but I was quickly forced to drop anything I’d already used to make room for ones I hadn’t. It turns out that in almost every case, the use-it-once-and-drop-it approach was correct, except when I found out at in the finale that the very first item I dropped (the book I found in Gramp’s lab in the first scene which hinted at where he’d disappeared to) was required a second time to finish the game. Items you’ve dropped are easily visible in the graphics window and also mentioned in the text description, but remembering where you dropped a particular item can be quite a strain on the brain. Limiting the inventory in this way really forces the player to either restart a couple of times, using the knowledge you’ve gained to only pick up the items you need early on before disposing of them, or to choose one location to dump all used items into in case you’re later required to go back and get one of them. 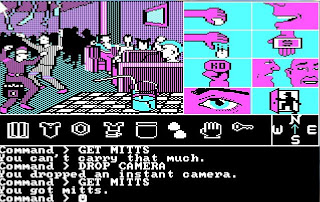 Oh yay, some mitts! I'll just leave my camera here on the dancefloor so I can carry them

Undoubtedly the biggest flaw of Tass Times in Tonetown is the dead ends that arise due to doing things in the wrong order. The game is actually really, really short (if I played through it now from start to finish, I reckon I could do it in around twenty minutes), but it took me five and a half hours to complete it because I got stuck in situations where , unbeknownst to me, I was never going to be able to finish it. At around the three hour mark, I’d mapped every screen, was pretty certain I’d collected every item, and had saved Gramps. The only thing left to do was to find Snarl and defeat him some way, and my only two avenues were a locked gate in the woods and a well near the town. Every time I entered the well, I was killed by “mad creatures” immediately, and I simply couldn’t find any way to get through the gate in the woods, despite taking out the guards. After trying every avenue I could think of, I restarted the game, and remembering that I had actually successfully entered the well earlier without being killed, decided to focus on getting through there prior to saving Gramps. This decision eventually lead to victory for me, as saving Gramps prior to entering the well, getting onto Snarl’s property, and unlocking the gate from the inside, results in an unfinishable game. Now that I have finished, I can see several other ways that the game could be made unfinishable, which I avoided through luck alone. 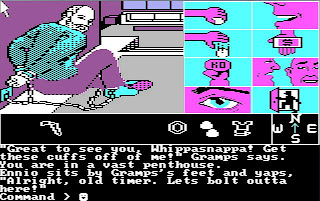 What he should have said is "Don't save me now you idiot! You haven't unlocked Snarl's gate from the inside!"

Taking the above pros and cons into consideration, I think the PISSED rating system is unlikely to be particularly generous when it comes to Tass Times in Tonetown. Strangely enough though, I still quite enjoyed the game, and would recommend it to anyone that finds pleasure in interactive fiction, more so than fans of Sierra or Lucasarts style adventure games. If the dead end I banged my head against futilely all morning hadn’t left such a bad taste in my mouth, I’d probably be pretty positive about the game overall. As it is, I can’t ignore it, and will have to judge the game accordingly, which I’ll do tomorrow. 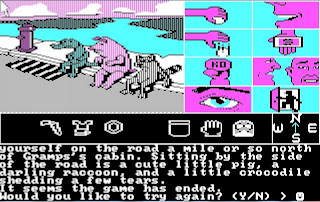 Email ThisBlogThis!Share to TwitterShare to FacebookShare to Pinterest
Labels: 1986, Tass Times in Tonetown