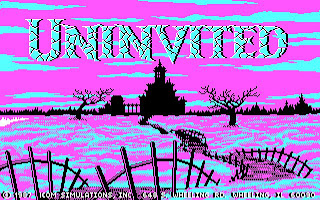 Uninvited is the second game to be released on ICOM Simulations’ MacVenture engine (known as PCVenture when ported to the PC). It was originally released for Apple in 1986 before being ported to numerous platforms, including DOS in 1987. The first MacVenture game was the noir influenced Déjà Vu: A Nightmare Comes True!!, which was the fourth game I played for this blog. That game was a relatively enjoyable adventure game, but was marred by low quality graphics and sound, and an ambitious yet frustrating inventory system. Of particular note when discussing this series of games is the fact that they are the first examples of what would come to be known as point and click adventure games, removing the text parser from the experience (although Déjà Vu did require it in small doses) and allowing the player to control everything with the mouse. This would become the standard for adventure games in years to come. 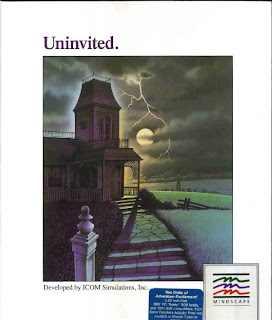 Uninvited moves away from the world of crime and murder, and instead puts the player into a haunted house situation. It’s apparently the only of the four MacVenture games to take place in the present day. I have to admit that the horror theme is much more in line with my personal tastes (while they’re both classics, I’ll watch The Exorcist over The Godfather any day), so I’m looking forward to Uninvited more than I probably should when I consider the low rating I gave Déjà Vu. It may also assist that this time I’m going in having had previous experience with the engine, so I shouldn’t have to spend much time trying to figure out the mechanics of the game or fighting DOSBox, and can instead focus on the puzzles and the story as it unravels. The screenshots I’ve seen look suitably creepy, even in the dodgy CGA colour palette. Speaking of the low quality graphics, it’s worth clarifying that I’m going to be playing the 1987 DOS port and not the 1991 Windows 3.1 remake, as tempting as that is. 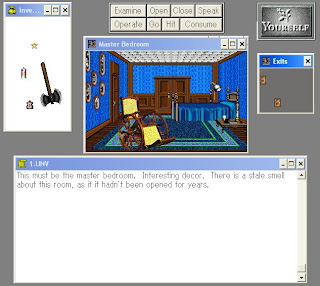 People who play in 16 colours are soft!

I’ve found the game, downloaded it and tested it (including the save and load features), and also got my hands on a PDF version of the manual and quick reference guide. A quick skim through both suggests there isn’t anything of note that has changed between games when it comes to the interface, which means that wearisome inventory system is still there. Here’s hoping there isn’t another panic inducing time limit to contend with this time, and perhaps less of a focus on pixel hunting, which is far more challenging when the CGA colour limitations make everything blur together in a swirl of pink and blue. Anyway, there’s no point sitting here worrying about what might or might not be. It’s time to see what Uninvited has to offer. If you don’t hear from me for more than a couple of days, then I guess I didn’t make it out of the house. Whatever you do, don’t come in after me! 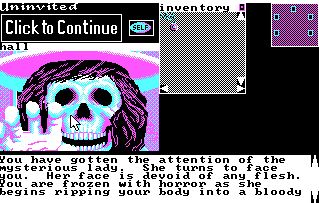 Aaaaaaaaggghhhhhh.....(gurgle)
Posted by The Trickster at 06:00