Game 6: Space Quest I - The Hilarity of Death

Roger Wilco Journal Entry 1: "What a shitty day! Just when everything was finally going to plan (cruisy job, free travel), I find myself caught up in some villainous scheme having to save the planetary system. I don’t have much idea about how this Star Generator gizmo works, but these Sariens clearly wanted it. They’ve killed everyone on the Arcada to get it, but somehow I managed to get away in an escape pod. Now I’m stuck on some strange planet called Kerona, where I have to avoid death at every turn. Thankfully I’ve just made contact with some aliens that seem rather friendly, and after killing a really ugly monster called Orat, they’ve offered to assist me with transportation. It’s a good thing too, as if the data I took from Arcada is correct, the Sariens are going to use the Star Generator to destroy Xenon and all its inhabitants. I don’t know what I can do to stop them, but I have to try! Damn it...I don’t get paid enough to do this!"

I’m ninety minutes into Space Quest and really enjoying it. My previous experience with the game is definitely helping me get through it pretty quickly, but that’s not to say it’s easy. In fact, there have already been two instances where I’ve been totally stuck, and had to restore back to earlier save games, realising I’d missed something. The first thing to mention is that the game jumps from location to location much quicker than any of the King’s Quest games, so there really isn’t any need (or benefit) to drawing a map, despite the manual suggesting you do so. There are only a handful of screens on the Arcada before you rocket off to Kerona, where there are only a handful of screens before you go underground, and so on. For this reason, the game feels a lot more linear than the King’s Quest games where you spent the first hour wandering the land looking for items, but that does allow the plot to play out in a more satisfying fashion. 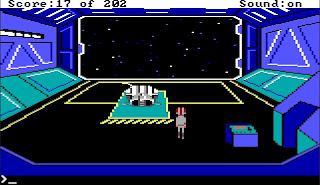 It's no Tie Fighter, but it will do

Apart from the science fiction setting, the main difference between King’s Quest and Space Quest is the comedy. Nothing is taken seriously in Space Quest and I find myself chuckling regularly at the stupidity of it all. The Two Guys from Andromeda understood very well that adventure games can be frustrating, particularly when your character dies every few minutes, so with this in mind they put a lot of effort into making the player’s failures enjoyable. Whether it’s being bounced like a basketball and then eaten by Orat or blown into a thousand bits by a Sarien Spider Droid, the deaths and the game’s mocking messages that come after them are both grotesque and funny. Even though I’ve played the game before and know how to avoid the majority of places and things that can kill Roger, I’ve still died plenty of times already, including around thirty seconds after starting. It’s credit to the developers that you not only happily restore and try again, but you do so with a big smile on your face. 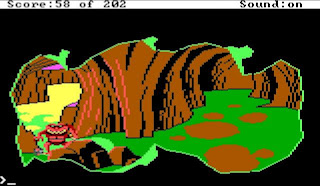 Orat may not be pretty, but he sure got game!

The game does however suffer from a lot of the same flaws that marred the King’s Quest games, but that’s not surprising given it’s using the same technology. That being said, the main issues I’ve had so far have been to do with game design rather than the technology itself, suggesting the creators didn’t think these elements were broken to begin with. Of particular note, the overly difficult line of sight challenge that made finding the key on the closet in King’s Quest III so difficult returns in Space Quest. If you “look at pod” after crashing on Kerona, but are standing on the left or right side of it, you get a message saying “the pod seems to be semi-destroyed”. Yet if you’re standing directly in front of it when you type the command, you get “A glimmering catches your eye. Upon closer inspection you see that a piece of highly reflective glass has broken out of the pod window”. 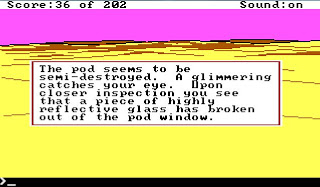 Look, I know it makes sense that I wouldn't see it from the side, but...

Considering you absolutely need this piece of glass to get through the underground section, and have no way of returning to the surface once you’re down there without it, that’s a pretty harsh puzzle that surely would have caused a few Rubik’s Cubes to be thrown across the room in disgust back in the late eighties. One of my other Sierra pet hates that returns for Space Quest is the way NPCs appear randomly when entering screens. It’s fine that Sariens are sometimes there to shoot you in sections of the Arcada while other times they’re not, but having a character that you actually need to talk to (the dying scientist in the library) appear only occasionally gives luck too much of a place in a game that should be based around problem solving (and the occasional use of reflexes). I realise that you don’t have to get the cartridge to finish the game (I don’t think I ever saw the scientist the first time I played the game), but it sure makes it easier and less confusing. 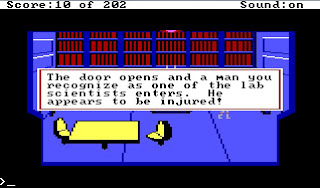 While on that subject, I mentioned in my introduction post for the game that there are combinations and codes that are only available in the manual. Well, as much as I was led to believe that was the case by articles on the net such as Wikipedia, that hasn’t turned out to be the case. I was surprised to find that there’s nothing of the sort to be found in the manual, and that everything I’ve needed (including the name of the cartridge and the Star Generator activation code) can be found in-game. I seem to recall needing coordinates when travelling through space later in the game and I can only assume I need to keep an eye out for those too. Anyway, I’m keen to get back to it. I’ve just been given a skimmer by the aliens on Kerona and am about to travel to Ulence Flats to try to get myself a spaceship. If all goes well, I’ll be back tomorrow with a Won post. Even if that’s not the case, I’m sure I’ll have a few humorous disasters and death scenes to report on. 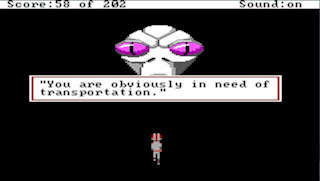 You are obviously in need of a body of some sort.
Posted by The Trickster at 11:23