Journal Entry 1: “I’m writing in this journal in an attempt to keep my sanity. Perhaps I’ve lost it already!? My kid brother and I had a car accident in the middle of nowhere. I swear I was just trying to dodge a shadowy figure on the road and ended up hitting a tree...hard! When I woke up, my brother was gone, and then I barely managed to escape the car before it exploded. To make matters worse, I entered the only house I could see to try to get some help, and now I’m trapped here! There’s evil in this place, and whoever lives here has been dabbling in dark arts that no-one should mess around with. Pentagrams, books of magic, voodoo stuff...and I’m...seeing things! Ghostly figures keep appearing out of nowhere and some bizarre creature keeps dashing in and out of my view. I still can’t find my brother, but I can only assume he came in here too. I fear if I don’t find him soon it will be too late, so all I can do is read the various parchments left around this damn place to try to figure out what the hell is going on and where he might be.”

Well I guess it had to happen eventually! A few of you have suggested that Uninvited is a challenging game, and one that I’ll more than likely struggle to get through without a walkthrough. I’ve already played the game for over two hours and I haven’t managed to get anywhere at all, so I fear you’re right. All I’ve done so far is checked out all the rooms I can get into without dying and examined all the items within each of them, picking up the ones that seem like they might be useful. I’ve mapped everything out in Excel along with where I found each item, but I’ve not yet managed to find a use for any of the items I’ve found or come across anything that I can actually solve. The only real hints I have to go off are in the various journals, scrolls and books that I’ve picked up, but they don’t give me a heck of a lot to go off. The large book I found in the library contained definitions such as Instantum – sudden and momentary, Projectum – propulsion of an entity etc., and then was able to apply these definitions to a scroll, but all I ended up with was “talking head abraxas” and “sudden light abraxas”. 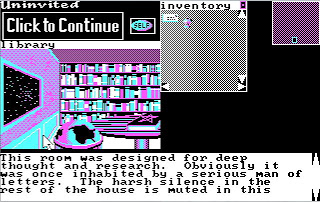 I must have died over thirty times already, like when my car exploded with me still in it, when I was torn to pieces by a ghostly woman, when I got trapped for eternity in a prison cell, when I was poisoned by some unlabelled liquid etc. etc. The most frustrating of these deaths has to be the ghostly woman that appears whenever I open any door on the ground floor of the house. She initially has her back turned to me, but no matter what I try to do next, she turns around and rips my face off. Until I figure out what I’m supposed to do with her, I can’t access any more of the rooms on that floor, but I don’t know whether that’s something I need to do early on in the game or later. As expected, the inventory system is killing me! I put items in it by dragging them into my inventory box and letting go, but unfortunately I can only carry a few items before I get a message telling me the item won’t fit and that I should try removing something from the inventory. This problem is majorly exacerbated by the fact you can pick up just about any item in the game, despite most likely not ever needing the majority of them. I filled my inventory within about three screens, so am constantly having to manage it. 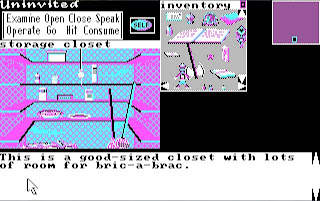 Oh great! My inventory is full and now there's a closet full of stuff!

So where am I at? Well, there’s a little creature that keeps running around waving a key at me, but I can’t see any way to get it from him. One of the journals suggests there’s a star hidden away in a hingeless box, but that they’re locked away and only a chair knows where the key is. That’s right...a chair! Well, I unsurprisingly don’t seem to be able to talk to any of the chairs in the house, so the message is obviously cryptic. Other than that, I have a bunch of masks, an enormous axe, some kerosene, a towel with blood on it and various other bits and pieces. I even have a bottle of No Ghost liquid, but when I tried to use the bottle on the Scarlett O’Hara looking undead chick, nothing happened. Oh...um...well I’ll be damned! While writing that last line, I thought I’d try the No Ghost liquid again to make sure I wasn’t making an idiot of myself. As I was doing it, I realised that the first time I tried it I didn’t open the bottle first. This time I did and she melted away like the wicked witch in The Wizard of Oz. I was about to ask for a hint from you guys, but it seems the game has just opened up to me. I’m not convinced that I won’t be back here asking for help shortly, but for now... 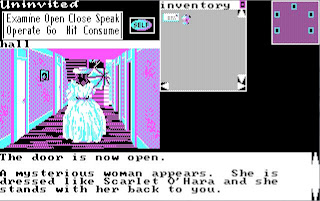 Watching the mysterious woman melt away, screaming in horror, pleased me very much
Posted by The Trickster at 06:00

Email ThisBlogThis!Share to TwitterShare to FacebookShare to Pinterest
Labels: 1987, Uninvited