Taran Wanderer Journal Entry 2: “What an emotional ride today has been. First I helped Princess Eilonwy escape the prison and found an awesome magic sword, and then I rescued a bard named Fflewddur from another part of the castle. I even managed to save Hen Wen and got her to safety right before the Horned King made her show him where the cauldron was. As if all that wasn’t exciting enough, I then visited a strange underground kingdom where King Eiddileg gave me some magic flying dust. I used it to access a witches’ house across the river and traded my magic sword for the Black Cauldron. Just when I thought I’d finally stopped the Horned King and his wicked scheme, a gwythaint stole the cauldron from me and took it back to the castle. Summoning the little courage I had left, I climbed the mountain back up to the castle, realising that the only way to stop the Horned King was to throw myself into the cauldron, sacrificing myself in the process. Just as I was about to do it, my loyal little furry friend Gurgi jumped into the cauldron instead, destroying the Horned King, his castle, and himself. My devastation at the loss of my friend was short lived, as the witches traded me his life back for the cauldron, meaning everything worked out in the end. Prydain is safe and I’ve got some great new friends!”

If the above rundown sounds convoluted, well you don’t know the half of it (unless you've played it of course). It took me a total of six hours to finish The Black Cauldron and I can’t say I had much idea what was going on half the time. I rescued people who never showed up again, was given items that played no part in the game, was constantly rewarded for counterintuitive decisions, and was left feeling empty during an ending that was supposed to be highly emotional. I don’t think Al Lowe had any idea how challenging it would be to take a movie plot and present it as an adventure game and I think he realised things were not going well when he bailed towards the end of the project. He managed to squeeze in a lot of the characters, items and locations from the movie into the game, but with no controlled plot or linear progression to tie them all together, you end up with a game only really enjoyable by those who already know what happens and can fill in all the gaps on the way. 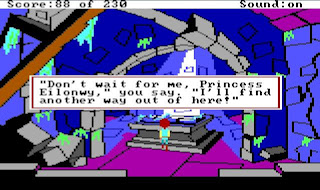 In other words, the game technology won't allow me to have a companion anymore so you better go

The perfect example of this is the character Gurgi. Gurgi is the little furry creature I met at the beginning of the game. I gave him an apple and he told me he was now my friend. I assume that Gurgi becomes a companion of Taran’s in the books and movie, and that they experience many things together through the course of the story. That would make Gurgi’s presence at the finale make sense and his sacrifice understandable and emotional. In the game, his sudden appearance and sacrifice is completely absurd, and it occurred at a time where the game told me what I was about to do (throw myself into the cauldron), when in fact I had no idea. It’s confusing, forced storytelling, and his sudden reincarnation at the end makes the whole thing meaningless. I was led to believe that the Black Cauldron would be destroyed if a live being got into it, therefore committing suicide in the process. Why then would the three witches bargain his life back (they also offered all sort of other treasures) for a completely non-magical cauldron? 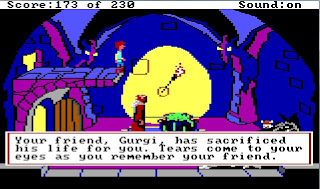 There is one notable positive to come out of The Black Cauldron and that is the use of a branching storyline. There are numerous ways to “complete” the game, with all of them ranging in satisfaction and points. I first completed the game by sacrificing myself into the cauldron as soon as I got it (therefore making it powerless and not allowing the grythaint to steal it), but that resulted in only 173 points, and the game hinting at the fact this was not the ultimate finish. I then restored and let the gwythaint take it (yet another example of the game rewarding me for counterintuitive actions), and was then able to go to the castle for the big finale (where I apparently just try to sacrifice myself anyway!!!). I’ve since read a walkthrough to see what other ways there are to complete the game, but most of them revolve around which of the witches’ offers you accept on the way. There’s no doubt that the branching storyline merely adds to the confusion in the case of The Black Cauldron, but it should be noted that this is the first true example of a technique that would become popular in the genre and eventually used very successfully. 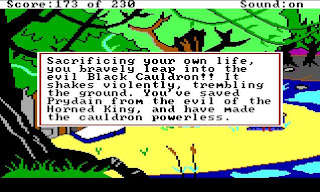 Seemed like the logical thing to do, but it's not what you wanted me to do is it Mr Dungeon Master

I can’t say I didn’t enjoy The Black Cauldron at all. When I knew what my goal was and could just focus on achieving it, there was much fun to be had. But it has to be said that the game is pretty hard going for someone with no prior knowledge of the story, and the pioneering features (non text parser interface, branching storyline) are not implemented anywhere near as well as they would be down the track. Al Lowe and his crew were on a hiding to nothing with this game. Players who know the story from either the books or the movie would breeze through it. Players who don’t know the story won’t have much idea what’s going on. Either way, it’s not very satisfying, so I now know why it kind of disappeared into obscurity while so many other Sierra games have hung around. I’m happy that I got through it and can move onto something else. 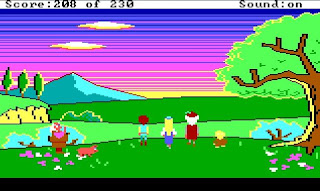 One big happy family of strangers
Posted by The Trickster at 06:00

Email ThisBlogThis!Share to TwitterShare to FacebookShare to Pinterest
Labels: 1986, The Black Cauldron