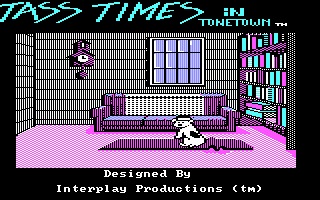 ﻿Tass Times in Tonetown was written by Infocom designer Michael Berlyn and his collaborator Muffy McClung Berlyn. Michael had already played a role in the creation of many well-known Infocom interactive fiction games including Suspended, Cutthroats, Infidel and Zork: The Undiscovered Underground. The programming for Tass Times in Tonetown was done by Bill Heineman, one of the founding members of Interplay Productions, who also programmed the classic RPGs The Bard’s Tale III and Dragon Wars. While it has very little to do with the topic I’m covering, my research into Heineman has unveiled some very interesting information that I simply had to share. You see Bill is not only a video game programmer, he’s also the first person to ever win a national video game contest (he won the National Space Invaders Championship in 1980), an author of novels including quite a few based on The Terminator and Independence Day, and most interestingly, a woman. After he was diagnosed with gender identity disorder in 2003, Bill transitioned into a woman, and is now known as Rebecca Heineman. 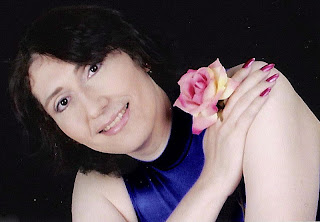 Anyway, back on topic, Tass Times in Tonetown is a graphical text adventure. That means the game is really a text parser based adventure game that includes a static graphical interface window. You can “interact” with things in the graphics window by selecting from icons representing actions such as pick up, drop, talk to etc. and then clicking the object you want the interaction to occur with. This form of intuitive GUI is combined with a text parser, but I’m yet to fully understand how the two work alongside each other. The working title of the game was Ennio: The Legend Begins, referring to the dog that appears in the game, but this was changed to the very strange Tass Times in Tonetown prior to release. The explanation behind the name is that Michael and Muffy were employed at Harvard University, which has the motto Veritas (meaning truth). The two of them had started using the phrase “very tass” to mean very true, and eventually they used the word extensively in the game, where it’s used as a replacement for words like “cool” and “hip”. 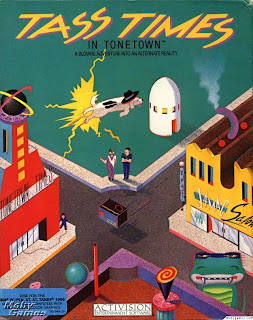 Everything about this game looks truly bizarre, including the box cover

﻿Before I go load the game up, I should mention that I’ve found myself a PDF version of the manual and also the newspaper that came with it. I believe the newspaper acts as a form of copy protection, by making the player look up various things while playing, so it’s fortunate I’ve got my hands on it. There isn’t really a backstory to speak of in the manual, so I still have no idea what the game is actually about. There is however a song that doesn’t alleviate the feeling that I’m about to plunge into a very strange world. I’ve copied it below so you too can experience the wonder that is Are You Tass? Are You Tone? Anyway, it’s time to enter Tonetown and I’ve got a feeling I could be there a while. This sort of game can take quite a bit of time, not to mention mapping, to complete, so I don’t expect to rip through it in the sort of time the last few games have taken. Here’s hoping I get far enough into the game to report back in the next day or two. 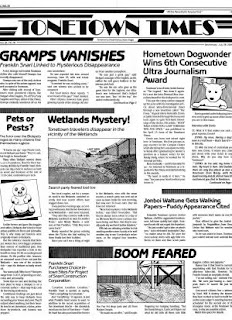 ﻿Are You Tass? Are You Tone?

Are You Tass? Are You Tone?
Somebody's vanished -- through a hoop -- into the unknown.
Or have you been here before, under a triangular moon?
Do you wear a Troppo look or is it Jonboi Waltune?

Sleuth out the cabin. The clues may unjar you.
Where the Dogwonder leads leaping -- will you follow?
The mystery unravels in a different dimension,
But your guide by your side is none other than "The Legend."

Tonetown is hometown if you're ultra plus chic.
In need of some styling? Just visit the 'Tique.
Bangle up some hooplets, lay down some picks,
Jump on a jumpsuit, then to Freddie's for kicks.

But wait -- read the Times -- enigma on enigma.
The truth? Wrapped in darkness. Something to dig for.
And evil lurks -- snarly, underworldly-wise,
Three ways times three ways he plots your demise.

So get to unriddling, stop fiddling around.
If you're here as a tourist, Tonetown's not your town --
If you loop through the hoop, you must loop it alone.
Are You Tass? Are You Tone?
Posted by The Trickster at 06:00