Well I can’t start this post without mentioning the news that Chet from the CRPG Addict blog has decided to call it quits, at least for the time being. I won’t talk about this too much now, but I will come back to it shortly. All I’ll say for now is that I’m feeling a bit empty and disappointed (not with Chet, I totally understand and respect his decision). I obviously owe a great debt to his work and have thoroughly enjoyed every single post he's written since I started following around twelve months ago. As for The Adventure Gamer, it doesn’t change anything. It’s all systems go and I still have every intention of seeing this monumental project through to completion. It’s time to apply the PISSED rating system to The Black Cauldron.

Puzzles and Solvability:
If you’ve read my previous posts on this game, you will probably have guessed the categories I’m going to give low scores, and this is one of them. It’s not really that there’s much I can label illogical throughout the game, it’s more that the lack of explanation for what’s going on and what character’s roles are makes knowing what to do next and how to do it very difficult. When Disney told Al Lowe that the game should closely follow the movie, I don’t think anyone was aware of how isolating and confusing the result would be for players that haven’t seen it. Things happen all the time that would normally make the player restore and try again (ie. Hen Wen gets captured when your only quest is to protect her and the cauldron gets stolen away by a gwythaint as soon as you get your hands on it), but since these things happen in the movie, they had to occur. As Zenic commented on one of my posts, the better way for these events to occur would be to remove player control temporarily (therefore making it clear that you are supposed to let it happen), but that wouldn’t allow for the branching storyline to occur in many instances, so I do understand why the developers didn’t do that. I still don’t really understand what several items were supposed to be used for and I assume this is because I didn’t partake in the storyline where they would be utilised. The result of this is that I wasted ages trying to make use of items that were actually never going to be of benefit to me. I’m giving the game a P rating of 3. 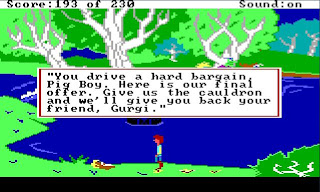 Interface and Inventory
Al Lowe deserves some credit for creating a graphic adventure computer game that doesn’t require the player to type commands into a text parser. The simplified replacement system means the player only needs to know what four function keys do (INVENTORY SELECT, USE, DO and LOOK) to make their way through the entire game. The downside of this simplification is that the player feels very limited as to what they can do. Unlike text parser based games and future point and click games that allow you to request information about pretty much anything onscreen, the system used for The Black Cauldron means you can only ask for information about (or interact with) an item you are directly next to. This is not a massive issue (there are very few instances where you can’t gain access to whatever it is you want to get info on or interact with), but there’s just something about it that distances the player from the experience. Perhaps it’s just that the amount of possibilities that are available on each screen is drastically reduced, making the game seem less open. If I weigh up the pros and cons of the changed interface (PROS – simplified, text parser flaws removed CONS – less interaction and information available, navigation flaws unchanged), it’s probably on par with the other Sierra games. As for the inventory, well it functions the same way it does in other Sierra games, with one exception. You have to SELECT an item from the inventory before you can USE it. 5. 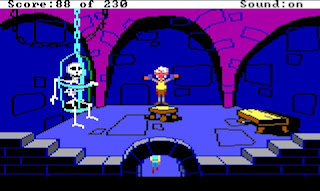 Story and Setting
Everything I’ve read suggests Lloyd Alexander’s books are really very good. Unfortunately, the nuances of that story were damaged when transferring it to cinema screen, and further damaged when put into the framework of Sierra’s AGI technology. Ignoring everything it’s based on, the story of the Black Cauldron game is bewildering and unsatisfying, no matter which branches you choose along the way. I won’t repeat the issues I’ve had with not knowing what character’s roles are and which events are part of the unravelling plot as I’ve banged on about them already. At the end of the day, the storylines of adventure games are very often set in stone, so players are not really making choices as much as they are solving puzzles to make it progress. I take issue when the choices the game has made for my path are either not the ones that I want to make or are completely unexplained. The setting of this story, Prydain, is represented well enough graphically, although it has to be said it looks and feels a heck of a lot like a King’s Quest game. It also feels very small, making Taran’s big adventure to reach the Horned King and the Fair Folk people seem a bit laughable. The Fair Folk people are around two screens away from his home and the Horned King’s castle around five. I’m going to be unsympathetic here and give the game a 2 for Story and Setting. 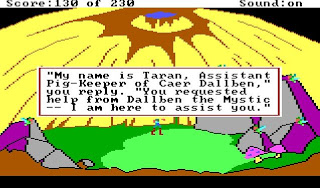 I honestly don't think I was ever informed of this request for assistance?! Anyone know when that supposedly happened?

Sound and Graphics
As I’ve mentioned previously, The Black Cauldron looks visually just like King’s Quest, with an added darkness to some screens achieved by nice use of blues and purples. I can’t say I noticed any increase or decrease in quality for the animations and illustrations when compared to the likes of King’s Quest III or Space Quest. Having not watched the movie in decades, I can’t say whether the sparse cases of music have any connection with it (or the visuals for that matter). I can say however that they managed to make the music particularly grating this time around, with high pitched, ear aggravating tones frequently used. It’s used so sparingly that it doesn’t really have a great effect on the enjoyment of the game, and it was probably particularly noticeable for me due to my attempts on every screen at finding a use for the lute I found early in the game. I ended up offering it to the fair folk as a gift, so the abuse my ears suffered during that process was all for nought. I’m sticking with the Sierra 5 that I’ve repeated a few times already. 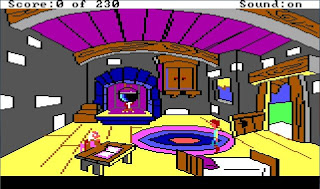 Environment and Atmosphere
The general forests and lakes of Prydain look identical to King’s Quest, so are not really worth talking about, with the exception of the darker forest screens to the west. The trees here contain ghost like faces which when combined with the dark colour tones successfully produce a foreboding atmosphere. The same can be said for the castle scenes, which also benefit from a sense of imminent capture, which as it turns out it’s completely applicable (you’re chased around on nearly every screen). Overall the atmosphere of The Black Cauldron is fairly compelling, which is probably why I continued on to the end despite struggling to understand what was going on and what I was supposed to be doing. 6. 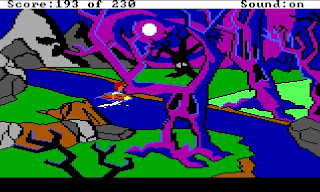 Spooky trees! Reminds me of watching Poltergeist when I was too young to be doing so

Dialogue and Acting
I don’t have a heck of a lot to say for this category either. The simple style found in other Sierra adventure games (straightforward location and item descriptions, simplistic story narration, and very sparse NPC interaction) is used for The Black Cauldron. Apart from the one irritating bug in description I found while scaling the castle wall, I can’t say I noticed anything particularly negative or positive to announce for this category, meaning I probably should stick to the 4 I’ve given the majority of past Sierra games. 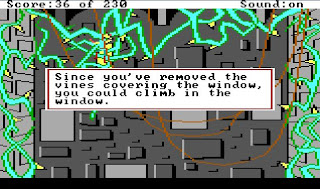 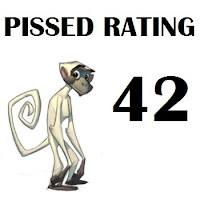 That’s a 42 for The Black Cauldron, which appropriately makes it the lowest ranked game I’ve played so far for The Adventure Gamer. It’s a bit disappointing really as I was hoping to find a lost treasure that has been unfairly ignored over the years. Instead, it’s clearly the least successful use of the AGI system I've played to date, and a wasted opportunity to bring Alexander’s world and characters to the screen. Now...what on earth is Tass Times in Tonetown all about!?﻿
Posted by The Trickster at 06:00

Email ThisBlogThis!Share to TwitterShare to FacebookShare to Pinterest
Labels: 1986, Introduction, The Black Cauldron