Journal Entry 3: “After making such great progress towards my goal of defeating the Warlock Lord, I now find myself lost and with very little in the way of resources. I fear this will be my final entry before taking my life. The shame of failure is too much! I’m quite sure that I’m rapidly losing my mind anyway, as some of the things I’ve seen and heard in the past two days simply cannot be part of this reality and must be the projections of a subconsciousness besieged by frustration and failure. I constantly hear voices! What’s worse is that I’m quite certain whoever is speaking to me is trying to help me make progress, but I am unable to understand their bizarre dialect! “Gbqnl vf gur svefg bs ncevy. V'yy unir n erny cbfg fbba.” What does it mean?!?! Anyway, it turns out that all my previous success was an illusion. While I thought that damn wizard Lakmir had transported me to Castle Shadowgate, it turns out he missed the mark by some way, and I’ve been forced to travel many leagues in search of it. I’ve used many strange forms of transportation on the way, but I must have taken a wrong turn at some point. All that is left is to end this miserable existence. I cannot face a world where the Warlock Lord rules, knowing that my failure led to his success...” 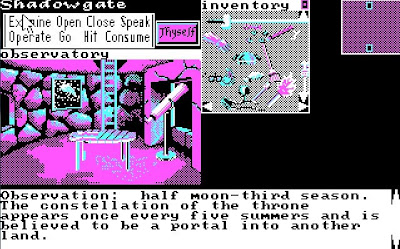 When I last posted, I’d just defeated the fire drake and was about to go through the door at the end of the bridge. I was feeling pretty good about myself too after having a fantastic game session where everything was coming together nicely. Little did I know that Shadowgate was about to pull the rug out from underneath me. As soon as you get across the bridge, the game starts jumping genres in the most unexpected way and I’ve had to pinch myself numerous times and check that I hadn’t accidentally started up the wrong game. I’m all for adventure games adding in little mini games that make use of other genre styles, but it’s important that the game at least stick to the tone it started with, and Tarantino-like shifts midway through are just not cool. After being informed that I was not actually in Castle Shadowgate at all, the game unbelievably switches to a top down view where you’re forced to wander around the landscape looking for clues that might lead you to the correct destination. Every now and then you come across cities, where you can buy resources and even hone your skills (what, is this an RPG now!?) 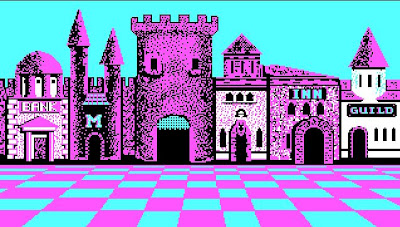 One of many cities you come across, all of which look the same 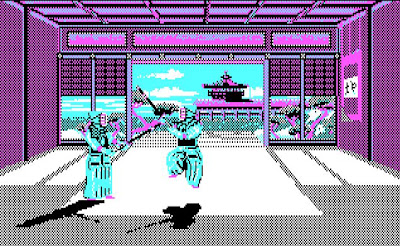 The warriors become progressively harder each time you win

As off-putting as this shift in gameplay and perspective was, what happened next is just unfathomably ridiculous! When departing cities, you get the chance to purchase forms of transportation; including the sort of technology that just doesn’t belong in what I originally thought was a swords and armour style adventure game. At first a selected a car, but as decent as the graphics were while driving around, the sameness of the landscape made knowing what direction I was going extremely difficult. With no minimap available in this mode, I figured I was just going to get lost really quickly, so I restored back to the last city and took the second option available, the submarine (you think I’m joking?)! At least the view from the submarine gave me directional bearings, so I was able to have a fair idea where I was going. Unfortunately, you can’t reach Castle Shadowgate by sea alone, and when I was informed at one of my port stops (you have to stop to refuel way too regularly) that the only way to reach the castle was by air (what is this? Howl’s Moving Castle?), I left the ocean and went in search of some sort of plane. 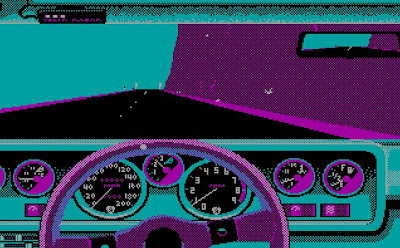 Driving is quite fun, but the landscape doesn't change much 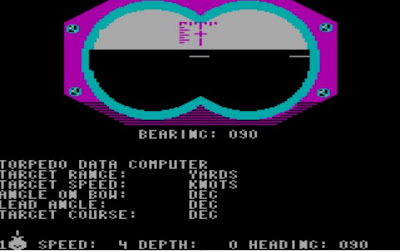 If you'd told me I'd be in a submarine a couple of days back...

By this stage of the game, I was pretty much prepared for anything. But I still had to laugh when I uncovered a space ship in an uninhabited warehouse in the middle of nowhere. It’s here that some of the parchments I’d read earlier in the game started to make sense. “Five to find, three are one.” It’s clearly talking about the modes of transportation and the spaceship meets the description of “three are one” as it allows you to travel under water, along the ground, or even into space. Having already covered land and sea, I cranked up the engine and flew out into space, thinking that the developers at ICOM had clearly played Ultima at some point. It’s here that I finally got completely lost, and to be honest I no longer really care about finding the Warlock Lord. Shadowgate had finally won me over, despite all of my initial fears, and then it all just turned bizarre and I have to question the sanity of whoever decided any of this was a good idea. I actually found a way to kill myself in the game, so I decided that was the best way to end my session. It’s the first game on the list that I haven’t finished which is a shame, but I have better ways to spend my time. 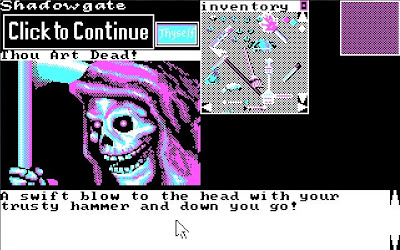 The game should at least be remembered for being the first to allow suicide!
Posted by The Trickster at 10:19