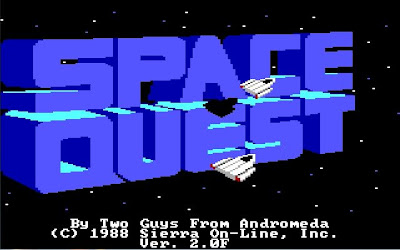 I’m very grateful for the way the list of games I’m following just so happens to split the more challenging (aka maddeningly frustrating) games with friendlier, enjoyable Sierra outings. After Uninvited nearly killed me, Leisure Suit Larry gave me a few days of joyful entertainment to cleanse the palette. The memories of the bewildering Mortville Manor were also quickly forgotten when Police Quest eased me through the day in the life of a police officer. Now, after spending the last week struggling through Shadowgate, I get to put on my spacesuit and prepare for the intergalactic hilarity of Space Quest II. I also have the benefit of having played this particular game before, so unless my memory fails me, I should be able to go into cruise control and just enjoy the ride while it lasts. The main challenge will be making sure I judge the game appropriately and don’t avoid possible dead ends and difficulties due to my prior experience with the game. I know Space Quest II is renowned for being quite tricky and I have no idea whether I required a walkthrough at any stage the first time I played it. 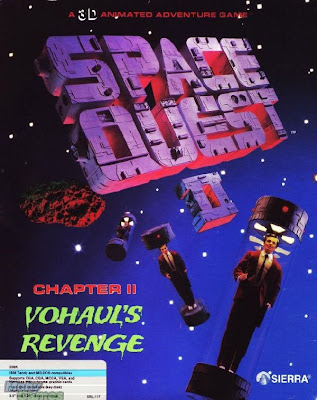 I'd like to take this opportunity to thank Moby Games for having every cover of every game ever made in decent resolution (yes, I stole it)

Given how successful Space Quest I was, it was inevitable that Sierra would crank out another one in quick time.  Once again it was The Two Guys from Andromeda (Mark Crowe and Scott Murphy) behind it all and the result was Space Quest II: Vohaul’s Revenge. Released on the 14th of November 1987, the game takes place sometime after the protagonist (now officially named Roger Wilco) had “foiled the Sarien’s fiendish plot to rule the galaxy by using the Star Generator as their weapon of destruction”. Unfortunately, as time had passed, Roger’s fame had diminished, and he’d eventually had to return to his job as a janitor. The player joins Roger after he’s been transferred to Orbital Station 4, where the game describes him as “sweating like a pork-beast in a pressure suit while relocating space debris in zero gravity”. Little does Roger know that the villainous Sludge Vohaul witnessed him on television, egotistically describing his exploits and mocking the stupidity of “some guy called Overhaul, or Uhaul...something stupid like that”.  Filled with rage, Vohaul sends out his mercenaries, intent on getting his revenge. 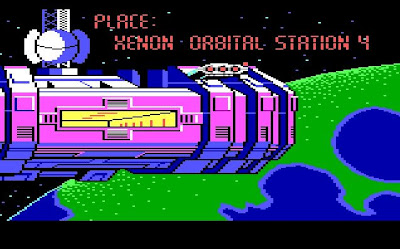 While Sierra themselves have never remade Space Quest II, there is an unofficial remake by Infamous Adventures available to download. While that looks worth checking out one day, I’ll be playing through the version of the game as it appears in the Space Quest 1 + 2 + 3 collection which I purchased from GOG. Thankfully it comes with the great comic Space Piston that not only acts as the manual for the game, it also gives the reader a rundown of the events of the first game and what has occurred since, in comic book form. It’s also got some pretty funny advertising (which reminds me of the newspaper that accompanied Tass Times in Tonetown) selling objects ranging from Incredible Shrinking Tablets to Death Ray Specs. It’s all done with the same humour and wit that pervades the Space Quest series in general and a welcome reintroduction into the outlandish game world that I'll be spending the next few days. I’m very much looking forward to playing Space Quest II again, and will undoubtedly be back in the next couple of days with an update on my progress. 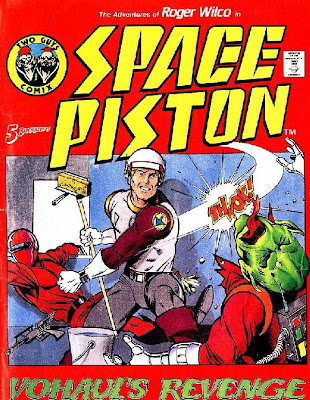 The comic doesn't make a lot of sense..but it sure looks good and will have you chuckling throughout
Posted by The Trickster at 22:29