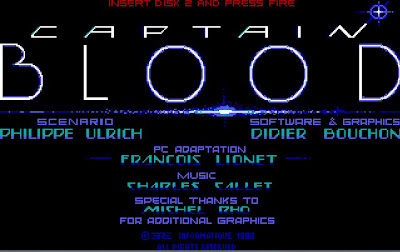 It’s time for something a little bit different. It’s not conclusive whether or not Captain Blood (known as L’Arche du capitaine Blood in French) should be considered an adventure game, but when I put it to a poll, the community made it clear that it’s a game you want me to play regardless. Made in 1988 by ERE Informatique and released by Infogrames, it sure looks like a strange piece of work. One gets the feeling that Didier Bouchon and Philippe Ulrich, the game’s joint developers, might have been partaking in a bit of the old happy stick during its creation. Bouchon had originally been hired to design covers for Ere Informatique’s releases, but he quickly learnt to program in the Atari ST’s assembler after Ulrich provided one for him. The assembler allowed him to create a fractal generated real-time graphic system, impressing Bouchon enough to join forces and develop a science fiction game.

The resulting game seems to avoid genre classification, being some sort of adventure, space simulator, strategy hybrid. It was first released on the Atari ST, but eventually was ported to C64, Macintosh, Amiga, Apple IIGS, PC and various 8-bit platforms such as the ZX Spectrum. Due to all the differences in these technologies, each of the ports had variances in graphics and sound, and not surprisingly it’s the Atari ST version that looks and feels the best. As usual, it’s the PC one that I’ll be playing, and if you’ve read my Request for Assistance post earlier this week, you’ll know that it’s taken a fair bit of effort just to get to the point where I can play the game with the desired graphical quality. The short of it is that there are at least two different versions of Captain Blood out there for download, and the EGA one only works in DOSBox if you run it from an actual floppy image. 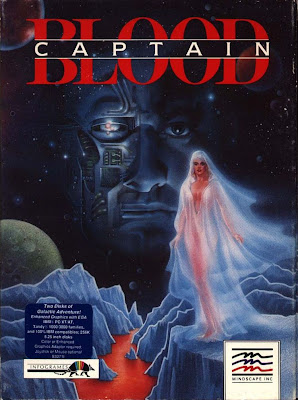 The US Captain Blood box. I wonder whether the woman plays any role in the game

I’ve found a PDF version of the manual (thankfully given how complicated it all looks) and also come across the Captain Blood novella, that I think came with the original release of the game. The story is just bizarre and goes something like this: Bob Morlock, a game designer who goes by the name Captain Blood, develops a new video game based around space travel and communications with various alien races. On completion of the game, Morlock starts it up for the first time, only to find himself sucked into his own gameworld. Appearing in a spaceship of his own design, Morlock (now solely going by the name Captain Blood) is forced to go into hyperspace to avoid imminent danger. Unfortunately, something goes wrong, with the end result being that Captain Blood is cloned thirty times, with each of the clones holding onto part of his vital fluids. He spends the next 800 years tracking down the clones and regaining his vital fluids a piece at a time, but while he manages to hunt down twenty-five of them, the remaining five have evading him. 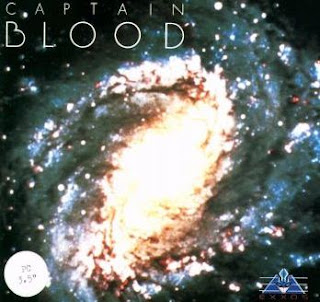 This is where the player comes in. Tasked with tracking down the remaining five clones and disintegrating them, the player must communicate with aliens on numerous planets to try to get the coordinates of the final five. To reach the aliens, the player must send out crafts, which are actually living beings called OORXX’s, guiding them through canyons to the landing spots, where communication takes place. This communication appears to be handled through the use of 150 icons, with each race of alien speaking in different ways. I’ve had a quick go at it, and while I get the idea, it seems that it’s going to be extremely difficult to figure out what to say to each alien when there are so many icons to choose from. Given the rather cult following the game has (it even spawned a sequel called Commander Blood a few years later), I can only imagine I’ll eventually come to grips with it given enough practice, and I look forward to the challenge of what is clearly a very unique game on the list. 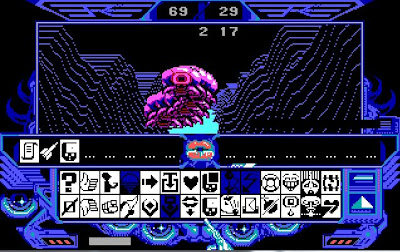 24 of the 150 possible communication icons. Happy days!
Posted by The Trickster at 18:24