Journal Entry 4: “The deed is done and the Warlock Lord is dead! The odds appeared overwhelmingly against me, but I have prevailed, proving once and for all that my destiny is truly controlled by prophecy. I now know that the “five” the parchments described are in fact items of power. The first was a spike guarded by a werewolf in one of the castle turrets, the second a talisman guarded by a wyvern in another. The third item was an orb hidden in the depths of the castle and guarded by a griffin, the fourth a platinum horn guarded by a demon hound. Collecting these items was difficult, but the last of the five, the staff of ages, was the one that evaded me the longest. Guarded by a serpent in a cave, accessing it required crossing the rickety bridge I avoided at the beginning of my quest. Even once I figured out how to cross the bridge and subsequently knew of the serpent’s location, discovering the method of defeating him proved quite a challenge. I solved it eventually with a wand uncovered on the castle balcony and once I held all five items in my hands, I was finally able to read the parchments in my possession and make sense of them. “Five must thou find. Three for the staff, one to be the key, and one to be thy pathway.” The talisman and the horn were used to gain entrance to the Warlock’s cavern, and the remaining three were combined to give me the weapon I needed to defeat the Warlock Lord’s behemoth. As the monster went down, it took the Warlock Lord with it, completing my quest. Finally I can leave this cursed place.” 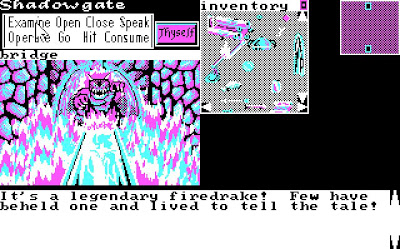 Bobbyloathesyou requested a screenshot of the fire drake. Here it is!

Shadowgate is finished! I should feel very proud about that achievement, but I’m afraid the whole thing is tarnished by the amount of hints I required to get to the end. All up I have very mixed feelings about the game and I’m sure that will be obvious over the rest of this post and the final rating post when it comes. I’m not going to run through exactly what occurred between the last post and this one, as I was forced to do a heck of a lot of going back and forward, restoring to earlier games several times, and even restarting at one point. Instead, I’ve decided to split this post into the five items that are required to finish the game, and my experiences while trying to recover them. It has turned out to be a very long post (around 3000 words!), so I’ve decided to split it into two. I’ll post part two tomorrow and the final rating post on Friday. 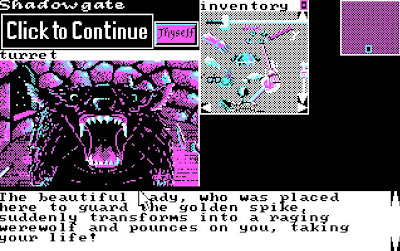 This is where I was stuck at the end of the last post.

The Spike
I actually hadn’t got my hands on any of the five items needed to complete the game when last I posted, and I’d only found one key out of three needed in the banquet hall to proceed. I’d just made my way to the top of the first turret, but couldn’t figure out how to get the spike (the first of the five items I came across) from the beautiful woman without her turning into a werewolf and tearing me to shreds. This turned out to be fairly simple and despite the fact he hadn’t reached this part of the game yet, Charles questioned whether I’d tried using the silver arrow. I hadn’t, but as soon as I read his suggestion I knew it would be the right one. My failure here was definitely my own fault and not the game's, but in my defense, I’d assumed that the arrow only had one purpose, which was directional rather than as a weapon. The inventory limitations just don’t allow the player to carry all the items they come across, so decisions have to be made as to which ones you feel might be useful later on. I was wrong when it comes to the arrow, and since I never noticed that it was made of silver, it never entered my mind when I was trying to defeat the werewolf. Anyway, “operating” the arrow on the woman killed her and the spike was mine. The first item was collected, although I had no idea of its importance at the time. 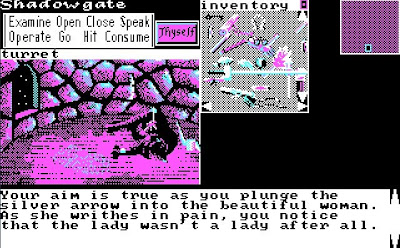 I hear this happens in Thailand quite a bit

The Horn
After getting the spike, I wandered around aimlessly for a while, unsuccessfully looking for something I could use it on. Eventually I gave up and started going through my parchments again, looking for a clue. One of the spells caught my attention, and not for the first time either. “Lands under the heavens; the key to the world. Terra Terrakk.” Surely I was supposed to cast this spell on the globe in the study, but I’d already tried previously with no luck. I went back to the study to have another go. I selected “Speak”, clicked on the globe and typed “Terra Terrakk”. Nothing happened! This is how all the spells in Uninvited were cast, and given that I’d cast the EPOR (rope) spell using the same technique earlier in Shadowgate, I never for a second thought that I needed to take a different approach. It crossed my mind that perhaps the spell wasn’t working because I didn’t have the parchment in my inventory (there was no need to hold onto them in Uninvited and since they take up valuable inventory space, it was preferable not to), so I went and got it from where I’d left it and came back. “Terra Terrak”…nothing! Out of sheer desperation I tried “operating” the parchment itself on the globe and it opened up, revealing a key and a bottle. 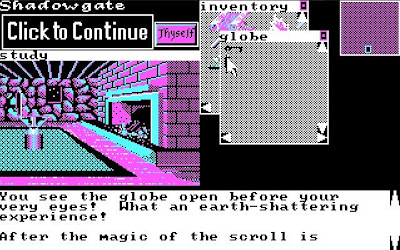 Oh stop it! My sides are hurting!

This is the first example of Shadowgate changing the rules from the blueprint that was set in previous ICOM games. There is no mention of this change in the manual and I didn’t come across anything in the game itself to inform the player that you need to "operate" the spell parchments to cast spells. What this means is that the rope puzzle is the only time in the whole game where you’re required to use the “speech” action, and now that I think of it, I never once had to use the “hit” or “consume” actions at all, which begs the question…why are they there?! Finding out this piece of information changed things a lot, and I quickly ran back to where I was storing all the items I couldn’t fit in my inventory and made room for the remaining two spell parchments. Before I even considered looking for a place to use them, I had a new key, which I quickly took to the banquet hall and unlocked the second door. Through the door was a chamber with a horn sitting on the ground. When I tried to add it to my inventory, a demon dog appeared out of nowhere, threatening to attack me. Something I haven’t mentioned yet is that while I was looking for a place to use the spike, I spent quite a bit of time in the laboratory. I knew the chain attached to the floor had to have a use, and eventually I simply “operated” it. This revealed a bottle of holy water, which is an obvious weapon to use against a demon dog! It vapourised, allowing me to collect the second item, the platinum horn. 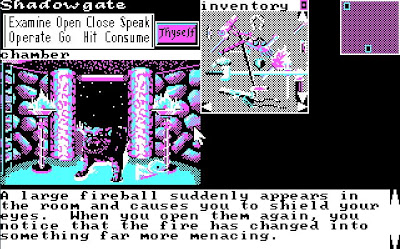 Oh come on...can't I just pick up one of these items without some horrific beast trying to eat me!

The Talisman
This was by far the easiest of the five items to retrieve. A ladder from the cavern where the dog guarded the horn led up to the second turret, where a Wyvern aggressively guarded a talisman in the stand. I systematically “operated” the items I had in my inventory at the time, hoping that one of them would do the trick. Using the sword resulted in an angry wyvern wrapping its tail around my neck and strangling me, as did using the “instantum illuminaris” spell, the sceptre, a torch, and the fire poker. Eventually I got to the shooting star that I’d plucked from the galaxy map in the observatory. It fired across the screen the way it normally did, but this time it made contact with the wyvern and destroyed it. Trial and error wins the day, and the third piece of the puzzle was in my possession. So that’s three pieces collected with only one hint required. So far so good! Surely it would only be a matter of time now right? Well...things were about to get nasty! 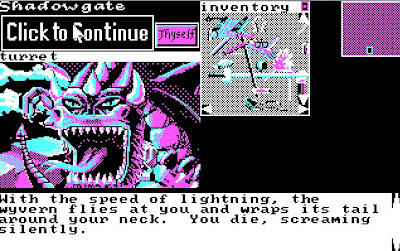 Email ThisBlogThis!Share to TwitterShare to FacebookShare to Pinterest
Labels: 1987, Shadowgate