Thanks to everyone that voted in last week’s poll and particularly those who commented. The question was “would you prefer more or less detail in Adventure Gamer posts?” and the results are as follows:

It’s nice to see that only one person out there doesn’t like detail, particularly as my tendency is to go overboard in that direction. I’m afraid that this might not be the blog for that particular reader. While I didn’t purposely make my posts on Shadowgate the most detailed I’ve written so far (the game demands a lot of explanation and I needed a lot of help), it did coincide with the poll quite well. Since 88% of voters like detailed posts to some extent, I’ll continue on in the fashion I have been. I’ll try to keep myself in check, but don’t be afraid to tell me if you think I’m crapping on too much. 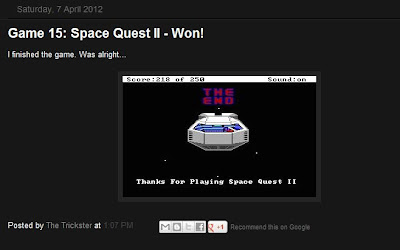 Here's my Space Quest II review for that one reader that doesn't like detail.

There were a few requests that came out of the poll. One was for more screenshots, which I will happily implement, starting with Space Quest II. Another request was to announce spoilers. I’m not really sure how I could manage this one. After all, the majority of what I post is about my struggles to find solutions to problems, and then eventually how I solved them. I know that some readers intend to play the games themselves and some, such as Charles, like to play through them at the same time. I want to encourage this and I really enjoy knowing that others out there are going through the same experience as I am almost simultaneously, but if I avoid giving away spoilers, I don’t think this blog would be very interesting. I tend not to mention actual solutions in the introductory journals to each post, so if I make an effort to avoid doing so in future and merely describe the “story” elements, would that help those of you that want to know where I’m up to without ruining the experience for others?

Time for another poll! By the way, I do struggle to come up with these sometimes, so if anyone has any ideas for future polls, I’m all eyes. This week’s will be a little more fun after last week’s serious topic. Who is the best playable female character in adventure game history? Choices are: