While there were a few surprises in the results for last week’s poll, the winner was not at all surprising to me. In fact, I actually created the poll to see whether my fondness for April Ryan was the norm or an anomaly. The question was “who is the best playable female character in adventure game history” and here are the results: 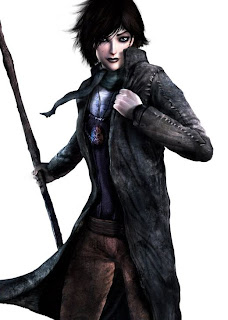 April Ryan - No journey would be too long

It’s not at all surprising that the winner comes from a more modern series of games, especially given the improvement in graphics and the increased quality of voice recording that has entered the genre over the years. April Ryan is a very special character for me as it was The Longest Journey (and its sequel Dreamfall) that reintroduced me to adventure games a few years back. I found the voice of April (by American Sarah Hamilton) to be really captivating and lovely, and the story she took part in truly fantastic. I remember really wanting to find out who the voice actor was and to see whether they’d done any other games, which is not something I’ve ever considered doing before (well, apart from Shodan, but that’s not an adventure game). 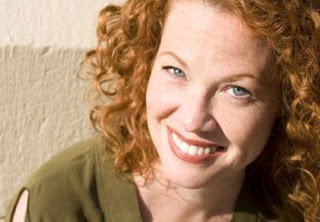 Sarah Hamilton - Gave April the innocence, the charm, and the strength she needed

What’s intriguing for me is the amount of votes given to Laura Bow, who hasn’t graced monitors (well, not in any new games) since 1992. The series (which is made up of The Colonel’s Bequest and The Dagger of Amon Ra) just keeps popping up in recent discussions and I’m really looking forward to playing it. Kate Walker is also an interesting character to me. There’s so much to like about her, and the Syberia games are excellent, but I just didn’t like the voice they used for her. It was pompous and humourless, which stopped from really warming to her. 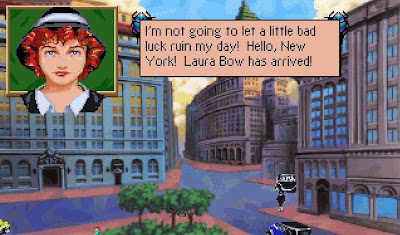 Laura Bow - Hang on a second...she looks like Sarah Hamilton!

It’s time for another poll. This week’s question is “Do you actually still play old adventure games or do you just like reading about them?” I know a few of you definitely play them, but I wonder what the ratio is. Only one way to find out...
Posted by The Trickster at 14:19