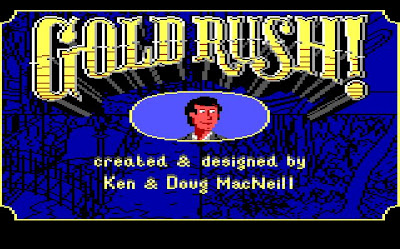 I kind of expected to see Charlie Chaplin pop up

You can just picture how the meeting might have gone between Sierra big boss Ken Williams and the MacNeill brothers.

The MacNeill Brothers - I'm not sure what's older. Their clothes or that computer!

Sierra were clearly still looking to expand their reach and they’d so far been able to do so by applying their AGI adventure game engine to different genres, creating profitable series with next to no risk. When the MacNeill brothers brought him the idea of Gold Rush!, I can’t imagine he had to think for very long before giving the green light. Both MacNeill’s had already proved themselves on various games (mostly in the King’s Quest series), so as long as they had a decent story in mind, it must have seemed like easy money. But for some reason Gold Rush! has always remained one of the lesser known Sierra games. I can only assume that the setting of the game just didn’t connect with very many gamers, particularly those outside of America. It’s generally regarded as a pretty good game from what I can tell, but it never really took off the way the classic Sierra series did. 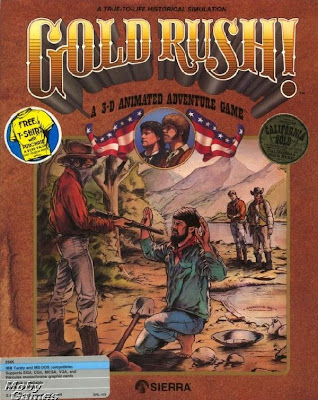 Did these guys really think their game was "3D Animated"?

Set in 1848, the player takes on the role of Brooklyn newspaperman Jerrod Wilson. The aim of the game seems to be to get from Brooklyn to Sacramento to find Jerrod’s long lost brother, but I’ve chosen not to read anything further in case I come across spoilers. I do know that it’s notable for having multiple paths available, and that it generally tried to push the AGI technology as far as it could go. I look forward to seeing how that plays out and what the MacNeill brothers managed to achieve with what was already a rapidly dating engine. I’ll be playing the game in DOSBox and have found a PDF version of the manual and printed it out. Thankfully, despite the game apparently being historically accurate, the manual isn’t filled with Police Quest style instructions. Finally, thanks to Chumazik and Fenrus for pointing out that playing Gold Rush! using the faster speeds stops the game’s timer from running, meaning certain events never occur. I’ll have to play at normal speed. It's time for some adventuring fun!
Posted by The Trickster at 12:25